Use the above links or scroll down see all to the GameCube cheats we have available for Hunter: The Reckoning. 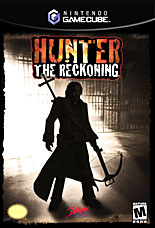 Stand in the trash can. You can kill all the zombies at the beginning, then when he appears, just run back to the trash can and kill everything that comes at you. Watch the boss for his ground attacks and jump up to avoid them. If he starts to hit you, jump out, run around, then go back to the trash can. When you jump out you can always run to the Glyph and heal before returning.

Defeating The Man With The Knives In His Hands

To defeat him, you must destroy the chair at the top of the room. First, get the rocket launcher and flame thrower found during the level. When fighting him, run in circles so he cannot get you (Martyr recommended) while shooting the chair with the launcher. When you run out of rockets, use the flame thrower. Note: The chair will shoot out blasts of "energy" unexpectedly. Burn the chair from the sides. With the chair out of the way, run in circles while shooting him. If you run out of rockets and gas for the flame thrower restart the game, as the other guns do almost nothing to the chair.

As any character, grab the machine gun at the lower left of the screen. Use any weapon to hurt the Boss. When he goes to recharge, run to the big window in the room and unload your Uzi, Shotgun, Chainsaw, or other weapon into it until it breaks open and the Boss dies. You can pretty much ignore him when he returns from getting charged, since you will be standing on a Health Glyph while destroying the window. Vampire and sunlight equals death. When you get to the last Boss, do not free the three locked up innocents unless you have low remaining lives. Freeing them will make the Boss have two more images of himself, creating three Bosses, but only one will be real.

Either wait until he dives before slice him with your knife/ax, or wait until he tries his puke attack and hit him from behind. This may take a while, but you should not lose a life when fighting this Boss. There is a Health Glyph in the lower left corner. Do not kill the blue flying enemies, as they just respawn as soon as they die. Play at least with two players, with one being Martyr. First, destroy all the benches for easier movement. Have Martyr get the bear's attention then run around in a circle. You are faster than the bear and he will chase you, but will not be able to hit. While he is chasing you, have your partner unload on him. When he gets down to low health, he might try to puke on you. Just get his attention again and repeat. If you run fast enough, you might be able to chase him, and hit him from behind. As any character, you need to master using the Analog-stick and C-stick simultaneously to run backwards and fire your weapon at the same time. Run in circles around the room, picking up shotguns and machine guns. Picked up shotguns seem to do the most damage. Continue running backwards and firing the weapons you have picked up. Disregard the blue ghosts. As long as you are running, they cannot hit you. Using this technique, you can defeat the Teddy Bear without losing any lives or having to use the glyphs, relatively quickly.

Defeat The Enemy With Knives In His Hands

Load up your rocket launcher before you go in the electric chair room. Run to the middle of the room, avoiding him. Run around in circles with the Launcher pointed at the chair. Keep shooting it while you run in circles. Make your circles just big enough to avoid him and do not accidentally shoot him at point blank range or you will lose a life. Change your direction when he changes his. The chair should explode after awhile. You can then just shoot him at your leisure or slice him up a bit before regenerating your health. You should be able to kill him without losing a life.

If you are running or walking around and notice a Zombie or tree whip spawning (coming to life), get there fast enough and stand on top of the place that it is appearing from. The enemy will be frozen and unable to hurt you. Be careful, as many times you may get stuck with the enemy and be unable to fight. If this does happen, take out your melee weapon and hack away until you are free. Note: This does not work with small enemies (dogs, rats, alligators and skitters).

Use the following trick to kill enemies without taking damage. When in a level with fences, such as at the Prisons, stand behind one with your unlimited long-range weapon and fire through. If done correctly, you should be able to kill anything you see through the fence. You can also walk through a fence. Once on the other side, wait until zombies or other enemy appears, then and run back through the door. Fire at them until they are dead.

When you enter the room with the two sisters/innocents, defeat all the enemies but do not leave. Search the walls in that room and find the spot where the wall is cracked. Attack it with any weapon. It will eventually collapse. Inside are some special weapons (shotgun, etc.) and the permanent strength power-up.

In the catacombs, if you do not see the crack, slice at the wall that points north from the screen. It should give off white puffs when attacking the correct wall.

Make sure you can spend an hour or so killing this monster alone. It is better to have Defender or Martyr because they are faster. When you first appear, kill all the zombies that are near you. Explore the street, picking up the machine gun and killing zombies on the way. Follow the fence all the way up to the opening. Be careful as there are many zombies and a few gargoyles. Once you have killed most of the zombies, go into the school area. Stay away from the gate so you do not activate the Boss too early. Explore a little bit, killing all of the zombies, getting health, and picking up the machine gun in the little playground near the exit. After you are sure everyone is dead, follow the fence (on the inside) until the intermission is activated and you have to kill the Boss. There are two ways to kill him: running around the fence shooting him while he is stuck; or the complicated but more reliable way as follows. Once the Boss is following you, go into the school yard and up to the tree. Stay next to the fence and wait until he is near. Jump over any ground attacks and kill the skitters. Once he is near the tree, quickly run away and go on to the other side of the fence (you should be on the street). Shoot him with everything you have, minding the skitters. It will take awhile but you will not use any lives.

In the level with the path to the mansion (with the dogs and fountain), walk along the left side wall. You will find a small area behind some trees with some weapons and a permanent power- up. Watch out for the dogs in there.

When there are many enemies in your area, use the cleave ax special. Go in the middle of them, hold R, then release. This will take out many of the nearby enemies.

Martyr's "Retribution" Edge returns a certain amount of damage to any enemy that hits her (depending on its level). However, Martyr herself will take no damage while Retribution is active, even from Bosses or their abilities. Note: Retribution will drain health as well as conviction. Use this on annoying Bosses such as the Teddy Bear (no more vomiting deaths) and the Vampire Boss.

Choose Judge when playing the game in single player mode. Note: The flaming crossbow arrows visible in the FMV sequence are not actually in the game.

An easy way to avoid taking damage from zombies and other creatures is to stand on top of an object (for example, cars or trucks), staying away from the edges, and blasting away. If the object can explode, blow it up before you get on or it may explode while you are on top.

Activating the Demand Edge harms your hunter -- use it sparingly.

Defender's Healing Edge can heal all Hunters near her when it gets to level 2 and 3. Note: On level 2, hunters must come close to Defender. On level 3, Hunters can be a few steps away.

Successfully complete the game to unlock the "Nightmare Mode" option at the Special Features screen.

Successfully complete the game to unlock the "Alternate Hunter Mode" option at the Special Features screen.

Save at over 50 Innocents before returning to the train to unlock the good ending.

It is best to stay near Hadrian (the opponent with the talking arm). If you move in the room while fighting him, two of the first level Bosses (with many arms) and four of the enemies that hit you with their eyelashes (with 2 legs) will attack.

Use Judge. His crossbow kills them in one shot. Note: This refers to the white ladies that have machine guns and can move very fast, and not the Boss to the mansion.

On the levels after Arkady when the blue wolves chase you, do not waste any ammunition or conviction on them. Save it up for the werewolf, and use special weapons or conviction on him. You will need all the items you can get for the last Boss, especially if you do not have a lot of lives or are Martyr or Defender.

In most levels, there are many fences. If you do not have many lives, or just want to save the ones you have, simply shoot the zombies through the fence. When your are done, go in the fenced area and wait for more zombies to appear. When they do, exit the fenced area and continue shooting. Note: Avengers unlimited gun and the shotgun will shoot through, but the other hunters may not.

To defeat the Boss with Judge, use WordOfPower. When Judge's conviction disappears, go up close with the sword and slash. The Boss will kill you, but you will return with more conviction. Then, use WordOfPower and repeat. To defeat the Boss with Judge and Defender, use the same as with just Judge, but have Defender get all the special weapons on the level. While Judge does his attacks, have Defender stay back and shoot. When fighting the Mansion Boss, keep yourself directly behind him and kill him using any weapon. He cannot hurt you from that position unless he turns around and faces you. The key is to face his back. The easiest and fastest to kill the Mansion Boss is with a chainsaw. Get behind him as much as possible and use the chainsaw completely to kill him quickly.

We have no cheats or codes for Hunter: The Reckoning yet. If you have any unlockables please submit them.

We have no unlockables for Hunter: The Reckoning yet. If you have any unlockables please submit them.

We have no easter eggs for Hunter: The Reckoning yet. If you have any unlockables please submit them.

We have no glitches for Hunter: The Reckoning yet. If you have any unlockables please submit them.

We have no guides or FAQs for Hunter: The Reckoning yet. If you have any unlockables please submit them.

Submit a cheat for Hunter: The Reckoning