Use the above links or scroll down see all to the Xbox cheats we have available for Hunter: The Reckoning. 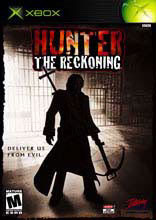 To defeat the final boss the Warden first, if you are low on lives save all the people in the top right cages by hitting them, by doing this you will make him split into three different ones, the real one is the one in the middle and the fake ones are on the top and bottom. Deafet the two fakes and dont bother going for the real one he will regain health no matter what. Go to the window that is covered with wood and start attacking it with anything you have. Once it is gone you will win.

Gates That Seperate The Living And The Dead

There are many gates in many levals and most of the time you can see the dead people on the other side well take out your gun with unlimmited ammunition move up to the gate and start shooting BUT make sure that when you shoot keep on walking into the gate as if you were trying to walk through it.

All you have to do to kill the bear is take out all the seats in the church so you can rome around freely. After that you pick up the shotguns and machine guns in the church. and start running backward and pumping the bear full of lead. When he is about to vomit on you run behind him and start chainsawing the heck out of him. If you dont have a chainsaw use your melee weapon. Judges conviction attack works very well on this boss if you get rid of the blue things.

After you kill all the zombies and get the boss out there are two places he can't get you at the first is you get in the dumpster against the wall out side of the gates and jump and shoot when he does his spiders and earth quake. The other is hide behind the swingset in the playground and kill the spiders before they get to you. to do the most damage to him shoot him while he is swinging his arms or making the earth quake.

Never able to pull the trigger fast enough? Then in the game as Martyr do her side flip. To do this, look with the right directional button and go at a 90 degree angle the other way. she should start to skip. Jump while doing this and in midair press the r trigger button. You should fire off 2 shots. It looks pretty cool and you can do it with a big gun like the shotgun.

On the level Hospital Roof with all of the vampires, dont talk to the person standing on a blue glyph. If you do 3 vampires will appear and you will have to fight them of course.

Save at least fifty innocents in the game by the end the train level so the innocents can leave to view the good ending.

To defeat the Boss with Judge, use WordOfPower. When Judge's conviction disappears, go up close with the sword and slash. The Boss will kill you, but you will return with more conviction. Then, use WordOfPower and repeat. To defeat the Boss with Judge and Defender, use the same as with just Judge, but have Defender get all the special weapons on the level. While Judge does his attacks, have Defender stay back and shoot. When fighting the Mansion Boss, keep yourself directly behind him and kill him using any weapon.He cannot hurt you from that position unless he turns around and faces you. The key is to face his back. The easiest and fastest to kill the Mansion Boss is with a chainsaw. Get behind him as much as possible and use the chainsaw completely to kill him quickly.

Defeating the Carpenter is actually pretty easy if you have a rocket launcher to destroy the Chair (it takes about 8 or 9 shots with it.) After you destroy the chair go after the carpenter with a chain saw. Once you run out of gas with that use the flame thrower. If you run out with that then start shooting him with whatever gun you have with infinite ammo. I didnt think this would work but i tried it and it killed him pretty quickly. When you are shooting at him run around in a circle so he cant hit you. It Doesnt matter what character you do this with but it works better with a fast character like the maryter or defender i did it with the defender and it worked pretty well.

Beat the game once and then activate "Alternate Hunter" mode. All characters will now have on different costumes.

To unlock the harder "Nightmare" difficulty mode, beat the game once with any character.

When you are trying to beat carpenter, use martyr and make sure you have a flame thrower and rocket launcher. As soon as you get to him, use the rocket launcher to blow up the electric chair (about 6-7 direct hits) then switch to the flame thrower. Run like heck and spray him with the flame thrower when he stops to try and cut you. Takes a little while but i found this technique to be the most effective.

During game play press Down, Down, B, Y, Down, Down.

While playing a game, press B, Up, Left, Down, Right, B(2) to get the best version of each weapon. Note: The directions are done on the D-pad. This code can only be enabled one time.

To get a flame thrower, rocket launcher, chainsaw (no gas though), assault rifle, and riot shotgun enter (B up left down right B B) this code works best with two or more ppl because to enter it again u must use all your ammo up.

We have no unlockables for Hunter: The Reckoning yet. If you have any unlockables please submit them.

We have no easter eggs for Hunter: The Reckoning yet. If you have any unlockables please submit them.

We have no glitches for Hunter: The Reckoning yet. If you have any unlockables please submit them.

Submit a cheat for Hunter: The Reckoning