Get the latest Indiana Jones and the Emperor's Tomb cheats, codes, unlockables, hints, Easter eggs, glitches, tips, tricks, hacks, downloads, hints, guides, FAQs, walkthroughs, and more for Xbox (Xbox). CheatCodes.com has all you need to win every game you play!

Use the above links or scroll down see all to the Xbox cheats we have available for Indiana Jones and the Emperor's Tomb. 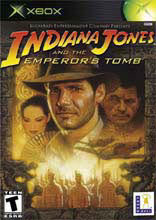 Acquire two grenades and you will find out that this is all you can normally hold in your pack. However, if you jump into water while holding a third grenade, you will put it in your pack. Repeat this as often as desired for unlimited grenade capacity.

If the objectives page has a picture of an artifact, than you need to find it on that level, if it is a letter, newspaper clipping or drawing, there is no artifact to find.

In Celyon, 2nd level (hunters camp) when you drop the box off the ledge that is tied by rope, there is an artifact in there.

On the first level go to the water fall and go behind it and you will find the first artifact of the game.

How To Unlock Art Gallery

Get all the artifacts in the game

When in the tunnel to light the remaining 7th and 8th torches of the puzzle, you will need to have your blue torch out so that you can see the barely there red carpet that you have to walk on. After lighting the torches, the carpet will break into moving ledges. Jump onto these VERY slowly. When back across safely, match up the 3 rings with the picture on the outside of the puzzle to complete it.

When lighting lighting the 5th and 6th lanterns, you will have to walk over a bridge that is lit up in blue. You can only see this with the blue torch in your hand. After you light the lanterns, some of the tiles in the bridge will turn red. Jump over the red ones as you can only safely stand on the blue. When you get towards the end and there are 2 red ones together, turn around and walk/jump back to the now blue one behind you. Keep going back and forth until you see that the last 2 tiles on the bridge are both blue. This opens the exit door at the end.

Path Of The Unseen

If you miss Indy giving you the hint, you cannot see the walls, spikes, or ledges without holding the mirror in your hand. When you are walking along the ledges you can only see so far ahead. You have to swing on a rope, but cannot see where you will land. There is in fact a ledge straight ahead even though you cannot see it, so go ahead and jump. The stairs exiting the area are on the left.

When using the stationary guns to shoot down the planes, fire continuously till at them until they blow up. You will not run out of ammo, so shoot them before they can shoot you!

Outside Castle At Prague

When trying to complete the first piece of the clock puzzle when you are in the courtyard of th castle, you need to be on the roof of the barn/stall. At the edge of the barn there is a narrow ledge that you need to walk around that will take you to another ledge. There is a locked door on the right of this ledge. Proceed up the stairs to another locked door. Hop up on the ledge and walk into the wall on the left. There is a trellis to climb up. There is also a pulley up in the towers, but do not use it until after you pick up the broken sword from inside the armory.

Sun: 10, Moon: 10 Scales at the top. Beat the boss. Throw acid at it, (4 times). You cannot fight it. After it's hit for the fourth time, it will destroy the acid machine. Grab the metal pole with acid on it and beat it to death. Use a medikit if your health gets low.

This is actually easier than it appears. At the beginning, swim to the left and pull yourself up onto dry land. Grab the super speargun, spears, oxygen tank and load up with two demo charges. Check the immediate area for jellyfish and if there aren't any (or many) jump in, face the Kraken and press L trigger to go into first person mode. Shoot the Kraken in the eyes. Once it retreats, quickly swim over to the pillars (either on the left or right) and press the Y button once the demo charge icon appears Set a demo charge and quickly scoot over to the pillar closest to it and try to set another - and then swim away fast. The pillars will be damaged by the explosion. Simply repeat this process to take out the other two pillars and you will kill the Kraken.

In case you don't have the excellent manual, Indy can whip yank enemies towards him and whip yank their weapons out of their hands. With the whip selected, press and hold A when attacking.

In The Dungeon With Rats (Prague)

There is a ledge in the middle of the room that has a couple of switches on it. You can only run and jump towards this ledge to grab it. For some reason you can't stand in front of it and jump to grab the ledge. Pull the ledge, look for ropes and make your way to the back of the room (the opposite side from the water). Once you pull the switch, make your way back to the ledge and pull the switches so that you can access the ropes that are facing towards the water area. It may take a few well placed jumps to reach the first rope (make sure Indy isn't holding anything!) and then swing to the next rope and then up to the ledge.

When you come to an area that has a cage with a hook dangling from it, select the whip, go near the edge of the ledge, jump straight up (not forwards) and use the whip at the height of your jump to grab the hook.

Getting Into The Castle

Use the remote charge on the circular well in the courtyard. Drop down and swim to a ledge.

Don't go the easy way into the castle. After you climb down the chain, go around the steps and look for a L shaped pipe that you can jump and and grab onto, and then shimmy along.

Use the map (which is actually helpful for once). Swim around everywhere and when you reach the right place, a cutscene will take over.

Put the astrological scales symbol at the top and then put both hands at 10:00

Jump Across The Bridge

Small, gentle hops do the trick. Don't run at it. Halfway across you will fall in anyway.

Wait until the croc is on the far right of the room and have Indy swim towards the door to his left. Once you get through the gate, climb up the ledge to your immediate left. Hopefully, the croc is close-by. Have indy turn left and jump over the bridge. There is a lever to your right and a bunch of skulls to your left. Grab a skull and try and get the croc to swim under the gate where you are. Once he's in there, pull the lever and walla! The croc is captured. Jump back across the bridge and go up the stairs and begin find the lever... this lowers a bunch of cages which lead to some chains and *WOW* another lever! Do it again until you get to the last lever which opens the rock up.

At the start game screen after you chose your level hold L+R press Up, Up, Down, Up, A, X, A, B, Up, Down, Y and Start. Note: Your gun must be loaded, and weapons like grenades are not infinite.

At the main menu screen (start game, load game etc.) Hold L + R and press Up(2), Down, Up, A, X, A, B, Up, Down, Y and Start (keep holding L+R down while pressing Start also). Note: Use the D-pad. If you entered the code successfully you will hear musical notes. Please note that if Indy falls to his death the game will have to be restarted.

We have no unlockables for Indiana Jones and the Emperor's Tomb yet. If you have any unlockables please submit them.

We have no easter eggs for Indiana Jones and the Emperor's Tomb yet. If you have any unlockables please submit them.

We have no glitches for Indiana Jones and the Emperor's Tomb yet. If you have any unlockables please submit them.

Submit a cheat for Indiana Jones and the Emperor's Tomb