Get the latest InuYasha: Secret Of the Cursed Mask cheats, codes, unlockables, hints, Easter eggs, glitches, tips, tricks, hacks, downloads, hints, guides, FAQs, walkthroughs, and more for PlayStation 2 (PS2). CheatCodes.com has all you need to win every game you play!

Use the above links or scroll down see all to the PlayStation 2 cheats we have available for InuYasha: Secret Of the Cursed Mask. 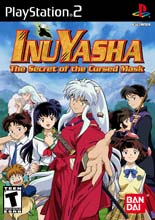 When Utsugi try's to take your soul, Naraku comes back and has absorbed Utsugi. After he has absorbed Utsugi he get's all of Utsugi's powers. Make sure that you are stocked up on tons of healing item's. Use your strongest charecters and their strongest attacks on Naraku. Use your weaker characters to use the healing items on the others so they don't die. When you use Miroku's Sprital Vision on Naraku, it says that Naraku has? Health. In the final battle against him, he has 10, 000 life point's.

When she says "You can have it back." Do not attack her the damage will come back to you. If she says "Listen to my voice" or "Give me your soul" attack her.

There are some co-op attacks with Miroku that use the Wind Tunnel. They do not work on the Boss characters. The co-ops are Miroku with Kagome the second co-op, Inuyasha the second co- op, Sango second, Kaname the third, and Michiru the third co-op. Miroku and Shippo's second co- op attack everybody. The main character and the person whose relationship is strongest with them, the strongest attack co-op is the third one. For example, if Kaname's relationship was strongest with Inuyasha's, then their third co- op attack will be the strongest, no matter if it is two girls or two boys or a girl and a boy.

On Asagiri Island, after you get blown up by the Flame Demon, you will be on the beach with the person who you have the strongest relationship with. After you see Kagura and utsugi, go to the beach where they came from. There will be two items there. One is the Shikigami Disk, which raises your attack and defesne +20.

Do not flee from battle unless absolutely necessary. If you are fleeing from battle more than you are actually fighting, your game may eventually freeze, or it will flash the leading character and tag along character repeatedly on a black screen, frozen in the last position they were in before they were attacked. You may also loose all visuals. You will still hear you characters movements and/or actions, but will not see anything but a black screen. If you intend to flee often, make sure to save your progress frequently. The only way to exit this is to restart the PS2.

Naraku will take form of a spider when you first see him in the cave where you meet Kohaku and the two flying bat demons. Kagura will help you for one demon to become free she says when the door opens. Naraku will send a Miasma and you cannot get through it. However, Kagura will use "Dance Of Blade" and defeat the puppet. Then, Naraku will take Kagome's Shard and absorb it into his spider body and change form. The key to winning is to use Inuyasha's "Wind Scar", and whoever your character's Shikigami Powers and Sango becasuse they are the strongest.

When you get interval scenes, sometimes it will say, "Would you like to spend the night?". Respond "No" and you will not get an interval scene. If you say "No" to all of the optional interval scenes you should only spend one scene with each of the five main characters. When you switch places with Utsugi and you go to Naraku's castle, the game gives you the option to find the others or tell Sesshomaru about Rin. Choose "Tell Sesshomaru about Rin". Then, do all of the random events with Sesshomaru. Random events are when question marks appear on the map screen (instead of exclamation points). The first is in "The Field of Ignorance", the second time around go to "Road to Kasasagi", and the last time go to "Forest to Tsuzumi". In all of these places, if you wander around, you should find Sesshomaru and trigger an event scene. After you do all of this, Sesshomaru's picture should appear when you save your game. At the end of the game you will get the Sesshomaru ending. Note: You may have to do this twice. The first time to unlock or enable it and the second time to actually get it.

Successfully complete the game and save it when prompted. Start another game and get to the point where you are at Kaede's village. When you find the cat there, you will be given your character's stats from the completed game.

When you first arrive in Rindoh Village, you will get a day off. Pick Kagome. She then tells the main character (boy) not to peek, and then he gets stressed.

Kagome Takes A Bath With Kaname

Go to Rindoh Village after you get the Magatama Fruit. You will the next day off. Choose Kagome to hang out, then they talk about taking a bath. You will see a shot of Kagome in a cold lake.

We have no cheats or codes for InuYasha: Secret Of the Cursed Mask yet. If you have any unlockables please submit them.

We have no unlockables for InuYasha: Secret Of the Cursed Mask yet. If you have any unlockables please submit them.

We have no easter eggs for InuYasha: Secret Of the Cursed Mask yet. If you have any unlockables please submit them.

We have no glitches for InuYasha: Secret Of the Cursed Mask yet. If you have any unlockables please submit them.

Some of the Attack Names and Glitches: Good and Bad

Submit a cheat for InuYasha: Secret Of the Cursed Mask