Use the above links or scroll down see all to the Game Boy Advance cheats we have available for Jackie Chan Adventures. 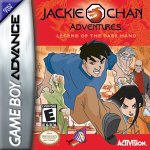 Stay as far right in the beginning and face left while blocking. Time a Roll left once the Moon Demon throws an Eclipse. If you do it too late, the Eclipse will cause major damage. Note: Block only when the Shadowkahn are still there. Once the cloud covers the moon, quickly Roll towards it and attack as fast as you can using the Mao Scroll Attack (preferred) or Xu Scroll Attack.

Know your distance when doing a Roll. While Hak Foo is walking towards you, Roll towards him quickly. You must land about where Hak Foo is standing. Roll forward again so he does not hit you. Next, Backflip the same way as a Roll twice. You should hit him sometimes if you continue this pattern.

This is an easy battle, and uses the same tactics as the first Hak Foo. If you get cornered along the southeastern wall facing right, use the Shen Scroll Attack (B + R + Up) to leap behind Hak Foo and quickly attack before he guards. Then, Roll away.

Stand directly in front of him. When you stand still, in two to three seconds Shou Foong will inhale. Time a Roll immediately when it is about to inhale. You should end up about behind Shou Foong. Once it finishes blowing, attack its back with a Mao Scroll Attack (Up + A), which you should have gotten. Continue this pattern.

Just like Hak Foo, time your Roll to end up at Valmont. Do it twice in a row, then attempt a Flying Kick attack (R + B) at Valmont. Then Roll away and repeat.

Press the L and R button when you get near a enemy. You can't lift up bosses.

How To Beat The Last Boss

We have no unlockables for Jackie Chan Adventures yet. If you have any unlockables please submit them.

We have no easter eggs for Jackie Chan Adventures yet. If you have any unlockables please submit them.

We have no glitches for Jackie Chan Adventures yet. If you have any unlockables please submit them.

We have no guides or FAQs for Jackie Chan Adventures yet. If you have any unlockables please submit them.