Use the above links or scroll down see all to the Xbox 360 cheats we have available for Kameo: Elements of Power. 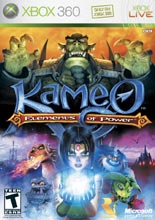 At the very beginning of the Dungeon of Eternal Life, there is a Troll in the cell. You can get him out of there. Unfortunately, this does not work with the elemental Trolls. Get Deep Blue out there, and spray the Troll with water. This will get the Troll up. You can then become a puddle thing and use the whirlpool to bring him closer. If you get too close to the bars, the whirlpool will suck him up and he will die before you can have your fun. When he is close enough to the bars so that you can grab him, do so and he will be free. However, he will still just stand there, glitched. You can torture and play around with the troll, but you cannot take him outside with you. If you kill him, just go back outside then return to see a fresh Troll to destroy.

Get an "A" rank on all levels to unlock the original Kameo costume.

In he badlands near the rocky falls place in the chunk of land beside there should be two huts the one on the right has snares costume n the closet.

One I crystal is under a clam near the shop in enchanted kingdom they all are in enchanted kingdom pummel weeds uprooter to flip the clam another in the chamber living portraits use thermites moratr on the statue one in the ancient tower use chilla to climb it its in a glowing shield the last one is in the dungeon use ash to light the torches an you'll have them all in no time.

On your way to the ice area, you should find two little huts (one where you find the warrior trainer and play mini games). Keep going right and you should find another hut. Look in the closet and you will find 40 Below's alternate skin.

After completion of the main Boss in the Forgotten Forest and receiving the element "Ash", go to the area where you can buy items for your character. Start smashing the pumpkins there. Each time you destroy a pumpkin you will get some copper or silver. You can keep smashing the pumpkins until you have the desired amount of money. This is a great way to get the best money bag and character skins early in the game.

Go into Creeper's hut (the one that had the rock stuck in the entrance). There is a record player on your left as you enter the door. Walk up to it and press A to use it. It will play an electric guitar version of the original Banjo Kazooie opening music.

Take care of the Trolls on the platform when you first start using Ash when the Trolls stop. Then, take care of the three airships using Chilla and Eye Of Strength. Go through the tube. Take care off the Roll Trolls and Rutter. Switch back to Ash, killing the rest of the Trolls in the room. The next room is where you accumulate points. In this room, get the Armor Trolls close to one corner then run up to the airship and take it out using Thermite and Eye Of Strength. Switch to 40 Below and revive your health if needed using the Mystic Eyes. Use 40 Below's Earthquake technique to put yourself in warrior mode. Switch to Ash and kill the bonus Trolls that appear. Repeat this until no more bonus Trolls appear. Continue 40 Below's Earthquake technique, but now switch to Snare and eat the Armor Trolls until there are no more. By now you should have enough points for "A" rank. Then, take out the Rutter. Use the Mystic Eye and replenish your health if needed. Move on to the next room.Repeat the same technique with 40 Below and Snare. Take out the Rutter and move on. Before dropping down the hole, take care of your health then switch to the Eye Of Strength. Take out the two airships using Chilla. Watch your health and use the Mystic if needed, or you can just skip the two airships if you already have enough points. Use Snare for Armor Trolls, Ash for regular Trolls, and Thermite and/or Chilla for airships.

Take out 40 Below and use his Wrecking Ball technique on Thorn the entire time. Do not worry about any of the enemy trolls that Kalus throws around you. Just keep on Thorn with the wrecking ball and go in circles around him so that he and the other monsters cannot get any good shots in at you. When you have Thorn dead, Kalus will appear and try to revive him. As before, do not worry about all the other monsters. Just transform into Chilla and use his Ice Spears to take her out. Note: You may need to do this two or more times if she revives Thorn.

The Rubble skin can be found in the forest. Again, find the shop and buy it.

The Pummel Weed skin is in the Enchanted Kingdom shop.

The skin for Major Ruin is in the water place shop.

The Flex skin can be found at the Ice place. Venture around until you find the shop that you do not have to walk into. It costs a bit, so you might want to have a full wallet.

Deep Blue's skin can only be found after you get Termite. Go to mountain falls and enter the treasure cave. After you free the boyfriend, destroy all the boxes. In one part you can use Pummel Weeds Creeper to get through a crevice. There is a chest. Ignore it for now and go underwater with Deep Blue. Go into the small cave opening. Follow it until you get to land and there will be a chest, a note, and Deep Blue's alternate costume.

Venture to the Ancient Tower. If you do not know where that is, find a long stairway in the Enchanted Kingdom that leads up to the throne room. Go left to find a passage leading to the Ancient Tower. There is a squid person there who needs you to round up her children. Equip Major Ruin, Chilla, and Ash to do the tasks. You will find a ramp that Major Ruin can go up. Then, use Chilla. You must repeat this process every level along the way. On every level is a squid child. They will be frozen in a block of ice. Use Ash to melt the ice and the kids will go to their mother. Continue up the ice until you reach the top. The little bug things will make it difficult all the way up, but it is possible if you keep trying. Once you get to the top, you will find the last squid child and be rewarded with three elemental fruits, as well as the new Chilla skin. Get the skin, then work your way to the bottom. When you get there, collect your fruit.

There is a way to heal yourself without finding hearts or potions. If you use the Dragon Elemental Warrior, Ash, a lot, you will notice that if you run on top of a camp fire in the Forgotten Forest Glade, fire heals Ash since he is a fire element. So, first you must unlock Ash's Fire Ring move (a powerful attack where Ash sets a ring of fire on the ground and can make it turn into a fire tornado on command). Then, instead of detonating the fire ring from a distance, stand in the middle of the ring and detonate it. By doing this, you can heal yourself and fight off enemies at the same time. This only works if you are Ash in the fire ring. Fire hurts any other elemental warrior.

How To Beat Thorn's Guards

At the beginning of the level, Thorn's Pass, when you walk over the bridge, you will find a giant armor troll. Before you approach, be sure to have Pummel Weed, 40 Below, and Chilla ready. As you come closer, 2 smaller armor trolls. The only way to beat them is to knock them off the edge but just ignore them becuase they will just keep coming back. Now, as you remember from the beginning of the game, the only way to beat a armor troll is to use Pummel Weeds uppercut move and then strike it with Chilla's ice spear on the neck. But, this troll does not stay vulnerable for more than 2 seconds. So, use 40 Below's move where he spins around with the giant snowball on the smaller trolls to get into Hero's Phocus Mode (Slow Motion Mode) so you will have more time, then attack the larger troll. Do this about 5 or 6 more times. There is another giant armor troll towards the end of the level.

Once you have freed Thermite from the Shadow Monster go into the Forgotten Forest Glade and approach the house with a giant stone blocking the doorway. Use Thermites mortar technique to destroy the boulder. Enter the house and open the wardrobe and you will find the alternate skin.

Enter the Dungeon of Eternal Life which is located in the center of the Enchanted Kingdom. If you venture through the dungeon you will find many doors. On each side of 2 doors there are dragon heads, Light them with Ash's Wildfire attack adn the doors open. In one room you will find the Eye of Spirit. The son of the Dungeon master is stuck in the far reaches of this dungeon. Release him by lighting the Dragon torches. Walk into the part where he came out of and a skin for Ash is available.

We have no cheats or codes for Kameo: Elements of Power yet. If you have any unlockables please submit them.

We have no easter eggs for Kameo: Elements of Power yet. If you have any unlockables please submit them.

We have no glitches for Kameo: Elements of Power yet. If you have any unlockables please submit them.

Submit a cheat for Kameo: Elements of Power