Use the above links or scroll down see all to the PlayStation 2 cheats we have available for Kingdom Hearts: Re-Chain of Memories. 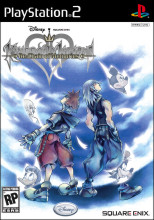 One attack card can inflict twice as much damage. Beat Riku Mode, and find in Twilight Town Key to Rewards.

How To Defeat Marluxia

In the first fight, Marluxia is very slow in movement and would rarely break your cards. The best techniques to use against him is blitz, and sonic blade. Be aware when he performs a move, the moment he does you must break his cards with 0,8,9 cards. Once you beat him in the first battle he will be waiting behind a big white door. I recommend that you would fight him if you are lvl 60 or up. When you fight for the second time he will be on a giant creature with sharp blades. The first thing you do is break those blades so you can attack him easily, once you break his blade, attack him normally by only pressing the X button because his creature is on air and most of Sora's moves don't attack on midair, beware of his techniques because if its successful there is a big chance you won't come out alive. I recommend that when ever he makes a move just choose the 3 strongest cards you have and press triangle 4 times . Once you beat him for the second time you will challenge him the third time and this time he is stronger then before ,so just attack the way would usually do but there is a time when he will hit you and all your cards will scatter when that happens collect all your cards as fast as you can before they disappear,and there will be also a time that he will trap you and the only way to get out of it is breaking his cards individually (by single cards by using X button only) apparently he will scatter your cards, and trap you more then once so when you have the opportunity to attack him, every chance is precious because for every time you have a chance to hit him you will be able to take out approximately 1 and a half bars of his health and eventually you will beat him.

When the white mushroom heartless starts shivering, shoot it with a fire magic card. When it leans back, begging, shoot it with an ice magic card. If it is slumped over, not doing anything, or thinking, DO NOT DO ANYTHING TO THEM. Do not use keyblades, summon cards, or friend cards. You may use items, but only that affect you. BE CAREFUL when targeting them. There is a lot of experience from each one, and the first one you get to leave will give you a premium bonus.

How To Beat Vexan In Twilight Town

After you beat Vexan the first time he will give you a world card and you will have to use it on the big door. I know in the first game he never visited Twilight Town, but all will be revealed in Kingdom Hearts 2. You need to have at least 12 to 15 Fire spells, 3 cloud cards (you can get them in the moogle shop), and at least 2 elixirs. Then go into the Key of Beginnings door and you will have to fight him again. before you do, put in all fire spells you have and the elixirs to then take out all of the ice spells (don't get rid of them, you will need them later). Just keep using fireaga and, once you run out of them, use an elixir and do it again until you run out of elixirs then stock the three cloud cards to use omnislash. Hit triangle when it flashes on-screen to add an attack. By then he should be dead but if he's not just keep using strong attack cards and he should die.[Look out for his new attack he says "Come to me Ice Blade!" to dodge it you need to do 2 dodge rolls and then jump on the last attack (may not work on the last attack).

Whether you're playing as Sora or Riku the battles on the Castle Oblivion Floor can be pretty tough. Well there's a solution. The Martial Awakening Card powers up all of your attack cards. So if you want to have easier battles open doors using that card. It 'll make the battles even more easier if you have attack cards ranging from 6-8. 9 cards stay as they are. Battles will be much easier if you use this technique.

After hitting the vines with the purple flowers and entering the door, there will be some glowing flowers to your right. Hit them and the Lady Luck key blade will be dropped

In the same area as the glowing flowers there is a pink gift box, hit it and you will get a prize.

How To Dodge Vexen's Freeze Attack!

As you fight him, he will use a move called freeze, which is almost impossible to dodge. To dodge it, you must wait until he says "freeze." The moment he does, press the square button to roll so you can avoid taking a lot of damage.

How To Beat Larxene's Thunder Bolt!

Whenever she yells "Lighting" dodge roll until the she stops. And be careful when she jumps and yells "your done" or "huh" she will do a Mega Volt - to avoid it you need to stand right under her and right before she does it you do a dodge roll, so do this over and over and you'll beat her.

How To Beat Oogie Boogie

When he throws purple dice use a card that is higher than his and the dice will be red and one of the gates will close. Keep doing this until all the gates are down and jump up and attack.

How To Learn Super Glide With Sora

In the last level of sora mode which is castle oblivion go to the door that needs key to rewards which is the golden card and once you open it you will find a treasure chest containing the ability to let sora glide faster and better.

How To Beat The Trickmaster (Wonderland) In Riku Mode!

When you first fight the trick master you will have only little amount of cards and plus there all weak (0-5) to beat him you need to dodge his attacks and wait for the right time to use duel, once you are in dueling mode you most break all his cards and when it becomes successful he will take a lot of damage, after that you just do it over and over again.

How To Beat Jafar In Agrahbah

When you start to fight Jafar he will be in his genie form and make lava pour from the walls. Then when he starts lock on the parrot and keep hitting the lamp that's with the parrot. Don't try to attack Jafar because he will just block you from hitting him.

When you get to Wonder Land the doors will have vines on them. You don't hit them, you destroy the purple flowers.

We have no cheats or codes for Kingdom Hearts: Re-Chain of Memories yet. If you have any unlockables please submit them.

I found all the organiztion XIII cards, to find them you have to beat riku's story, and open a chest in traverse town, (getting hidden dragon) the cards are listed below (you need the golden treasure card for some of them): (as sora)

To unlock Instant Reload, you need to beat Sora's Story and the "Reverse/Rebirth" story will be unlocked. Press New Game and Select "Riku"from the menu that comes up. when your playing as Riku, your Reload card is black. When you Reload your cards ,they will Reload instantly.

Beat Guard Armor, go up a few floors, come back to Traverse Town, open a Calm Bounty Room, and the card should be in there, If not, reopen more Calm Bountys.

After beating Riku mode, find in chest in Twilight Town.

Guards the second hit of a combo attack. Beat Riku Mode and find in Wonderland Key to Rewards.

Aero remains in effect for a short period. After beating Riku Mode, find in Monstro Key to Rewards.

Use cards, even when being hit. Get this by defeating Axel on the Castle Oblivion Floor.

Chance to confuse enemies as you attack. In Sora Mode, beat Riku Mode, then find in chest in Destiny Islands. In Riku Mode, beat Zexion.

Obliterate enemies with the finishing blow of a combo with a high success rate. In Sora mode, find this by beating Riku Mode and finding it in a chest in Castle Oblivion level. In Riku Mode, beat Lexaeus.

Revives you when HP hits 0. Get when defeating Vexen in Twilight Town.

Use sleights twice in a row, when using them. To get card, beat Marluxia first form/Marluxia Replica.

Increase running speed. To get card, beat Larxene on the 12th Floor.(12 is Larxene's Organization number!)

Beat Sora's story mode to unlock Kingdom Hearts Reverse/Rebirth. In this mode you can play as Riku.

We have no easter eggs for Kingdom Hearts: Re-Chain of Memories yet. If you have any unlockables please submit them.

We have no glitches for Kingdom Hearts: Re-Chain of Memories yet. If you have any unlockables please submit them.

We have no guides or FAQs for Kingdom Hearts: Re-Chain of Memories yet. If you have any unlockables please submit them.

Submit a cheat for Kingdom Hearts: Re-Chain of Memories