Use the above links or scroll down see all to the PlayStation 2 cheats we have available for King's Field: The Ancient City. 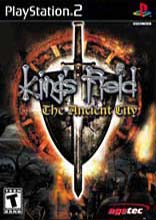 The "Scorpion Blade" is one powerful F*&%er, equip the spider amulet or the antidotes in your hotslot and nullify the poison status it inflicts on you.

There is a small cliff near the lighthouse in the Widda area, five mushrooms grow here every ten minutes...you have to shoot them down with arrows.

Do NOT Impulse Buy

Do NOT impulse buy! Only get herbs, shrooms, arrows, etc. Usually you'll find the weapons or armors (besides the crystal armor set)soon after you meet these shop keepers. However, do buy what you think are the rare items, magic crystals, vials, wands, etc.

When you reach fist level 3 you'll be able to use fist magic, and some weapons including darkwood club, windslasher, venom blade, etc. can use "fist" magic as well. It will throw a razor like slash.

Right after you fight the dark wizard, a door (Previously locked by the wizard's magic) will now be accessible. Past the demented puppets and a door ahead there will be a hallway off to the right, the first door on the left in this hall is the doorway to an empty room (That's what I thought...) Find the very small hole on the north wall and equip "Lord Myu's Amulet. You will see a green panel in the ceiling. Shoot a bolt or arrow into the hole and climb up the staircase that lowered. Earthquake awaits, a powerful 2 hand hammer that causes slowness.

After aquiring all magic crystals, make your way to the Ancient city's main tower...all the way at the top is a wall covered with tiny flames representing all the crystals you have gotten...open the doors that the flames burn on.

Talk to everyone, and keep going back to talk to them. They might have some information about certian areas and items. Don't kill anyone either, besides for Lee Maynor

Examine everything, walls, floors, dead people, barrels, etc. There are alot of items out there. Look everywhere you can, even ceilings!

Once you save the drawven blacksmith, Hamurah Forgefist, repair any and all equipment. Having armors and weapons in good shape will do very well in battle, making a better chance of survival in your battles.

There are about 10 other characters about the land of the ancient city, they don't do too much other then just say things to get you in the mood (of the game silly).

He's a traveling merchant who got lost. He's lying... He wouldn't be sitting in one place if he was. Buy the yellow wand off of him, earth stones, and the crystal vial.

He sits in a small room with Myu's necklace, he's afraid of the widdas, those snake men. Throw him down an egg and he'll give you a chance to trade with him. His currency is bones, scales and claws.

Tom Hanks got castawayed again... fill up a vial with poison where you first met Mista and give it to him to kill the fish men. He'll give you the fortune bracelet.

This lady sits by her(?) healing fountain, thinking about the right or wrong doing of the king. She owns the forest golem standing next to the huge door. Retreieve the forest dew from the caves in that area and feed the golem. Don't worry about him attacking you.

A plump soldier that was attacked by his own men after they were zombified by those bugs. He hid in a large room near exploding barrels for defence (my opinion) i guess he would blow them up. He'll give you a bow when you save him. This guy has arrows for sale, it wouldn't hurt to buy a few. At least 10.

An expedition soldier wanting to die... I say go ahead and do it. If you don't, after a while he'll become a zombie and you'll have to kill him anyways. You get a cresent moon key from him, opening up the huge spiders lair.

This rude dude you find in the mine near the decomposed man with the poison stool growing out of him (cool site!). This guy doesnt have much to say and thankfully he dies later on.

This old elf has some signs of Alzheimers Disease. He's a dreamer wanting for the laughter of the childen to be heard. He cares about the young folk. The item you can get from him is the release rock.

A master thief that really wants a rock of life, go ahead and deliver it and he gives you a crystal vial. The vial is a great item that will be essential to your quest. Fill them up with healing water. You'll find him later on trying to sell you items he gets.

Catchy tune this guy has. He sells your first wind crystal [wind cutter] and a few other things. Don't buy the mace or helmet bucause you'll find them SOON, this rule applies for most other shop owners.

A young girl who tries to play with her mopy dog. Her mother is sick and she really wants to help her. You can help her out by giving her mom the rock of life. Whack her dog to be mean. >:p Items you reiceive from her: Fire crystal #1 [fireball]

Mother to Lynn, she seems kinda anti-social giving you short answsers and such. Give her the rock of life, and don't forget to grab the shield by her bed.

A old man that wants the world to be rid of evil. Not much going on with him, besides the fact he.... you'll see... Items you get from this gentleman: Rusty key; which opens up his house.

You'll see this coward sitting in the small cave right in the beginning of the game. He's not much of a man, but he's got a few interesting things to say.

You'll find this in the elemental room in the Treasury. Push the element stones on the wall in this order: earth, water, fire, wind. This ring lets you in the "your not kingly" room.

Controls in King's Field are alittle awkward and slow, easy to learn but hard to master. Learn to strafe with the shoulder buttons, this makes it easier to get to the enemies back and attack. Also walking and strafing around corners make it easier to view whats around them, making you have the edge on an ambush, trap, etc.

Save all the time, there are alot of traps out there. Once you die anything found you will lose up to your last save.

DO NOT EQUIP THESE ARMOR PIECES!!! Their benefit is minor compared to most sets, the shield casts darkness on you the armor will slowly drain your health, the sacrificial mask will cast random spells in hopes to kill you, and the gloves will drain your health in exchange for power, the boots are the only things that don't hurt you but beware...when equipped the Death Walkers prevent you from running! After completing the snake-like widda location you will find a Widda Bow, the arrows are powerful and hard to find but should not be conserved...by the time you get the bow you are practically near the end of the game...use 'em up...

In the Flooded Castle there are always at least 2 water lizards in the main hall, strafe in close and avoid their ice balls, this is their only potent attack. When you close in enough they stop using magic and pull you in closer with their tongue like a frog, the instant you get in their biting range swing and stun them...then back up and repeat.

In the first town you come across, there is a well. As old fans of King's Field would know, most wells end up being fatal, so one generally does not jump down one. However, down this well is a peachy little secret area which leads you to a water crystal that would inhibit your quest to achieve all spell capabilities. This place is highly dangerous for beggining characters, however, so come back when you are a much higher level, and I suggest having the Water Talisman with you; you will be doing a lot of swimming.

Along the path of the game, you can find a specific genre of equipment, specifically with the pre-text of Ancient. Thusly the equipment goes as such--Ancient Helm, Ancient Plate(or armor), Ancient Greaves, Ancient Gauntlets, Ancient Shield, and Ancient Sword. Any of these pieces of equipment are just as useful as they are harmful by themselves, and wearing just a few of these will quickly make you overweight. However, if the entire genre of equipment is equipped, then the weight mysteriously decreases to about 43 pounds. Trust me in saying that by the time that you have the ability to find all of this equipment, it is definately among the best sets you have. Use it.

Quite like the previous King's Field games, some weapons you find along the way have specific special attacks. These attacks can be activated in the same manner that they could be in the previous games as well; by attacking with your weapon and just as it hits the peak of its arc, pressing the Spell button. This will allow certain weapons to spit out some sort of spell in front of it, hopefully damaging the enemy, but does take timing and a little practice, especially with the quicker weapons.

We have no cheats or codes for King's Field: The Ancient City yet. If you have any unlockables please submit them.

We have no unlockables for King's Field: The Ancient City yet. If you have any unlockables please submit them.

We have no easter eggs for King's Field: The Ancient City yet. If you have any unlockables please submit them.

We have no glitches for King's Field: The Ancient City yet. If you have any unlockables please submit them.

Submit a cheat for King's Field: The Ancient City