Use the above links or scroll down see all to the Game Boy Advance cheats we have available for Kirby: Nightmare in Dreamland. 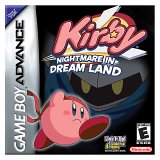 Some people say the Ball ability is useless and stupid. But some people who are smart enough press the start button and find some info about it. Like it says, change form and hold the A button. You will start to bounce faster. Using it on mini-bosses will be easier. It only takes about a few seconds to defeat enemies. But while bouncing you still can get hurt.

Simple Way To Beat Any Mini-Boss

To beat any mini-boss simply is by getting the Crash power up and using it on any boss. Then get one thing a boss shoots out to hit him and finish him off.

To unlock Extra mode, get 100% on normal. In Extra mode everything is the same except you only have 3 health units.

The trick to beating the second Nightmare is when he shows his tornado, the weak spot, instead af going to it and jumping to hit it, stand from a distance, jump, and press 'B'. A star will go flying, will hit him (if you have good aim), and will take away 1/6 of his life!

The first Nightmare is a big, purple and black ball. All of his attacks are easy to dodge exept the one where he takey four stars and launches tham at you. They either go strait or criss- cross! If you stay in the middle of the very left (right where the edge of the screen is), he cannot hit you with that attack no matter what! Remember to constantly use your star rod!

Mecha Mole is the boss on level 5 and seems really hard. If you go into the battle with Hammer, he's a breeze. Just keep hitting him with it and he'll soon be defeated! (Note that the Hammer also breaks the platfoms if you miss him.)

Kracko is the clous on level 4, and a lot of people think that you HAVE to use high jump, or you'll get hit before you start battling. Not true. Go into the battle with tornado, and use it to go to the top. You'll get there in half the time, and you'll beat him quite easily.

The Painter is the second boss and isn't too hard, but if you go into the battle with Hammer, you can beat him in 20 seconds. When he stops and starts to draw something on one of the paint boards, go right next to him and use the Hammer rapedidly until the drawing is complete, then dodge his attack. Repeat the steps until he is defeated!

King DeDeDe is the seventh boss, and can easily kill you if a few hits. However, if you get laser before you battle him, you can rapidly shoot him from a distance and easliy dodge all his attacks!

Mr. Sun and Mr. Moon are two bosses you have to battle at once, so it can be tricky. But, if you have either fire or ice, go to the one on the ground and keep hitting it. Each one should die in 5 seconds.

Meta-Knight is one of the hardest bosses in the game, but there is a trick so you can beat him without getting hit! (This is extremely helpful in Extra Mode.) When you go battle Meta-Knight, grab the sword and run to the far left, then hit Meta-Knight when he lands. Then, quickly fly to the top of the screen. Meta-Knight will become confused, and will do an attack. Then, after his attack, stop flying and hit him. Repeat the proccess until he is defeated!

Whispy Woods is the EASIEST boss in the game, but a REALLY easy way to beat him is to use either Spike or Freeze, go right next to him, and hold 'B'. The battle should be over in 5 seconds or less.

When trying to beat boss endurance there are powers in the attacks some of the bosses make. Here is some of them - Spark, wheel, mike, fire, cutter, hi-jump, sleep, hammer, and sword. There are no powers for woody and King Dedede.

Use cutter kirby and shoot boomerangs while jumping in the air and don't let the boomerangs come back to you or use fire kirby and flame him.

Here is an easy way to beat King DeDe. Go to level 7 and go to the first stage. Get the Laser power up and then leave the level. Go the Boss and kepp firing at him it will be a lot easier then with any other power ups.

If you inhale two enemies with special powers, both different, you get a random power*! *Note: this only works if you inhale Enemies not an enemie and a discarded power*

Sucking Up Enemies And Swallowing Them

We have no cheats or codes for Kirby: Nightmare in Dreamland yet. If you have any unlockables please submit them.

We have no unlockables for Kirby: Nightmare in Dreamland yet. If you have any unlockables please submit them.

We have no easter eggs for Kirby: Nightmare in Dreamland yet. If you have any unlockables please submit them.

We have no glitches for Kirby: Nightmare in Dreamland yet. If you have any unlockables please submit them.

Submit a cheat for Kirby: Nightmare in Dreamland