Use the above links or scroll down see all to the PlayStation 2 cheats we have available for Legacy of Kain: Soul Reaver 2. 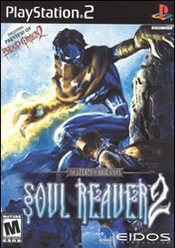 If you use the Soul Reaver to often it will become to powerful and will start to drain your health.

You should almost always defeat a Shades with a lunge and a sqare combo.

Once you get the DarkReaver a single Darkbolt should disable any Sentry Eye.

When you have all the Elemental Reavers, go to the castle where you began. Use the Fire Reaver on the floor. It has the sign of the Fire Reaver and is orange. Plunge the sword into it, then get the light. Use it on the door, then keep going until you get to a room where the Soul Reaver is located. Mobius will appear and insult Raziel. He will then take the Soul Reaver and be invincible. Note: You will suck blood instead of souls and also fight all Raziel's brothers and Raziel when he was human.

Close Up Of Raziel

Get to a wall, then move the camera in front of Raziel. Hold Circle to see a close-up view of his face.

After the intermission sequence when Raziel gets the Soul Reaver and he gets controlled by it, Mobius will close the door. Defeat everyone down where you had to turn to the different world, then go in the middle of the lock to go through.

If you notice your Soul Reaver gauge is getting high and want to save your health from it, switch to the Spectral Realm. It will deplete almost instantly.

Position yourself slightly to the left of any door that has a handle. Try to open it and it will, but you will not go through.

Get a weapon and get to a place where there is no roof, or to the lake. Aim the weapon at the sky and throw it. It will not come back down.

Get to a save point and take the Soul Reaver out. Save, then quit the game. Load the previously saved game and Raziel will not have the top part of the Soul Reaver. To make it fully formed again, press Circle(2).

On the ledge in the swamp just in front of the first forge (the dark forge) are some crows. Do not go near them. If you do, you can still get inside but you can never open the door again to get out. Getting out requires an intermission sequence with Voridor. Since the crows are his messengers, if they disappear the intermission sequence will not happen, thus, you cannot get out. You can go up to the crows if you wish. Here is how you can still get out. The crows have nothing to do with it. The actual glitch is that if you try to open the door to exit using the Dark Soul Reaver, it will seal with you inside. Before you open the door, shift to the Spectral Realm and back into the Material Realm so that you will have the normal Soul Reaver with no special elements. Return to the door and you can open and exit the ruins. The Dark Soul Reaver is what holds you from exiting. You must use the normal Soul Reaver to open the ruins door.

At the start screen, press Left, Triangle, Right, Triangle, Down, Circle, X. This will unlock all bonus menus.

Hold R1 + L2 + Square when facing an enemy and Raziel will kick them in the leg.

Pause the game hold R1 and press Down, Circle, Triangle, Up, Right, Circle.

We have no unlockables for Legacy of Kain: Soul Reaver 2 yet. If you have any unlockables please submit them.

We have no easter eggs for Legacy of Kain: Soul Reaver 2 yet. If you have any unlockables please submit them.

We have no glitches for Legacy of Kain: Soul Reaver 2 yet. If you have any unlockables please submit them.

Submit a cheat for Legacy of Kain: Soul Reaver 2