Use the above links or scroll down see all to the GameCube cheats we have available for LEGO Star Wars. 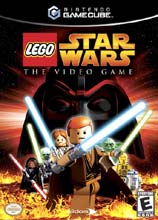 To do this get all 10 generaters and complete the ship you'll be rewarded with a lot of blue studs.

Go to the level where you fight against Darth Maul. Make sure you are in story mode. Right after you kill him the top of his body will fall off. When Obi-Won picks up Qui-Gon, look behind him. You will see Darth Maul's legs to be what looks like they are dancing or looking for the body.

Can You Spell LEGO?

In episode 4, yes that is the secret level, go to the room that has different color blocks and shapes. Use the force on the right ones at the right time and they will spell out the word LEGO. About 5 seconds later about 7 blue studs, worth 1k each, will drop. Total for that level the first time I played it, I counted over 100k studs. GOOD LUCK!!

To unlock episode 4 you must have the LEGO stud meter full untill it flashes on every level (1-1 through 3-6). In episode 4 you can unlock Darth Vader and Princess Leia.

If you are fighting battle droids turn into one and they won't shoot at you. They will probably follow you around like you are the leader. That way it is easy to shoot them without getting shot.

If you press X when you are the yellow battle droid he will pull out a walkie-talkie and say into it "Roger Roger"!

In the level Darth Vador (Episode III chapter 6) in the part where you have to put the place together to make it out, there are a lot of coins, the thing is if you die you keep the coins!

When you are jumping over the lava in the first part turn into Jango Fett ($65,000 dollars in Dexter's Diner) go in flying mode and you can fly through the part of the level.

In the game you can either find the guys as you continue playing story mode or enter the following codes then buy them at Dexter's Diner:

We have no unlockables for LEGO Star Wars yet. If you have any unlockables please submit them.

We have no easter eggs for LEGO Star Wars yet. If you have any unlockables please submit them.

We have no glitches for LEGO Star Wars yet. If you have any unlockables please submit them.

We have no guides or FAQs for LEGO Star Wars yet. If you have any unlockables please submit them.