Use the above links or scroll down see all to the GameCube cheats we have available for LEGO Star Wars II: The Original Trilogy. 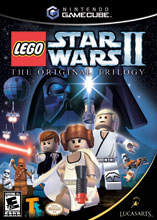 On Mos Eisley Spaceport (you must have self destruction unlocked to do this), Get to the car, change to a person who can drive it and then get in. get out bet don't move, change to R2D2 od C3PO and use self destruct. You should come back as R2D2 or C3PO driving the car.

In speader show down at the end thers an AT-AT if you and a nother player go in at the same time player 2 will fall to the ground and stay alive.

Go to a 2x money zone and keep killing yourself then you will get 8 thousand studs instead of 4 thousand.

At Mos Eisley canteena, select "enter code" and enter VAP664. You still need to select characters and purchase this character for 29,000 studs.

When you go through Chapter 5 in episode 5 try to get as much done as possible if you normally play alone. When you try to go through in free play the you can move the other character but it just sits there. Also, the second time you battle Vader, it will go up to the platform but thats it, it won't turn on the smoke things. (you can ignore this if you play 2-player alot).

Go to the double score zone and let the enemy kill you and pick up studs you drop. -coolkid32495

When you beat the game 100%,(Get all the gold bricks) go out to the outside of the cantina. Walk around until you find a pile of golden Lego pieces, build them up and a fountain of studs is the result, shooting out almost a seemingly endless amount of studs! now go buy the score X12 you Rich gamer :]

When you have 60 golden bricks, go over to the pile of them near the shaped wall. Build them up, and it'll be a door with what seams like a ? mark above it. Go in and you'll be in Lego city.

When you start out you have to defeat 2 stormies then use the Force to build half a bridge from the X-wing's wing. After you do that go behind the X-wing and press yourself against the back of it and you should get the Red Brick.

You know the gold bricks you get after beating levels? well they work out GREAT in the end. Once you get about 60 Gold Bricks there is a gold question mark shaped door outside the cantina. Go in there and you play lego city. A game where you have to see how fast you can get 1,000,000 studs. When you get all 99, THE BEST POSSIBLE THING HAPPENS! You build a golden pillar thing and it shoots out money! Thousands at a time! This is the easiest way to get money to buy things in the cantina.

First buy 'extra toggle' then turn it on, go to the second level in ep 4 doing free play mode and go to the place where you build a ship to go over the lake to fix the brige. Build the ship and turn into the skeleton in hop in with him and jump out. he should be standing up in one pose. Walk with him his leggs don't move! My sister and I do that skeleton thing alot, oh and when you buy 'extra toggle' you can turn into a Womp rat and many more.

Go to codes and enter jaw499

We have no unlockables for LEGO Star Wars II: The Original Trilogy yet. If you have any unlockables please submit them.

We have no guides or FAQs for LEGO Star Wars II: The Original Trilogy yet. If you have any unlockables please submit them.