Use the above links or scroll down see all to the PlayStation 2 cheats we have available for LEGO Star Wars II: The Original Trilogy. 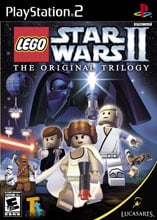 Get 60 Gold Bricks, then build the doorway outside

In jabba's palace go to the big hole (turn on extra toggle) jump in the hole as a regular character on a b'omarr monk and then switch to the wamprat and enjoy.

Gonk On A Spider

After completeing Jabba's Palace, play on freeplay as a gonk droid. Make the big hole in the floor, then get on the spider with a regular character and fall into the hole and before you die swich to the gonk droid. When you respawn you have a Gonk on a Spider. (For best effect use invincibility [to keep you from losing $$$]. ).

How To Make Clones

NOTE:You can only make up 3 or 4 clones at a time. You need to have completed Jabba's Palace level. You need to have a person on the dark side. First you need to kill all of the Gamorean Guards and shut their things that they come out of. Go to the room with the big hole in it. Switch to your sith and make the hole. Hop on a spider. Ride it into the hole and press triangle then jump and the spider should respawn and fall in again. All you see is you switch to the character you want to clone then press X. You have a clone.

How To Get A Droid To Drive A Vehicle

NOTE:You need to have the self destruct power brick. First get a character that can drive. Then press triangle then switch to the droid and press O. Now you have a droid that can drive. NOTE: You can get hit from enemies while you are a driod inside a vehicle.

How To Kill Jabba The Hut

To kill Jabba you have to unlock the room with Jabba's face above it. To do that you have to get all the bounty hunters. You also have to unlock SUPER EWOK CATAPULT. So once you've done that, you become a ewok and have SUPER EWOK CATAPULT on. When you see Jabba come press Square at him and the little ball will hit the counter and explode and Jabba will be gone and then he'll come back and you can do it again and again.

You will find it on the level Jabba's palace.

To get the power brick, just go to the level where you fight the emperor. On both sides are four red squares. Be Darth Vader and force them all as quickly as possible. Don't forget to hold down the force button until it stops!

To use self destruct, change or switch to a droid and press circle. You cannot be a jedi or any other blaster character.

After finishing the final episode level, Anakin's, Obi-Wan's, and Yoda's ghosts will appear in the character purchasing counter. They have hefty price tags, but they are worth every stud: they are invincible AND invisible to enimies. So start saving up for them...

To get easy cash just go outside and kill the barrels on the sides of the walls.

Press "Square, Square, X" on the controller to be able to jump extra high.

If you want all the characters from the first game available for free play in the second game, there are three easy steps to make that possible. First, make sure you have saved the first game on the same memory card that you have the second game saved on. Next, Go to the Cantina and go to extras. Then, buy the icon with Yoda's face on it. You will have to go to the paused menu and turn the second extra on. Now, go to any level and pick free play and you will have twice as many characters to choose from!

To unlock Lobot for purchase, go to the Mos Eisley Cantina, go to the counter, select "cheats" at the menu, and put in UUB319. Alternatively, complete the level "Betrayal Over Bespin", and purchase him in "characters" at the Cantina counter.

Use the cheat 'CL4U5H' and 'TYH319'. Construct a character with a red hat, red clothes, black belt, white cape (optional), black gloves (hands), a weapon of your choice, and Obi-Wan's head. Then, in the start menu, select extras, go down to 'disguise' and toggle through it until you reach the number 3. Go play as him in free play.

Pause during gameplay and press Up, Down, Left, Right, L1, R1, Down, Down.

Enter NYU989 to play as a snow trooper

Enter "PEJ821" as a code to unlock Tusken Raider for purchase in Free Play mode.

To unlock Lego Land, you must get all golden bricks in all the story modes. Then go outside and build the Lego Land building.