Use the above links or scroll down see all to the Xbox 360 cheats we have available for LEGO Star Wars II: The Original Trilogy. 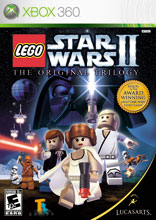 Go outside and destroy the barriers and money comes out.

How To Be Darth Maul From Episode1 The Phantom Menace

To Be Darth Maul from Episode1 The Phantom Menace you need to go to the tube in the cantina and pick this in the following order.

then you will be darth maul.

In Episode IV: Chapter 5 - Death Star Escape in Free Play mode, use 3CPO to unlock the first door. Then, use someone who has force powers to put together the fridge in the room. The fridge will open and a Super Red Power Block will pop out, allowing you to buy Invincibility in the cantina for 900,000 Studs.

This trick only works in Multiplayer mode and only stays effective for that level. When you leave a part of any level, your party will be with you no matter where they were before you left that part of the level. For example, if your friend or ally jumps off a cliff and you leave that part of the level as he dies, he will appear next to you with no hearts. He or she cannot be killed by anything except falling and/or stepping in the quicksand or deep mud from Degobah. This effect will end if you die from falling or switch characters. This can be repeated as many times as desired.

Admiral Ackbar: Go to the panel to the left and open the door with IG-88. Then, use your thermal detonators to blow up the wall of junk. Next, build the thing next to the chamber. Ackbar is inside.

While playing with a character that uses a lightsaber, press X to attack, but do not immediately press it again. Wait until the slash/attack stops, then quickly press X as soon as it stops. If done correctly, the next slash/attack will feature a "sparkle" effect on the lightsaber blade. Do the same thing for a special finishing attack. Additionally, immediately after the first or second slash/attack, press Jump for a special jump that puts you behind your target. Press X while in the air for a small area of effect attack.

Obi-Wan (Mission 2): Take 4-lom to the lift where the R2D2 control panel is located. Open it and go up the lift. Pull the levers after walking on the foot marks and enter the next room. Use the control panel again and go through to the last room. Obi-Wan is on the right. Smash through the boxes and he will be standing in the small doorway.

R2D2 (Mission 1): Enter the Bounty Hunter area. Keep going forward, then stop when you get to a wall. Enter both holes at the side of the wall. Legos will fly out. Build it into a doorway. Inside is R2D2.

While in a double score area with another human player, kill them and collect their Studs. Repeat this as much as desired to get an unlimited number of Studs. The amount of Studs lost will remain the same, while the amount of Studs gained from picking up your partner's will double.

In Episode IV: A New Hope - Death Star Escape, after you chase a Stormtrooper down the hallway, you will be bombarded with a large number of Stormtroopers. Use a bounty hunter to throw a Thermal Detonator. When it hits the ground, set it off. It should destroy a good majority of the Stormtroopers.

If you are vastly outnumbered with Stormtroopers shooting from left, right and center and you have R2-D2 in your party, use the following trick. First, make R2 your active character. Enemies will never shoot at a droid. Then, push the Stormtroopers closer to your friends and then zap them with R2's electric prod type weapon. They will promptly stop shooting and rub their sore spot. Quickly switch to a member which has a piece that can do damage (for example, Han Solo or Luke Skywalker). Shoot the Stormtrooper while he is nursing his laser burn. After he is killed, make R2 your active character and repeat the process until you have defeated them.

Go to the Jabba's Palace level. Reach the part where you get the power brick and become a Dark Jedi. Then, use the Force on the floor. Get on a spider and go down the hole. It may take a few attempts, but eventually you should become the spider. Change to any character and jump. You should have made a clone of the character you jumped with.

This trick requires R2-D2 and self destruct. When you must battle a Boss (for example, Darth Vader, Darth Sidious, etc.), change yourself and your second character to R2-D2. Walk right up to them and self destruct. It will take away a heart. Do this as many times as desired.

While playing as the Gamorrenean guard, hold B to see him use his axe as a guitar.

Defeating The Rancor At Jabba's Palace

Using Your Partner As A Decoy

When playing as a ghost if you have a live character the enemy will get attack them. And you kill the attackers. You have to do this to unlock the Jedi destiny untouchable achievement.

Enter the code: SMG219 and then you can purchase for 38k studs.

Enter BNC332 at Mos Eisley Cantina Bar. Then you can purchase for 19k studs.

Enter the "CL4U5H" and "TYH319" codes at the Mos Eisley cantina. Select the "Character Customizer" option, then choose a human head, the Santa hat, white beard, and red clothes. After choosing a red or green lightsaber, enter the "Extras" menu and activate "Disguise 3" for the glasses.

To get Santa Hat and Clothes, enter CL4U5H as a code.

At the cantina press WTY721.

At the cantina press UCK868.

At the cantina press VHY832.

Play As The Emperor

To play as a Tusken Raider, enter "PEJ821" as a password.

To play as a Sandtrooper, enter "YDV451" as a password.

Start the game, then go to the two test tubes in the corner. Customize the first or second tube, then use these specific parts in order: black hood, Luke's head without the hair, black Jedi body, black arms, black or white hands, black legs, black belt, black cape, and red or blue blade lightsaber.

Collect all Minikits to unlock Boba Fett's Slave 1 ship in the vehicle missions.

In Episode V: Chapter 5, use the Force on the X-Wing. Then, start walking around the X-Wing. You will get a Red Brick, allowing you to purchase the the Minikit Detector for 500,000 Studs.

Get 60 Gold Bricks, then build the doorway outside.

We have no guides or FAQs for LEGO Star Wars II: The Original Trilogy yet. If you have any unlockables please submit them.

We have no achievements or trophies for LEGO Star Wars II: The Original Trilogy yet. If you have any unlockables please submit them.