Use the above links or scroll down see all to the Nintendo DS cheats we have available for LEGO Star Wars: The Complete Saga. 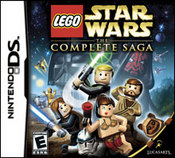 In movie #1, door 5 is the unbeatable level. You have to jump over a really big hole.

**** To do this you have to have self-destruct unlocked. ****
First become a character with a blaster then have C-3PO as your friend. Next go back to the character with the blaster and shoot C-3PO untill he becomes 1 legged C-3PO then become him and self-destruct. You will become invisible untill you die or swich characters.

First, you have to complete the level "Defense of Kashyyyk". Then you have to find the x10 stud multiplier red brick on the mission "Cloud City Trap". If you have the money, buy it (it is worth 5 million studs, but it's worth it). Then go back to "Defense of Kashyyyk", do freeplay, choose any character, then start. Once you get through the treetops and bridges and get down to land, when you see the small plants that can have the force used on them, do not use a Jedi, use a Sith. The plants should blow up and give you more studs than they would do with a Jedi. When you complete the mission, you should have 1 million studs! Please Note: you to collect every stud on the mission, which includes forcing and destroying objects.

Trap Door On Discovery On Kamino

WARNING: Must be a Jedi. Go to Episode II level Discovery on Kamino. Get to the part where Jango Fett is being shielded and 2 lasers are shooting you. After disabling the shield by destroing the lasers, Fett will have the blue "Force" field. Push and hold the Force button and run into where he led off. When you run into the room, you will "fall" (which is not seen) and die.

First make your friend 3-CPO. Then make the other person a blaster guy. Shoot 3-CPO intil he has 1 leg. Then become him you should have 4 hearts and should only one leg and no arm. (Will only work 3-CPO not TC-14).

First get Self-Destruct. Then during free play when your health is low, Turn into 3-CPO, R2-D2, R4-D4, TC-14. Then press Y. You explode and you won't lose any studs (money) and your health should go back to 4 Hearts. It will also kill any enemies near you.

All you have to do is get the "self-destruct" extra then while playing as R2D2 press and hold "B" and then press "Y" to self-destruct. The thruster sound will keep going until you press "B" again.

If you destroy all the chairs and cups in an episode room, leave the room, then go back in, you will be able to do it all over again and get more studs.

To do this, you need to be a Jedi. Pull your Lightsaber out and press Y. Before it goes in, press any direction on the +Control Pad and it will cancel out the Lightsaber being put away, but not the sound. This technique can be used to annoy people you don't want watching you and make them mind their own business.

To get the times 10 red brick go to Cloud City Trap and look around.

We have no unlockables for LEGO Star Wars: The Complete Saga yet. If you have any unlockables please submit them.

We have no easter eggs for LEGO Star Wars: The Complete Saga yet. If you have any unlockables please submit them.

We have no glitches for LEGO Star Wars: The Complete Saga yet. If you have any unlockables please submit them.

Submit a cheat for LEGO Star Wars: The Complete Saga