Use the above links or scroll down see all to the PlayStation 2 cheats we have available for Madden NFL 07. 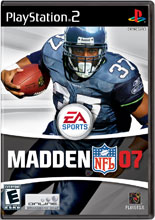 When you first start out on the NFL Superstar it would be easy for you to pick the best parents you can. For example if you are a QB make sure that your father has some NFL experience in the league. Like if he was a Hall Famer it would be easier.

Maximize Your Stats Before Each Game

This ONLY works if you have an agent with access to the performance institute. Normally, you can only do it once per game. I've found a way around that. First, go to the institute and do your preferred workout. Next, go to your schedule and choose that weeks game. After you press X,a screen showing your teams and your offence/defense coaches. Hit triangle, then go back to the map and go to the pref. institute, and do your workout again. This time, when you add your stats, the stats from the previous workouts should also be boosted.

One of the best ways to confuse the opposing defense is to run multiple plays out of the same formation. Use Practice mode to master every play in a given formation to keep the defense guessing.

Type in smartie as a cheat

Enter "5LAWO0" as a code to get the Lame Duck card. This card forces your opponent to throw nothing but lob passes for one half, which allows the defense more time to react to the ball, and leads to more deflections and interceptions.

Enter QOETO8 as a code.

Enter XLI RLA9R7 as a code.

Enter XLII WRLUF8 as a code.

Enter XLIII NIEV4A as a code.

All NFC Hall Of Fame Card

All AFC Hall Of Fame Cards

Enter NOEB7U as a code.

To Go Undefeated For A Season

We have no easter eggs for Madden NFL 07 yet. If you have any unlockables please submit them.

We have no glitches for Madden NFL 07 yet. If you have any unlockables please submit them.

We have no guides or FAQs for Madden NFL 07 yet. If you have any unlockables please submit them.

Submit a cheat for Madden NFL 07