Use the above links or scroll down see all to the Xbox 360 cheats we have available for Madden NFL 09. 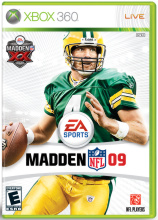 First, select My Madden, then Rosters. Hold the left trigger button and scroll through to NFL Greats. Hold right trigger button to scroll through positions, select your favorite NFL legend, then release him. Back out to Free Agents, add the NFL Great to your team roster, then select Game Modes and choose Superstar. Next, select Play as Rookie and your NFL Legend should be at the top of the list.

During and extra point attempt or a field goal attempt go up close to the center between two defenders. Make sure your player is not in pass protection mode. As soon as they say hike sprint towards line and press Y, this will sometimes get you through the blockers. Then the rest is up to you, you can either press X to attempt diving block or press Y again to attempt jumping block. I have blocked 3 field goals with this format.

K . So say you are using the Chargers? You can take Luis Castello and put him at the Defensive Tackle possession instead of having him at defensive end. He is more affective this way. Many defensive ends with high power move ratings will be great at defensive tackle. And the plus of having the speed isn't bad either. //// Most corner-backs that have high speed, such as Deangalo Hall, make great free safeties. At times you can take Strong safeties and switch them to Linebackers by going into player management, selecting the player, and selecting "Edit Player" then switch position to Linebacker. This can work well with Bob Sanders or Troy Polomalu. Outside linebackers can be switched to defensive ends for a better rating also. All of this can give a major boost to your team in areas where needed.

Easy First Down Or Touchdown

This cheat works best with the Titans because they have good blockers. This doesn't work with Chris Johnson because he isn't strong enough. First, trade Adrian Peterson or Brandon Jacobs to them or someone strong like them. Next, select the play HB Off Tackle in Outside Handoff and motion Justin Gage next to the tight end by being him and pressing the left stick to the right. This will provide more protection. When you snap the ball, juke left and then start sprinting. Justin Gage isn't the best blocker so you will need to truck a few times.

Any NFL Great In Franchise

Enter Kpast as a code.

Go to tho main menu and find create a player then put his first name BONES and put his last name JACKSON!!

How To Get The Secret Achievment

First go to My Madden then Roster and Create a Superstar and his name will be John Madden and forget the rest just do not save after doing this.

To get the stealing thunder achievement, score a touchdown then hit the b button and you will get it.

Create John Madden as a player to unlock this achievement.

We have no easter eggs for Madden NFL 09 yet. If you have any unlockables please submit them.

We have no glitches for Madden NFL 09 yet. If you have any unlockables please submit them.

Run 50 yards in one play.
Submit a cheat for Madden NFL 09