Use the above links or scroll down see all to the Xbox 360 cheats we have available for Madden NFL 12. 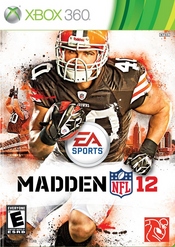 Select play now, click randomize until you see a picture of john madden and now you can play as the dev team. They are rated 99 overall. I would recommend using them to help unlock achievements.

Start a game and when first get the ball. Make sure you got the best QB and WRs. Do hail mary trips. Look at the closest WR of the 3 on your right. Then say hike. Then throw it to the one that you look at before you said hike.

Sack Them Without a Flag

Go to a game. Then go to where you setup penalties and flags, make offsides 0. When your on defense go pass the line before they say hike and without touching the other team players wait for them to say hike. Then tackle them!

What you need to do is delete all your plays in custom playbook but if some can't delete then thats ok so once you delete the plays you save and play you should be playing with some plays then in game flow it shows a question mark hit A, then they should be grouping together and the dfensive will get penalties for encroachment.

"Edit player "must be on in settings. Choose a player you wish to resign before season is over. Go to "edit" player and change his position to punter or kicker regardless of what position they play. IF the computer says the "team will fall below the minimum requirements at the position , You may have to sign a low level free agent at the player's SAME position that you are trying to resign, or you may have a EXCESS player already on your team that you can change their position temporarily. Once you change the position go back and resign the player. The computer will now look at the player as a punter/kicker and you can resign the player for as much as 7 years, no signing bonus, and minimal salary. Once resigning is done don't forget to change the players position back to normal and save it. Beat the cap!

Also if you have the edit player setting on during a franchise season, you can increase any players attributes to increase their overall rating to your liking. Just go to manage player then choose "edit player". From there increase his attributes then don't forget to save the changes. You can make your entire team 99s in franchise mode if you wish.

Get A Better Team In Superstar Mode!!!

If you have a bad team in superstar mode, you can request a new team (under edit superstar).

First you get all the good players on your favorite team. Once your in the season you put NO salary caps so if you forgot somebody than you can get the people you didn't get that you like.

During the last 30 seconds of the game, NOT PAUSED, press LT+RT+LS+RS together. When the clock runs out your players will dump Gatorade on the coach

We have no unlockables for Madden NFL 12 yet. If you have any unlockables please submit them.

We have no easter eggs for Madden NFL 12 yet. If you have any unlockables please submit them.

We have no glitches for Madden NFL 12 yet. If you have any unlockables please submit them.

Submit a cheat for Madden NFL 12