Use the above links or scroll down see all to the PlayStation 2 cheats we have available for Madden NFL 2002. 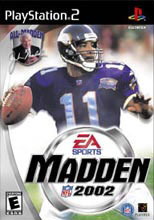 Play as a really good team. Play against either a European team, or the Monsters or mummies. After the coin toss, set the A.I. in every category all the way up for you. And all the way down for the computer. Depending on how well you play, and if you play at All-Madden level, you should have about 600 to 1100 tokens.

If you want tokens to get more Madden Cards just sell(if you have it) the card with John Madden on the front. When you sell it you get all the tokens plus, when you buy your next pack, you will get the card back! You can keep doing this over and over and over. It'll work everytime!

Blocking a punt is too easy! Choose to return a punt(center), never choose to block a punt. This is based on whichever side the opposing team has their last blocker before the punter. If he's on the right, you come from the left, if he's on the left, you come from the right. Shift your linemen to whichever side their last blocker is, take one of your outside guys from that same side, run him over to the opposite side, line him up about two body lengths away from the last lineman. At the snap of the ball press your directional pad down and hit the "O" button for a run burst. Keep going more than likely if you've timed it right, you will tackle the punter, if not you will have to jump and block it.

If you want to pile up sacks in a game, use the 3- 4 deffense, choose OLB Blitz. Shift your linemen to the right, shift your linebackers to the left, take your middle linebacker and put him between the LG & Center of the opposing team. You will be this linebacker, do not put him as a down lineman, that's too close. As soon as the center snaps the ball hit your "o" button & press down on the control pad. You will run through the line and hit the QB quick! You will get blocked after awhile, if this happens, do everything the opposite way, instead of Linemen to the right, go left and so on.

When signing your free agents, you can lower their requested amount a 100 thousand if you keep the contract short.

Always Get The Ball

First under the settings turn off penalties. Then when you're in the game always do an onside kick. Move the arrow as far as possible to the left and down as far as possible. Then kick the ball you should always get the ball unless you kick it to hard and it goes out of bounds.

Here is a very easy (I mean REALLY easy) way to get madden tokens. First go to the main menu and select rosters under options. Select any team and go to the edit player selection. Change all of the player stats to 15. Save your roster and go to Two Minute Drill. Choose the team you changed for the defense. Then choose a profile to save it to. Choose the Ravens (or a better team if you have on)and select All Madden level and begin playing. Find a good runing play and keep doing it if you score a touchdown. If the defense brings you down, then call timeout. If you scored about 4-8 you should have around 300 tokens!

First you the get the Giants, then you pick J. Fassel's playbook. After that, when your on offense, you pick singleback, then you pick WR Quick in. When you throw, throw to R1. But before you throw, go to the side that R1 is going to, then throw.

Dancing Into The Endzone

When your player is wide open, press L1 or R1 before running into the endzone and your player will do a dance.

Easier Compleation Or First Down

For an easier compleation, or first down choose J. Fassel's play book. Then choose the "Single Back" formon. Then, after choose the play "Corners." Before you get sacked throw it to the "O." Although the catch may go out of bounce its ok. You have till forth down. Note: This works the best if you use the giants and Ike Hiller as the reciever.

After you first see the players running onto the field for the coin toss, start tapping X. Keep tapping X so that you pick HEADS right away and stop tapping once the ref starts to flip the coin. You will always win the toss but this only works if your the visting team.

When your playing madden 2002 in any mode, you can get a cool camera view by jumping into the end zone at the corner closest to you. When the replay comes on you should see the black above & below when it is like that look at the replay. It will stop as you jump into the end zone and rotate (like the matrix) then start to move again.

On a punt or field goal on the snap press triangle. If the person don't kick that mean you can't see or you are doing it wrong.

Get An Extra Blocker While Passing

Before you snap the ball, press the triangle button (hot route), then a reciever of your choice then R-2. This will give you an extra blocker while passing. You can even press a running back icon.

Run Fast At A Kick Off

When you kick the ball off to the team press triangle and you will run much faster.

Before trying to create a franchise you should learn the game first. You should go to practice first and that will help you learn plays, then maybe tryin trying 2 minute drill. If you spend quality time on those you will be ready to start to play.

When you get to the main menu, hold the down button and the screen will flash.

Enter the options screen and select "Rosters", go to "Edit Player", then go to "Player Appearance". You can make any player in the NFL look different than they really do.

To do a better catch than the normal one, where the player throws his hands in the air at the last second and most of the time misses, simply press Catch a second or a half a second before you reach the target of the ball, or before the ball reaches the receiver. The player will do a better looking and more effective catch, such a one handed catch, a jump catch, a spin catch, an over the shoulder catch (good for lobs), or a better diving one if the ball is out of reach.

For easy tokens, go to the two minute drill screen. Choose two to four accounts, and the Admirals for defense. Choose your team and make sure you choose a profile to save to, then start playing. Keep throwing to WR2 and you should get a lot of touchdowns. It is possible to get a score over 33,000 with this trick.

In the off-season in franchise, save, then create a team. Load the franchise and enter the team in the expansion draft.

When everyone is far away from you, and you are running for a touchdown, hold X and hit either L1, R1, L2, or R2 and your player will do a dance.

Create a player, then go to "Edit Player" at the roster screen. Press Up or Down to choose the player you want to edit. Press Right to get to the speed category. Press X, then press X again.

After the first season in franchise mode, do the expansion draft for the Houston Texans.

Getting these Cards will unlock the team for Exhibition play.

Set the system date to December 25 to hear Christmas commentary.

Set the system date to the third Thursday in November to hear Thanksgiving commentary.

We have no unlockables for Madden NFL 2002 yet. If you have any unlockables please submit them.

We have no easter eggs for Madden NFL 2002 yet. If you have any unlockables please submit them.

We have no glitches for Madden NFL 2002 yet. If you have any unlockables please submit them.

Submit a cheat for Madden NFL 2002