Use the above links or scroll down see all to the Nintendo DS cheats we have available for Mario &amp; Luigi: Partners in Time. 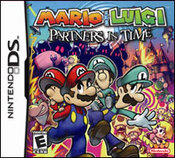 After you've learned the Bros. Ball move, go to the room on the left side of Peach's Castle (not in the past) and use the Bros. Ball on the machine. A blue pipe will appear. Go down the blue pipe and you will end up in the castle's sewage area. Go to the next room and you'll see a figure wearing a red cape go in another room. Follow the figutre and you will see him again going in a pipe. Use the babies' hammer drill move to go in the pipe. When you're in there, go to the very end of the pipe and you'll see a big room. Go in there and you'll see Fawful running a store where you can trade beans for rare badges.

After beating the shroob that eats candy there is a plant monster the fire is its weakness.

Note: you must unlock the thwampvolcano. First go in the volcano, then go right, and keep going, you should see a small square hole, go in it you should also see a floating man, go past him , he should fall, and ask you to play, the choices are: normal, tough, and extra blurry. If you get 3 stars you get:1bean (normal), 3beans (tough), and5beans (extrablury). Note: Each game is 100 coins.

When you use the Brother Item: Smash Eggs, bump the egg with the baby brother and it will change who the egg goes to.

When the brothers use the Jump Attack, Mario does a back-flip and Luigi does a front-flip

Like save albums, you might come across recovery blocks. Recovery blocks are white blocks with red hearts on them. These blocks will fully restore HP.

Swiggler is a boss that you'll find at the end of the Vim Factory level. The Swiggler will be helped by 2 Dr. Shroobs that are holding red and gray mushrooms. When a Dr. Shroob has a red mushroom, do not attack it or the mushroom will be dropped in Swiggler's drink and he'll be able to regain health. If the Dr. Shroob has a gray mushroom, attack it with your hammer and the mushroom will be dropped into the drink for Swiggler to be poisoned and have health taken away. Inflict 250 HP on Swiggler and you'll be able to move on to the next level.

Shrooboid Brat is the boss at the end of the Gritzy Desert level. Brat will use the audience to decide on who to attack. The audience will hold up signs either having M or L. These signs might change colors sometimes. Whoever has more votes by the audience (Mario or Luigi), Brat will raise his lollipop and attack the one with more votes. Scan the letters quickly so you'll know which character to dodge the attack with. Inflict 900 HP on Shrooboid Brat and you'll be able to move on to the next level.

When you're inside Yoob's belly in the Yoshi's Island level after you've pushed the second chomp rock out of the way, go to the room to the very bottom of Yoob. The Yoshis will be in there looking for the exit. Talk to some of the Yoshis and they will give you some items like Smash Eggs, a badge, and a 1-up Super.

In the game you might come across purple books with an S on them called Save Albums. By jumping and hitting them like a block, you can save your game. The next time you play, you will start at your last save album.

We have no cheats or codes for Mario &amp; Luigi: Partners in Time yet. If you have any unlockables please submit them.

We have no unlockables for Mario &amp; Luigi: Partners in Time yet. If you have any unlockables please submit them.

We have no easter eggs for Mario &amp; Luigi: Partners in Time yet. If you have any unlockables please submit them.

We have no glitches for Mario &amp; Luigi: Partners in Time yet. If you have any unlockables please submit them.

Submit a cheat for Mario &amp; Luigi: Partners in Time