Use the above links or scroll down see all to the Game Boy Advance cheats we have available for Mario &amp; Luigi: Superstar Saga. 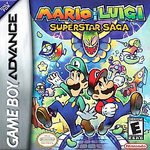 How To Beat The Guy At The End Of Teehee Valley

Keep hitting the plant on his head.

After collecting many beans you make different blends at the star bean cafe a old man will come out and ask for a sip say yes. He will act weird. Sometimes he will give you something. You will still have the blend afterwards.

At the end credits of the game (after you defeat Cackletta's ghost and escape from bowser's castle), one of the people's names is Pierre Sanchez and that is Iggy Vanzandt's Dog's name (From Tony Hawk's American Wasteland).

Before going into Teehee Valley, go left and into the cave. Shrink Mario and go to the end where the pipe is. Go back to the second yellow platform and jump on the little ledge. Jump right and follow the path right to the Monty Mole.

There is a shop in Beanbean town that makes you pay 100 coins for information for where to go next. Instead of "wasting" 100 coins. Go save somewhere and pay him 100 coins. He'll tell you what you have to do/where to go next, then just shut the game off and do what he told you to do.

In StarDust Feild go to the castle and play the junping game and choose the last one and beat it with out dying and get five TeeHee beans. (Play it five times to get tweenty-five beans.)

Go to the very top corner of hoohoo mountain and you can see a tiny image of the castle.

You can get special items by making brew at the beanbean castle town. You must equip them first to work.

Whenever Hermie hides in his shell, he will heal somewhere around 11-17 HP after two attacks. To prevent this, use Mario's hand power when Hermie starts hiding. You'll burn his decorations, and he come out mad. The more you scare him out of his shell, the more HP not wasted, which adds up to faster defeat!

How To Beat Mum Pirana Plant

Whatever color the pirana plant is hit it with the opposite color. eg. If it is red hit it with Luigi's thunder hand, if it is blue hit it with Mario's fire hand.

Have you ever wondered about those small fences you can not get past? Once you get the hammers and meet the brothers near Chucklehuck woods you can hit Luigi with the hammer. When you do this Luigi will be under ground. (You will be able to see his hat) Then you have to crawl under the fence in which you will be seperated.

At Bowser's Castle, there is a part where a paper Bowser is hanging on strings. There is also a little axe is next to it.

At the Yoshi theater, a Kirby poster can be seen hanging on the wall.

At the Yoshi theater, a Wario poster can be seen hanging on the wall.

One of the items that Professor E. Gadd gives you is an item called "Great Force", which actually looks like a Triforce piece.

Go to the arcade in Little FungiTown and play the mini-game there. Geno can be seen in the corner.

When the fight begins, start by making Mario jump on her right arm. Her arms are her weak spot. Meanwhile, have Luigi pulverize her with his hammer so that she gets knocked back. Do not let her get too close. After your turn is over, Queen Bean will start sending shockwaves your way. Dodge them and repeat. After her right arm shrinks (usually requires six hits), go for the left arm. Her shockwaves will be weaker, but faster. After her left arm is toasted, her crown will fall off. At this point, she will start shooting lima beans at you. Barrage her with jump attacks, and when her arms get their strength back and her crown is back on her head, repeat the process to defeat her.

Sometimes it is hard to dodge a monster's attack because you pressed the wrong button. If this keeps happening, try pressing A + B.

Hee Beans are easy to get when you know where to find them. You can get them in the following places. Note: These mini-games only work after the first time you play them.

You can get Woo Beans by defeating enemies west of Beanbean Castle.

This trick should work after the Chucklehut Brothers teach Mario and Luigi their hammer techniques. Have Luigi use his hammer to shrink Mario.. Then, perform their "high jump technique", but have mini Mario jump at Luigi before Luigi can land on Mario. You will gain one coin. Repeat this to get as many coins as desired. Note: This was done after getting to the university section of the game. Note: Hitting Luigi for one coin will lower Luigi's HP by one point. He will only "yelp" when his HP reaches 1. However, you can still spend some of the bonus stats that you get at level up on the "Stach" stat (which discounts the items in the shops) and buy mushrooms at the castle town and recycle (i.e. use the "Easy money" trick then buy mushrooms to heal him and gradually generate money).

We have no cheats or codes for Mario &amp; Luigi: Superstar Saga yet. If you have any unlockables please submit them.

We have no unlockables for Mario &amp; Luigi: Superstar Saga yet. If you have any unlockables please submit them.

We have no easter eggs for Mario &amp; Luigi: Superstar Saga yet. If you have any unlockables please submit them.

We have no glitches for Mario &amp; Luigi: Superstar Saga yet. If you have any unlockables please submit them.