Use the above links or scroll down see all to the Wii cheats we have available for Mario &amp; Sonic at the Olympic Games. 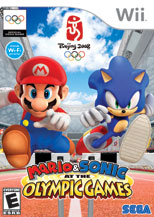 To get a bouncing emblem, go to trampoline and get a 10000. Or to make it simple, get greats for the whole time.

If you have a Nunchuk, you will run a lot faster and it will be easier becuase you can split the work between your two arms instead of only in one arm!

To unlock the penalty emblem, get a penalty in the 100m dash

To unlock high jump, play as every character at least one time.

How To Unlock Each Circuit

Successfully complete the indicated task to unlock the corresponding circuit:

How To Unlock Each Event

Successfully complete the indicated task to unlock the corresponding event:

To unlock this emblem, go to rankings on the records and if you have wi-fi, go to update records and you get the emblem.

Unlock the Thanks For Playing Emblem

To unlock Silver The Hedgehog you must set a world record in all games.

To unlock new events, you have to beat a circuit in Circuit Mode. (There are some circuits in master's class that you will not unlock any events in.)

To unlock emblems for characters, you must beat all the missions in Mission Mode for that character.

To unlock the complete game emblem, unlock all the events.

To unlock the full play emblem, unlock all the events and play each event once or more.

Unlock everything in the gallery (do all 25 easy minigames).

Do a successful start dash in 100m.

We have no easter eggs for Mario &amp; Sonic at the Olympic Games yet. If you have any unlockables please submit them.

We have no glitches for Mario &amp; Sonic at the Olympic Games yet. If you have any unlockables please submit them.

Mario & Sonic At The Olympic Games

Submit a cheat for Mario &amp; Sonic at the Olympic Games