Use the above links or scroll down see all to the Game Boy Advance cheats we have available for Mario Kart: Super Circuit. 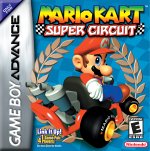 Yes this is true. The more you use a character the better they become. You might not notice it at first but over time they might become better. For example Bowser's handling might become much better over time.

Yes indeed, there is a secret character in Super Circuit. Not the easiest to get, but it exists. To get Waluigi, you have to beat the entire game. That means beating every single race with a gold cup (including specials and secret tracks) and doing it with all cc's, 50cc and on. As I said, not easy, but possible.

On the character select screen, if you push select before picking your character, you can hear thier horn. Note: Each character has a different horn sound, so try them all!

Stupid, Pointless, Good For Nothing Fun

When selecting you character, press L or R and your character will shoot and jump. You can't select a character before trying this or it wont work.

Driving Across A Stream

In Mario Kart Super Circuit in the level so called Riverside Park after the first big turn there is little dock. Go to that dock and there will be anouther. try to get over the water in between. You should save around eight seconds. P.S. It takes lots of practice and do I mean alought.

On any track press A and B at the same time then turn left or right (don't try it on ones that you can fall off the edge or you willfall off the edge) and you will start doing donuts.

If you have a green shell and someone is passing you, just bump in to them and they will explode.

Before you complete a race, grab a single shell of any kind and hold it behind you by holding the L button before and after you cross the finish line. Any time after that you can let go of the L button and watch yourself shoot the shell.

You can lay Spiny Shells behind you by holding L and down. It will sit like a bomb and home on someone when they come buy.

I think these are the funnest shortcuts in the game. First: When your at the stretch that has the bouncing stars, use a mushroom near the beginning of that stretch going directly left. Make sure you get enough speed and you probably won't have to turn while in air. Second: Use the stetch of "rippers" that looks like it is not connected to the track to the left. Make sure you don't bounce on the sides. As soon as you get on the main track, make a hard right turn and still turn some while in the air and you should be able to land on another "ripper". Do not try this if you do not get enough speed.

In the levels that you can fall off, push A about halfway down the screen when Laikitu drops you back on the track if you fall off. You will get a turbo boost.

After the fifth bridge if you look to your right, you will see a small jump and two jumps in the middle of the water straight ahead. Use a mushroom straight on the jump and if you stay in the line, you will be on the other side and have skipped a substantial amount of the course.

At the first jump, use it to jump over the right wall. It's a decent shortcut.

Don't think the coins are useless! Collect these coins and you'll increase your top speed.If you run out and hit a player you will spin out. They will also add to your ranking at the end of a cup. The amount of coins you receive at the begginning depends on your spot in the lineup. If you are in the back you will receive more coins, etc.

With these shells you can try to run into other players, shoot obstacles, or the hardest, try to shoot down others with them.

Get a fourth or worse OVERALL ranking. When the ending movie comes up, the stand will fall on and squash your character. It will then show the character in it's window crying or throwing a fit. It is quite hilarious and worth the trouble.

Start the Cheese Land race in either eight place or on a quick run. A mouse will walk over right next to you and check you out before the start- off. It's pretty funny.

If you happen to hit a banana or other obstacle that makes you spin out, press b right after you hit it. It takes practise but is not hard to master. You will hear a sound effect and see a musical note above the character's head if your successful.

After a couple of turns at the beginning there will be a small item box that is only accessible by a small jump. If you get a mushroom, use it and go off that jump. You should land on the track way ahead. I went from last to first!

If you want to screw up some people in front of you instead of behind, hold L and push UP to throw a banana way ahead of you.

Sometimes you may end up head on in front of a wall or slowed down right in front of a crucial jump. Press B and Down to go into reverse.

Shoot Red/Green Shells Behind You

No good racer in first place can win without this hint! If you get a single green shell hold left and down to shoot it behind you. This is the same with the Red shell. It does not work for multiple shells. If you are racing in a cup, and if you get a red shell while your in first place, you can shoot it behind you a couple seconds before the finish line on the last lap. This probably will mess up the character that is in second place resulting in a lower score for him because the red shell will home on him.

When you need to turn in an instant, press both "A" and the "B" buttons and the direction you want to turn. If you hold it long enough you'll do a 360!

Shoot A Green Shell At The Character Select Screen.

To do this pick a character but do not hit ok. Then press the L button.

Jump At The Character Select Screen.

To do this pick a player but do not hit ok. Then press the R button.

To get a double star ranking on the mushroom cup you have to get 170+ coins and 1st place obviously. Same thing goes with the other cups, i think.

Just before performing a U-turn hit the jump button and hold in the direction you would like to go. This will make it easier to make those tough U-turns.

If you get a 3-star ranking in all of the Super Circuit cups, your screen changes into a night background and you get new music.

Hold L + R + B + Start and power on the system to delete the current saved data.

Just before the last light turns on during the pre-race countdown, press Gas to get a quick start.

During a race, press Select to use the horn.

At the character selection screen, press L to shoot a green shell or press R to jump.

Beat all of the cups in the difficulty first. Then go back and beat them again with 100 coins in each cup. Then press L or R to switch.

When you get an item block you see a lot of items spinning, press L to stop the items you've got to quick to get the item you want.

Let The Computer Pick You Own Character

In 1p mode in 50cc, 100cc, or 150cc when it lets you choose your character hit the block with the question mark twice and the computer chooses for you.

Press L to Shoot to items if you have any.

Successfully complete all circuits in all classes to change the background color of the title screen.

Win a gold cup in all the races to unlock the Special Cup circuit.

Win with an "A" or better ranking on each cup in GP mode. Then press L or R at the cup selection screen to gain access to the Super Mario Kart tracks.

We have no cheats or codes for Mario Kart: Super Circuit yet. If you have any unlockables please submit them.

We have no unlockables for Mario Kart: Super Circuit yet. If you have any unlockables please submit them.

We have no easter eggs for Mario Kart: Super Circuit yet. If you have any unlockables please submit them.

We have no glitches for Mario Kart: Super Circuit yet. If you have any unlockables please submit them.