Use the above links or scroll down see all to the GameCube cheats we have available for Mario Party 6. 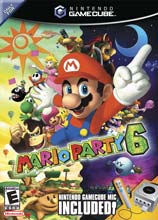 Fruit Talk-tale is a mic. Mini-game. To get to it go to the main menu and select mic. Mini-game mode. I have two tricks. 1)DON'T press the talk button on the mic. If your playing with you family (still talk into mic. Though). 2) Say a fruit that is not there to get a random fruit.

This is an easy, but long process. An easy way to get more stars into the Star Bank is to play Bowser's Enchanted Inferno in Solo Mode. Beat as many mini-games as possible and land on the very last space to get 50 coins + the Rare mini-game. To make this easy, when you pass Orb Spaces and get the Sluggish 'Shroom Orb, use those to land on the green "? " spaces, which will push you back to the beginning of the board, so you can keep playing more mini-games, thus getting you more coins which will turn into Stars in the Star Bank at the end.

In the Mic Mini-game "Word Herd, " try saying "Ukiki. " This may help you out. Note: you can only use this word three times in one game, so use them wisely.

Lab Brats is a Rare Mini-game that you can obtain by landing on the Rare Mini-game Space (very last space) in Bowser's Enchanted Inferno in Solo Mode. The highest rank in this game is skill level 16. It is very tough to achieve that rank, however.

After you purchase the Miracle Book in the Star Bank, you will have to then buy all of the pages of that book before you will get to see the epilogue.

In the Mic Mini-game "Shoot Yer Mouth Off, " try saying "zero. " This may help you out.

In the Mic mini game Verbal Assault, try saying "Goomba" or "Bullet. " This may help you out.

When in solo mode "try" saying the number you want ot hit it will work every 5 turns i figurd out so enjoy!

In the Verbal Assault game I guess they forgot to tell you about the last attack. Say "Drop" into the mic and screws and bolts will fly at the opponents.

To get the rare mini game Seer Terror you need to buy it at the star bank for fity stars.

To get the miracle book, go to the star bank and find where the miracle book is. I think it is the very first thing but I don't know because I rented this game and I already returned it. The book is 10 stars. The book comes with the Prologue and the first page. The miracle book is a pop-up book filled with pop-up pages from the mini-games. The first page is from the mini-game Blooper Scooper. The prologue is about Mario and everyone and the hosts Twila and Brighton. Twila and Brighton have a fight about who's better, then Mario had an idea to throw a Mario Party. The book dosn't have all the pages so you have to buy them. The prices get higher and higher. The prices are: 10, 20, 30, 40, and I think 50.

If you want to here your character's taunt, buy it at the Star Bank for 10 stars each. Toadette's taunt is not there because when you buy Toadette for 30 stars, she comes with her taunt. The taunts aren't like in Mario Party 1,2,and 3, they are actually a little bit funny.

They don't cost 10 stars for no reason at all. It sounds more funny when they say it!

To fake out your friends on mic minigames, talk into the mic without holding the button down.

On the game mic game "fruit talktale", say tomato for a random fruit to stay up. This will trick your opponents.

If you want new games, and stars fast, be Boo, or Toad in Solo Mode, gather as many Sluggish Mushrooms as possible, then when your down to abot 5 spaces, carefully get to the Rare Mini Game Space.

If you play Star Sprint you can earn stars for the Star Bank.

To play as Toadette get 30 Stars in the Star Bank, then Toadette will be available to buy.

To get the clock work castle you must have 100 stars in the star bank.

If you are the single player with the Mic playing Fruit TalkTale, You can say "fruit" and a random fruit will be chosen.

To play as Toadette get 25 Stars in the Star Bank, then Toadette will be available to buy.

Go to party mode and give yourself 9 bonus stars and they will go to the star bank when the games over.

On the game mode selection screen if you say fly guy in the mic, fly guy will appeare.

We have no cheats or codes for Mario Party 6 yet. If you have any unlockables please submit them.

We have no unlockables for Mario Party 6 yet. If you have any unlockables please submit them.

We have no easter eggs for Mario Party 6 yet. If you have any unlockables please submit them.

We have no glitches for Mario Party 6 yet. If you have any unlockables please submit them.

Ways to Cheat in This Game

Submit a cheat for Mario Party 6