Use the above links or scroll down see all to the GameCube cheats we have available for Mario Power Tennis. 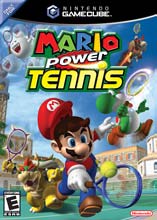 To unlock Star Vup, just beat the 3 tournaments of the normal cup.

To unlock Bowser's Court,just beat the Fire tournament of the special cup in singles.

On the start screen hold down (Z) and push (Start). You should know have event games. (This will not stay forever, you will have to do this each time you play.)

Gimmick Court, Are You Sure?

Play the Gimmick Masters Tournament with any character. Beat your opponent in a match. Go to Exhibition mode and fill in your preferences until the court selection screen. The court that you played on in the tournament can now be played in Standard, Ring Shot, and Item Battle modes.

These are the best positions, in my opinion, to place Tricky characters.

I put my speed characters in these positions.

I put my Defense characters in these places when I use them.

These places are where I would put my Power characters.

These, in my opinion, are the best positions to put your technique character.

I have found out that these court positions work best with the all-around characters.

Beat the three tournaments of the normal cup in singles.

Beat the three tournaments of the normal cup in doubles.

On the tile screen, hold the Z button abd press start. Event Mode is only for multiplayer.

Beat both special tournaments in singles.

When the ball is on your opponent's side of the court, press A or B to taunt.

Beat flower cup in doubles with any character.

Get A Character's Star

Beat the three tournaments of the normal cup and you'll get a star for the character you used.

Complete the star tournament in either singles or doubles with any character.

Complete the special tournaments in doubles.

To unlock the multiplayer event games mode hold the z botton at the mario power tennis title screen and then press start.

We have no unlockables for Mario Power Tennis yet. If you have any unlockables please submit them.

We have no easter eggs for Mario Power Tennis yet. If you have any unlockables please submit them.

We have no glitches for Mario Power Tennis yet. If you have any unlockables please submit them.

We have no guides or FAQs for Mario Power Tennis yet. If you have any unlockables please submit them.