Use the above links or scroll down see all to the Wii cheats we have available for Mario Sports Mix. 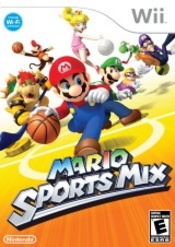 Defeating The Beheemoth An Easier Way

If you want to defeat the behemoth, an easier way is to follow these steps. #1 Have 2 players. #2 Make sure you have 1 more crystal to collect (or if you want to kill him for fun). #3 have player 1 collect items (dont shoot). #4 have player 2 collect that astroid pick-up thingy (dont throw). #5 Have player 2 step on as many pannels as you can because P2 will collect coins. #6 Now when the behemoth roars have P1 throw the item at the beheemonth so P2 can collect more coins without getting harmed but some attacks are non-avoidable so watch out P2.

You may think your doomed when you opponent uses their special move but here's how to get past them.
Mario:Get in the targets way (except in dodge-ball move away)anyway when he throws the ball shake the Wii mote hard as you can.
Luigi:Find a corner get in it the poltergeist can't get in hard to reach places. Then get in his way. Not in dodge ball
Peach:Run between the hearts then block (stay away from)the target.
Daisy:In Dodge-ball don't run in front of the ball. Then guard (stay away from)the target.
Waluigi:Simply guard (stay away from)target. Geez
Wario:Look at him and determine his shot then jump in the smoke to see where your at. Then press 2 at the second he strikes.
Bowser: Get out the middle of the court. Then guard (stay away from)the target.
Yoshi:He's tricky make sure you have players on both sides. Dodge-ball;Keep a real good distance.
Toad:Just avoid the mushrooms then guard (stay away from)the target.
DK:Jump to avoid the ground pound. Then guard (stay away from)target.
Bowser Jr:Basketball don't go to the 2-point area or near it jump at right time. Dodge-ball find a corner if he aims at you move at last second (P. S . When you move at last second STAY AWAY FROM RED YOSHI he might try to hit you while your still on the ground. Hockey;same as basket ball. Volleyball same as dodge-ball.
Diddy Kong: Dodge the banana in hockey check it.
Ninja:Its always the one in the middle. Must I say more?
White Mage:In all sports move at last second. Then block target.
Black Mage:I know this is stupid but you have to hit yourself with an item except bob-omb and mini mushroom to avoid being shrunk. Then get in (or out of) his way.
Moogle:Basketball block the first time she shoots as well in hockey and Volleyball.
Cactaur-Dodge each time he stings you. Basketball get behind him. Then block his shot.
Slime:Run Run as fast as you can't catch me I'm the slimey. Thing. Just don't get cornered. Then get in (out of) his way.
Mii:Same as Mario. Do I have to say more.

When playing online don't quit while playing you'll lose 100 points and get a loss.

Hold A and swing the Wiimote in volleyball.

In DK-dock if you hit someone in the water they are out.

On Profile menu, Highlight a profile (remember to keep it highlighted in the duration of the code). Enter by holding C or Z buttons and press firstly C111 then Z1111 and finally C+Z11111. You now have every sports crystal, most characters for all events, every course for all events, event selection screen backround and balls/puckey are/is gold and new event sports mix is available. Thank You for looking. If I could win a game it would be Sonic Colours Wii.

To unlock this last character, Rosalina, you must beat these mini-games in order:
1. Basketball
2. Volleyball
3. Hockey
4. Dodgeball.

To unlock his awesome red costume you have to be black mage 20 times in a certain game.

We have no easter eggs for Mario Sports Mix yet. If you have any unlockables please submit them.

We have no glitches for Mario Sports Mix yet. If you have any unlockables please submit them.

We have no guides or FAQs for Mario Sports Mix yet. If you have any unlockables please submit them.