Use the above links or scroll down see all to the Wii cheats we have available for Mario Super Sluggers. 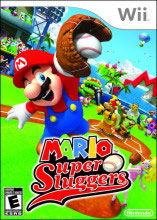 Hold down B and A then push 2.

In the training for close plays, did you recall what Lakitu said at the end? He said that characters with special actions can press the close play button again if they mess up the first time. Here are the characters who have the power to do that.

Note! When these characters get into a close play, you can press both A/B buttons simultaneously, and you automatically win, but that only works when they are on the offense side (running the bases). It won't work if they are on defense.

To make a close play, the runner has to be about a foot or less away from the base. Then the game will pause and it will tell you to press a certain button. Then the runner will either grow bigger and knock the ball out of the fielder's hand or will jump over the fielder. Sometimes it might be totally different. Close plays are not always done when your runner is about to be tagged out.

To do this, you need to use DK and another character that has chemistry. When the ball gets close to DK, use the B button to make him dive for the ball. Once you've done that, throw the ball really hard. If you do this correctly, you should see the ball turn blue and it will be full of energy.

Have Donkey Kong to brake the second crate in Wario's area.

Go to Dk's Jungle and use Mario to go through the pipe that is under the bridge, and you should land end up on the very bottom of the jungle and there will be a chest,(you will need Wario for this, if you don't know how get Dk to join your team, go clear up all the for in Wario's place then use Dk to climb up the vines that are on the building and he will join your team after you complete the scout mission!) and you use Wario's ability to open it up and there will be Daisy"s Cruise Pass and click on the sun and it will change to night(will only happen if you have beat Bowser Jr.) and click on Daisy's cruis ship, show the owner your pass and you can now shop there. The items aren't very cheap but it include a couple of new items in the shop that the others don't have!

To do this and get on it to change from day to night you need to go to Dk's jungle and do everything you need to do then when you have all leaders which are: Mario, Peach, Yoshi, Dk, and Wario. Then once done go back to Dk jungle and once you have raised the bridge go under it and chose Mario to go through it and there should be a treasure chest somewhere on the very last level in the jungle and use Wario's special move and you can go to the cruiser and you will find out that is is actually a shop at night but mini- game at day.

To open the chests that you see you need to save Wario from the roof top and play Waluigi to get him. Then once you beat Waluigi he gives up and will join your team and will let you open the chest. All you have to do is point the star at the bottom and a screen will appear. Then click on the current leader then look for Wario and click on him then get close to the chest and press the A button and it will open holding items.

Got Dixey kong to be your MVP

To buddy jump you need to people that are friendly with each other then press A next to that person, then press A again when coming down.

We have no cheats or codes for Mario Super Sluggers yet. If you have any unlockables please submit them.

To unlock Koppa in Challenge Mode, get Peach and use her power and the Koppa will come out of the WANTED! sign. (Note: you got to clear the fog to get him.)

Get all members of all teams, beat Bowser 2 times and Bowser Jr. one time and then play each team (change team leaders to play ALL teams) and once you have done all that you can have ALL the stamps.

To play the minigames you must beat bowser jr. and click on the sun to change to the moon and to change back just click on the sun. Now if not mistaken you can go under story mode and if you have beat Bowser Jr. and Bowser twice, then it shouldn't matter and you can play minigames during the day. There is one thing though, once you beat Bowser Jr. go back to day and you can now play a mini game in Bowser Jr.'s playground.

Unlock All Of Bowser's Team

You have to beat Bowser Jr. one time then after that get who you have to or want to have and play Bowser two times and after the second time you should be able to play him in exhibition and in story mode.

Get Dixie to join your team, then complete the scout mission.

Use Yoshi on the manhole behind the crates. You'll come up on the rooftop with a chest. Waluigi will drop down on you. Open the chest to get a new error item: Fireballs

Beat Bowser Jr. or buy it at the store for 50 coins.

Use DK to climb the vines to the rooftop.

Enter the password on the roller coaster controls (I remember the 1st three: 5,4,2). Wiggler will land on the flower. Complete the scout mission and he'll join you, also giving you a pass to Toy Field.

Exterminate the piranha plants in the Ferris wheel.

Beat him at the chest with the brushin it.

Use Peach at the stumps.

Exterminate the piranha in the pipe.

Use Wario to open the chest at the edge of the map and give it to Red Yoshi.

Get to the Roller coaster controls.

Use Yoshi by the trees.

Use Wario magnet on the right of the fountain to get Baby Daisy's rattle. Then, she'll join you when you give it to her.

Use Peach's ability on the flower pot and Petey will jump out.

Put the maze back together in the Peach area.

Talk to him with Peach.

Use Mario on the bushes near the flower pot to be surprised by the toads.

Use Peach's ability in the water, on the bubbles, on the dock.

Use Peach to wake Monty Mole in the sand

Talk to him on the clam.

Talk to them on the beach in the Mario area.

Get the key and unlock the shop which pinata is trapped inside.

Use Yoshi to shake the tree on the bottom area in the Mario area.

Use DK to bust the middle barrel.

Put the Daisy statue on the pedestal.

How To Unlock Baby Peach In Exhibition

You need to make peach your MVP during a game.

Get Peach. Then, go talk to Daisy. You will need to get the toad statue where the red toad is. Beat Hammer Bro. and take the stone statue and place it on the pedestal where Daisy is.

In challenge mode, Get the Luigi Flashlight at the store in the Mario stadium area, and beat Bowser Jr., and it should change to nighttime. Now you can play the minigame "Ghost K". Bowser will be available to beat, but only in nighttime. Once you beat bowser, Luigi's Mansion will be available in exhibition mode.

Get Peach to use Heart power on the toad-shaped bush and Baby Peach will pop out.

Buy the Cruise Pass at Peach's Ice Garden, play the minigame there, and beat Bowser.

Beat Bowser, and your team players who played against Bowser are now all-star.

Get The Error Item Badge

To get this badge unlock all the error items. The items are the fireball, the mini boos, and the POW block.

To unlock Wiggler and Toy Field in 1-Player challenge mode, go to Yoshi Park. Go to where you find Blue Yoshi and type in the correct numbers on the code machine. When you are done talk to Wiggler and he will go on your team and give you the pass to Toy Field.

We have no easter eggs for Mario Super Sluggers yet. If you have any unlockables please submit them.

We have no glitches for Mario Super Sluggers yet. If you have any unlockables please submit them.

We have no guides or FAQs for Mario Super Sluggers yet. If you have any unlockables please submit them.