Use the above links or scroll down see all to the PlayStation 2 cheats we have available for Marvel vs. Capcom 2. 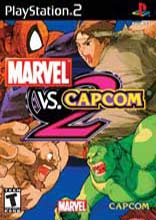 Breaking The House In The Clock Tower Stage

I used B. B . Hood, Warmachine and Ironman tag team special and had 255 hit combo and beat the game without a continue.

Go to training mode select magneto three times (first you must have all players, artwork, and colors) choose any three other palyer. Before you start fighting pause the game go to game options and put the infinite gauge on go back and you should be ready now. You can do this combo many different ways but it goes a lit somethint like this, use Magneto's Hyper Grab and the opponent is close do the Magnetic Dempest, over and over again, calling your other player to action. You should be able to get a 300 or more combo like this.

Even though she may look a bit odd, there are many hidden powers within her. Only a few of Spiral's moves are revealed in her command list. One secret move is her teleportation(half-circle backwards + low kick). As long as she is teleporting she is invincible. Her second secret move is a quick descent from the air(half-circle backwards + high kick).This is a good way of evading airbourne attacks. Another secret move is a Speed Boost(half-circle backwards + high & low kick). The faster you are, the faster you win. There's one last one. I have no idea what this one does but here it goes. It's a tough one (forwards, diagonal-down backwards and forwards again + low punch). After excecuting that combination, Spiral will stick her arms up in the air and wave her fingers as if casting a spell on her opponent. Don't ask me. I havn't figured it out yet.

During game play while using Sakura, press left, down, back and down (diagonal), and X. If you did it right Sakura will have darker skin and different moves (Ken's haduken, shinkuu haduken, etc). It's also Zangief's iron skin move. To undo the transformation just enter the move again.

To do the hyper/super attack a whole lot easier, press L1, L2. R1, and R2 all at the same time. This will do one of the super combos that the character has, (instead of typing in the real button commands). Note that to do a specific one that does not work with this you have to do the button command.

Select Cable, T. Bonne, and Chalsm (in that order), then get the level gauge up to at least 3. Press L1 + L2 to do a hyper combo and will unleash a powerful blow. Note: Try to keep the enemy on the ground. Also, this will not work every time. It will happen about half of the time.

Select Gambit, Iron Man, and War Machine, then get a level 3 hyper combo gauge and do all their hyper combos (L1 + R1). It should do a 114-hit combo. If not, try starting the Hyper Combo with another person.

When your special meter is at 3 or higher, press L1 + R1 to do any character's special.

Tyrant: Blow Him Up

At the character selection screen, choose Cable, Gambit, and B.B Hood. You will have to unlock B.B Hood and Gambit by buying them in the Secret Factor. During arcade mode, get up to at least to level 3 or higher. When you do, press L1 + L2 and all three of them will do their Hyper Combo specials. This combo will do at least 110 hits and a lot of damage. It works better when you are close to your opponent.

Have Marrow use the Bone Burst Hyper Combo as the finishing move for the last of the three opponents. She will throw one of her bones at the screen, breaking the camera.

You can get ten points a minute if you go to training mode, choose a character and opponent, then leave the game on for about five hours. Note: Do not pause the game. Plug in a second controller, go to options, change the time to 30 seconds, and turn up the damage. Go to versus mode, turn the handicap down on controller two, and fight. You will get 100 points for each match. Successfully complete all survivor mode, with any EX set if needed. Attempt to create an EX groove greater than 4000 points. Answer "Yes" and the game will allow you to do so. To get easy points in arcade mode, fight up to Abyss in any difficulty on high damage. Your best difficulty setting is recommended. Once at Abyss, intentionally die on purpose multiple times. Continue, then die again. You will get 100 points every time a continue is used. When you finally choose to defeat Abyss, you will also get 50 points times the difficulty setting. Enter the options screen. Select "Game Option" and set your difficulty bar high, choose the Turbo 2 speed, and have unlimited time. Put the damage bar on high. Go to arcade mode and choose any character with Cable (for example, War Machine, B.B. Hood, and Cable). When you begin at the first stage, make sure Cable's out first. Keep shooting with the pistol until your third opponent's life bar is half full. At this time your level gauge should be past 3. Use it at the correct moment and you will see more than 80 hit (s), plus the Perfect. You now have more than 300,000,000 points. Repeat this for the rest of the game .When you get to Abyss, be sure not to have him defeat one of your characters. Just keep shooting Cable's pistol until you get to his last form. On his final form, when Abyss shows up again, make sure your level gauge is at 3 or more to blast away.

Chose Ryu, Captain Commando, and War Machine (recommended in that order).Wait until you get three levels in your Hyper Gauge, then let lose your hyper combos with L1 + L2 (or L1 + R1).

Choose Iron Man, War Machine, and Cable as your team, and make sure you choose projectile as their ability. Charge your super meter higher then 3, and press L1 + R1 (default for partner A and B actions). The result should be all three of your team members will use their projectile super move, which will take care of the opposition provided they do not block. Note: An advanced part of this trick is to wait until your opponent uses his partner in battle, then use the attack. The result is devastating.

Use the following to switch between characters in the middle of the game. For example if you choose Cable, Ryu, then Ken, but later in the second stage you want Ryu to appear first -- Hold L1 for the second character and R1 for the third character at the versus screen.

Select Cable as your first character with Dr. Doom with Anti-Air Assist as your partner. Keep using Cable's Pistol and Dr. Doom's Assist move at the same time. Your opponent's life gauge will decrease.

Choose Juggernaut, Iron Man, and BB Hood (in that order). Put them all on their recommended assist types. Get 3 Hyper Combo bars and link them all together (L=R). It should kill the opponent in one hit. This move was tested on Cable, a medium damage taker. Choose Juggernaut, Incredible Hulk, and Zangeif. When at level 3, let Juggernaut be your active character, get very close, and press L1 + R1 to make them all do their hyper combos. This will instantly kill your opponent's character. Note: This attack best works when your opponent is in a corner.

This trick works well on Abyss. Select Cabal, Wolverine, And Megaman, in any order. Wolverine usually works best first. Use Berserker Barrage to take out the first form quickly, then Cabal to waste the second form -- just keep shooting. Use the recommended assist types. By the time the third form appears, use your level 3 plus Hyper Combo (L1 +L2 type), and the result will kill or be very close to killing anyone.

To get characters like Black heart Storm and the others for less points, go to the shop in secret factor. Keep on exiting and entering untill you see the character you like for less points. Though sometimes it may take a while, youll at least save points.

We have no cheats or codes for Marvel vs. Capcom 2 yet. If you have any unlockables please submit them.