Use the above links or scroll down see all to the Xbox cheats we have available for Marvel vs. Capcom 2. 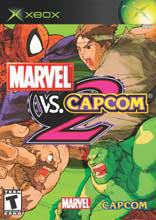 Way's To Break The House In The Clock Tower Stage

Choose Juggernaut, Iron Man, and BB Hood (in that order). Put them all on their recommended assist types. Get 3 Hyper Combo bars and link them all together (L=R). It should kill the opponent in one hit. This move was tested on Cable, a medium damage taker. Choose Juggernaut, Incredible Hulk, and Zangeif. When at level 3, let Juggernaut be your active character, get very close, and press L + R to make them all do their hyper combos. This will instantly kill your opponent's character. Note: This attack best works when your opponent is in a corner.

Choose Iron Man, War Machine, and Cable as your team, and make sure you choose projectile as their ability. Charge your super meter higher then 3, and press L + R (default for partner A and B actions). The result should be all three of your team members will use their projectile super move, which will take care of the opposition provided they do not block. Note: An advanced part of this trick is to wait until your opponent uses his partner in battle, then use the attack. The result is devastating.

Tips: For Getting Easy Points In Differnt Modes Of The Game

You can get ten points a minute if you go to training mode, choose a character and opponent, then leave the game on for about five hours. Note: Do not pause the game. Plug in a second controller, go to options, change the time to 30 seconds, and turn up the damage. Go to versus mode, turn the handicap down on controller two, and fight. You will get 100 points for each match. Successfully complete all survivor mode, with any EX set if needed. Attempt to create an EX groove greater than 4000 points. Answer "Yes" and the game will allow you to do so. To get easy points in arcade mode, fight up to Abyss in any difficulty on high damage. Your best difficulty setting is recommended. Once at Abyss, intentionally die on purpose multiple times. Continue, then die again. You will get 100 points every time a continue is used. When you finally choose to defeat Abyss, you will also get 50 points times the difficulty setting. Enter the options screen. Select "Game Option" and set your difficulty bar high, choose the Turbo 2 speed, and have unlimited time. Put the damage bar on high. Go to arcade mode and choose any character with Cable (for example, War Machine, B.B. Hood, and Cable). When you begin at the first stage, make sure Cable's out first. Keep shooting with the pistol until your third opponent's life bar is half full. At this time your level gauge should be past 3. Use it at the correct moment and you will see more than 80 hit(s), plus the Perfect. You now have more than 300,000,000 points. Repeat this for the rest of the game .When you get to Abyss, be sure not to have him defeat one of your characters. Just keep shooting Cable's pistol until you get to his last form. On his final form, when Abyss shows up again, make sure your level gauge is at 3 or more to blast away.

When your special meter is at 3 or higher, press L + R to do any character's special.

Select Gambit, Iron Man, and War Machine, then get a level 3 hyper combo gauge and do all their hyper combos (L + R). It should do a 114-hit combo. If not, try starting the Hyper Combo with another person.

Defeat Abyss with any time limit in arcade and score attack modes. His first stage will be unlocked in training and versus modes.

Use the following to switch between characters in the middle of the game. For example if you choose Cable, Ryu, then Ken, but later in the second stage you want Ryu to appear first -- Hold L for the second character and R for the third character at the versus screen.