Use the above links or scroll down see all to the Xbox 360 cheats we have available for Mass Effect. 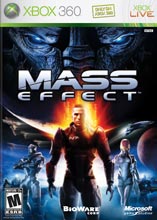 After you help the woman in the med bay from the thugs in the citadel station she will give you a discount on her items buy everything you can then go to the market place and sell the items you got then buy back then sell to med bay lady then repeat.

On the moon when you have to go and disable the rouge VI after you go to the last building and destroy the last node a message pops up with binary code on it. If you translate the Binary code to Text you will find out that the VI might not have been a VI at all. I will leave it upto you to translate. I don't want to spoil it.

The best way to kill organics are anti-personnel rounds and its upgraded version shredder ammo.

The best types of ammo to use against the Geth are armor piercing ammo and its upgraded version tungsten ammo.

Power Gamer requires you to reach level 50, and Extreme Power Gamer requires level 60. It is impossible to reach either one by playing the story alone, and it is impossible to reach level 60 on your first play through, because the cap is set to 50. The best way to accomplish it is to play every world and assignment, so that you receive the Completionist achievement. It gives +5% bonus experience, which adds up on your second play through. Second, whenever you land on a planet, do everything you find there. That includes salvaging all the debris. Second, do not use the mako for killing enemies other than the colossus, armatures, or dropships, because you only receive about half the experience for kills with the mako. There is nothing worse than sinking 12 hours of play trying to reach them, only to finish at level 49 with 1,000 experience to go.

Play as a War Hero Soldier first. By doing this, during your second play through you will have all of the money, weapons, and armor to use for the other careers.

This works with either Ashley Williams or Liara Tsoni. All you have to do is talk to either one after each mission and eventually their will be a romance seen. (Dont say anything renegade to them or else this might not work).

When you land on The Citadel you will encounter people that already know you, but they don't like you that much. To get them to like you more all you have to do is become a specter then talk to them once more and this time they will pay attention.

No More Radio On Elevator

When you go into the elevator make sure your team mates both have helmets on. When you press the elevator button turn your camera to in between them so they are the center of the screen. Most of the time this works if done correctly. Your team mates will talk about what they did and what had happened.

Easily Get Power Cells For Feros

When you go to fight the Varren on Feros there will be A crashed vehicle after the Alpha Varren. Go to the back of the vehicle get the power cells and continue your way back to the surface of Feros for an easy thousan exp. and two thousand credits.

Before you go investigate the prothean beacon go behind it your team should start talking about how it looks like a bomb hit it. I'd think you would agree.

Team Mates You Should Bring To The Thorian

To easily beat the Thorian you should bring either the asari biotic and Ashley Williams the soldier, or bring Wrex and another person that isn't Tali.

On the planet Feros you will end up having to fight a giant telekineses using plant called the Thorian. When you go fight the Thorian you will have to fight an Asari who keeps resurrecting itself and Thorian Creepers, so bring shotguns and biotic powers to this party.

Easy Getting Off Of Virmire

When your on Virmire you have one team mate arming a bomb while the geth are shooting at him, and on team mate with Salarians pounding the geth into the ground. Choose who ever is with the salarians, unless you want to fight a whole geth ship then save the team mate at the nuke, but going back to the geth ship is suicide, it's your call.

You won't be able to make a good shot on Saren when he is jumping around so wait until he stops to shot at and have your team shoot him or hit him with all the biotic powers, weapons, and overloadings that your team has until he moves again. Continue this pattern and Saren will fall to you in no time.

To Easily kill Saren before he is resurrected by Sovereign walk sideways avoiding his rockets while you are shooting at him, destroying his shields, or using biotic powers.

Boxes Before The Beacon.

Gun Out In The Elavators

We have no cheats or codes for Mass Effect yet. If you have any unlockables please submit them.

Complete the Bring Down the Sky mission.

After you get the Normandy go to Feros and Noveria and get all side quest info. To get the achievement travel to every planet that you can without go to Liara's dig site or Virmire. After you completed all of your side quests you should get an achievementif you don't open your journal, because you need to talk to somebody.

While your at the citadel go over to the consort chambers. She will have a mission for you complete it. When you get back get your payment,she'll tell you about you and then select the bottom dialog "is that it", Then you get a romance or sex scene and the achievement. Note: still do this if you are playing as a girl.

To easily get this achievement successfully complete the Mass effect play through twice on Casual.

Successfully complete on Mass Effect play through on insanity difficulty.

Successfully complete one Mass Effect play through on hardcore difficulty.

We have no easter eggs for Mass Effect yet. If you have any unlockables please submit them.

We have no glitches for Mass Effect yet. If you have any unlockables please submit them.