Use the above links or scroll down see all to the Xbox cheats we have available for MechAssault. 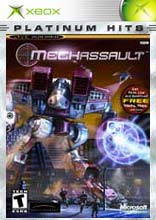 In Bright Lights, Dark City 2 after defeating The team of Elementals, instead of destroying the first 2 places, simply shoot the controllers to the door.

In area 51, there are certain structures that small mechs can go into. You can trap people with these. First, weaken the building, then lure them inside. Find some way to get out (one or two of the buildings have two entrances), and blow the building. The building will collapse, while your opponent is inside. This will damage them severly, and kill the weak ones. Note:The Ragnarok, and the Ymir cannot fit in these buildings. Also, on any other course, those players that decide to pilot those annoying elementals probably came up with a brilliant strategy. Don't they fly up on top of some builings so you can't shoot them? Well, shoot the building and make it collapse. The elementals are so weak, that they will be killed by the rubble. This also works with bridges.

Prime Strategy For Any Course

If there is a target on or under a bridge, then break the bridge. I suggest weakening it in advance, then blowin' it when a target is on/under it. This strategy can even kill an Atlas or Ragnarok. Almost every multiplayer course has a bridge, and many of the Campaign mission have one, too. This strategy has saved my hide quite a few times.

Even though you can't use it in campaign, you can be a killer with it in multiplayer. Its weapon system is also powerful (missiles, and a gauss rifle). The thing that makes it so good, is the fact that it is extremely fast. It is very very hard to hit and it can avoid rockets with ease. Well, the technique takes some practicing, but it can be mastered. it even has Null Sig. A strategy I find interesting, is circling the opponent, and firing all the time. As for evading the missiles, well, you can run zig-zag, run for cover, or you can try to make up your own techniques. it's kinda hard to explain, but I run one way, and all of the sudden, take a sharp turn the other way at the last moment. That's not exactly what I do, but that's the best i can explain it.

Any time that you are in a mission that has a lot of trees and you could select the Puma, you might want to. The prime Strategy is this : When enemies are around, go into the closest patch of trees, and you will be protected, then, when it is charged up, use your Null Signature (invisibility), be real still until your cannot be seen, then walk out a bit, and fire. After you fire, walk back into the trees and wait until you are completely transparent, then shoot again. Repeat this strategy over and over. Also, if there are a lot of trees around an area, then youyu can take cover in a patch. Then, when your Null Sig. is fully charged, activate it, wait a few seconds, then use your jump-jets to travel from one patch to another. If your null Sig. runs out, then stay in a patch and wait until it is fully recharged and repeat that strategy. This is a great way to get around. The secret? The trees cannot be knocked down, but they can be shot! They can block fire, but you may still be hit from certain angles. Also, if you can't see yourself (with null Sig.), then chances are, tanks, turrets, copters, infantry, and mechs can't either.

Get Inside A Building

On the multiplayer level River City, choose a Kit Fox and go to the big building that' by the gate. Use your Jumpjets andact like you are going to try ta get on top of the building. Your legs should just go through thebuildig. When your jumpjets run out, you should just fall in the building.

On the level where you have to run under the collapsing tunnel, don't run under it. Blow it up with your missles or PPC.

You can walk up virtually any hill in most maps with any mech, even the big Atlas & Ragnarok mechs. All you gotta do is walk up to them and start walking in zig zag patters and a glitch in the game will allow your mech to slowly work its way up the hillside. I have never used this glitch myself but have seen many use it in multiplayer games!

Get The BEST Mech

Beat the campain and you'll get the Ragnirock. The Ragnirock can put on a sheild if you click right control stick. His attack is 3 nucular atomic at once!

When you use the mech Puma if you click the right control stick he'll turn invisable for a period of time.

Fun Cool Trick! Blow Yourself Up!

Here's what you do: First start a GRINDER multiplayer game (There have to be more than 1 players for this to work). Then die. You will be a pilot running around on the ground. Then press in on the right analog stick (Defence weapon) you wil blow up (You have no weapons, can't walk backwards; it kinda stinks)

The Lowdown On Flyin' High

If you have jump jets, don't just stand there, FLY! At the tops of buildings enemy 'Mechs and other bad guys cant see you that well or shoot you. This can help you stay alive in the mission with the Elemental.

Fit The 'Mech To The Mission

Prior to each mission you can configure your 'Mech's weapons through a wide variety of options. But the really cool feature is the ability to do mid-mission weapon upgrades. Remember those smashed buildings? If you find a weapons facility building, bust it open. Inside will be bonuses such as a brand new Heavy Gauss rifle that can be installed right there!

Heat is a factor that must be monitored. Certain weapons generate heat as you fire them, so once your weapon overheats it won't function anymore, which takes you right out of the battle. So you can use natural settings to get rid of heat, like jumping into a river! Ahhhhhh…

Inside many key structures you'll find health packs and other goodies. This can mean the difference between a critical failure and mission success. Also, many of the buildings are spawn points for tanks and other nasties. Destroy the buildings and you'll have fewer opponents to worry about.

Don't walk into the line of fire, I learned the hard way. Use buildings and other structures for cover as often as possible. When you see those guided missiles heading your way, run like hell, and as erratically as possible. Sometimes you can shake them off and save yourself a world of hurt. If that doesn't work…

Yeah, those short-range missiles are pretty impressive, but save them for larger targets. You've got a really limited supply. The best plan is minimum firepower for maximum result. If you can kill it with auto-cannons and reserve the missiles for later, do it (and if you can squash it instead of shooting it, all the better).

Listen To Your Surveillance Team

These guys have the skinny not only on the mission objectives, but places to hit for bonuses and places to outright avoid.

We have no cheats or codes for MechAssault yet. If you have any unlockables please submit them.

We have no unlockables for MechAssault yet. If you have any unlockables please submit them.

We have no easter eggs for MechAssault yet. If you have any unlockables please submit them.

We have no glitches for MechAssault yet. If you have any unlockables please submit them.

My FAQ and Walkthrough

Submit a cheat for MechAssault