Use the above links or scroll down see all to the Game Boy Advance cheats we have available for Medabots AX: Metabee Version (Red). 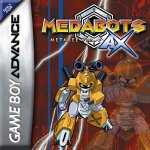 A Way To Win Easily If You Have The Medaparts!

A Way To Win Easily.!

In either version of the game, have your character use either the Red Tail or the Wanafly Legs. Jump in the air in any stage and tap Up(2) to fly across the level in a straight line. Press Down(2) go in a slight downward direction.

Whenever you lose a battle and you have to give up one of your Medaparts, hold A + B + Start + Select to reset the game, thus not registering your Medapart loss.

After finishing the tournament, face the Rubberobos. It takes skill and practice to defeat them, especially Seaslug. However, with the missile head, shoot accurately and it will be a one-hit kill. After defeating the Rubberobos, open your tournament prize for Arcbeetle, the Medabot Space Fighter X uses. The Prominence (head part attack) is only valid twice per battle. Although limited in number, it makes up in power.

During a Robattle, jump to a top corner and hold Down to charge your special. When full, press Select close to your opponent to do serious damage. Repeat if necessary.

After defeating everyone in the Medabot tournament, wait until the credits end. You will see someone robbing your trophy. After the short intermission, the Rubberobo Gang will can be challenged at the normal places you usually battle (Forest, Factory, etc.). Although you cannot defeat them completely, you can get Medaparts. After you beat all the challengers in the tournament, the Rubberobo Gang will steal your prize. You will then get to fight various Rubberobo members at all locations on the map. There are certain areas on the map that contain the four Rubberobo Captains (Squidguts, Gillgirl, Shrimplips, and Seaslug). You will fact them in that order. Seaslug uses the Ultimate Medabot, Mega-Emperor. Mega- Emperor is has extremely high firepower and armor. Make sure you have a very strong team.

Best Parts In The Game

When you defeat all of the challengers, a RubberRobo will come up and take the prize. You will have to defeat four of them to get your prize back. When you open it, a Arcbeetle medabot will be yours for keeps. ( I tell you when you use Promeinence, it will shoot out a entergetic blast of blue light in the Medabots TV show, but it only has two bullets you have to fire at your opponent!)

We have no cheats or codes for Medabots AX: Metabee Version (Red) yet. If you have any unlockables please submit them.

We have no unlockables for Medabots AX: Metabee Version (Red) yet. If you have any unlockables please submit them.

We have no easter eggs for Medabots AX: Metabee Version (Red) yet. If you have any unlockables please submit them.

We have no glitches for Medabots AX: Metabee Version (Red) yet. If you have any unlockables please submit them.