Use the above links or scroll down see all to the PlayStation 3 cheats we have available for Medal of Honor: Airborne. 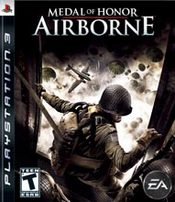 How To Deal With The Nazi Storm Elite

The nazi storm elite appear in the last two levels, are dressed in black, carry MG42's and are extremely tough. If not properly dealt with, they will quickly kill you. Your one advantage to them is that they move very slowly and cannot take cover, making them easy targets. Their toughness, however prevents you from killing them without their noticing. The best way to kill them all-around is to use many grenades, starting with gammon grenades. Two gammons at close range will dispatch them usually. It will take many frag and stick grenades to do the same job. The next best is the panzerschreck rocket launcher. It has about the same killing efficiency as a gammon grenade but can be used at long range. However, their horribly slow reload rate makes you extremely vulnerable when at very close range, which you will find yourself in at the very last part of the game. After rockets, the springfield is the next best weapon. However, you have the same situation as the panzerschreck, poor rate of fire. Then comes assault rifles like the Browning Automatic and the Sturmgewer 44. Then you have the m12 shotgun, and finally semiautomatic rifles. Do not attempt to kill a nazi storm elite with a submachine gun or a pistol; it just doesn't work without using 200 rounds. At long range, use snipers or rockets. At medium range, use whatever you want that isn't an SMG or a pistol. At very close range you are put in a very tight pickle. Start by expending gammon grenades if he isn't firing at you directly. If that fails, you can either break out an assault rifle or the shotgun. If you use the BAR, you take the risk of having to reload without killing him, so use the sturmgewer 44 instead because of its steady firing and better capacity. However, if you have the buckshot upgrade on the shotgun, have a clear shot, and have all eight shots in the shotgun, use that. It will generally prevent him from shooting you (if you don't stand still) and will knock him out rather quickly. The other benefit is hitting two of them with each shot, should that situation arise. The most important thing is to react, not to think. If you just stand there he'll get you every time. Good luck.

Alright, when you are jumping out of the airplane press R3 and you should kick [this comes in handy when you are going to land near enemies].

In the level operation market garden land on the church and make sure you have the sniper that spot is vantage point and you can repeat what jackson did in saving private ryan and watch out for the tank.

To steady your aim with the Springfield, or any other gun with a scope equipped, this is an effective trick to help you win the day. Go into Aim Mode. You will note the two crosshair halves on the left. Gently press the R2 button down until the two halves merge, then fire at your target. *Note: This process takes a while. Be wary of grenades thrown at you.

In single player, switch to your pistol. Tap R2 with two fingers one after the other. You'll fire significantly faster, this can only be done with a pistol.

The Shotgun first appears in Operation Avalanche near a system of catwalks which lead to the German Communications Center. Pick it up and use it to unlock it in the Weapon Selection Screen.

We have no easter eggs for Medal of Honor: Airborne yet. If you have any unlockables please submit them.

We have no glitches for Medal of Honor: Airborne yet. If you have any unlockables please submit them.

We have no achievements or trophies for Medal of Honor: Airborne yet. If you have any unlockables please submit them.

Submit a cheat for Medal of Honor: Airborne