Use the above links or scroll down see all to the GameCube cheats we have available for Megaman Network Transmission. 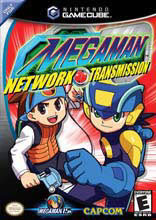 Get to level 100 and collect all Navis chips. Then, go to Den Area 3 to access the warp to the secret Boss.

Combine the following chips in order to create the corresponding Program Advance:

Have Roll, Vgun, Shotgun, and Cannons. First use Roll, then let him attack. Dodge it, then use any Shotgun, Vgun, or Cannons. When he attacks again, dodge it then attack. Do this rapidly to win and get the battle chip Gutspunch.

While on your way to the Zero Account, you will discover many tough enemies, including Gravity Man. This Navi can be very difficult to defeat. Make sure that you have at least a few Half Energy Subchips (useful when low on health). Also, make sure to have a lot of projectile weapons, such as Cannon, Hi Cannon, Shotgun, etc. When you begin to fight him, you will find that his main weapon are energy balls. To dodge these, jump up and down. You will switch between standing on the ceiling and ground. Then, when the time is correct, use a projectile weapon. If your health gets low, use a Half Energy.

Have Water attacks and plenty of Swords. First, weaken him with Aqua attacks. Next, use a Sword attack. The moment you use it, jump backwards and dodge his body flame. Do this rapidly and win the battle 2 by 4. First, destroy a lot of viruses in Lan's computer. Jack in and out several times until you have 3,000 Zenny. Go to Higsbie's store and buy at least two AquaSwrds (three recommended).

Have a lot of GuardInvis, HighGuard, ShldGuard, and Guard chips. He has a shield. In order to do damage, you must hit him after he does a attack. The Guard and related chips will turn his attacks in to shock waves and send them at him. He will not reflect them. Do this numerous amount of times to defeat Bright Man.

Before attempting this, have five Invisibility Level 3. Go to Battle Simulator at the park and get all the opponents' Navi chips, including Proto Man. You wll get an email from Mayl, telling you about an extremely powerful Navi that was spotted at Den Area 3. In order to battle, you must have several double jumps, five Color Man Navi chips, M Cannon (as well as other projectile weaponry), and all the armors. Go to the teleporter that leads from Den Area 3 to Global Area 1. Use multiple double jumps to go to the top right ledge. Pick up the Slasher on the way up. Enter the green teleporter when you are ready. A Navi in a cloak will appear and attack. Do not toy with him. If you have Color Man, use it immediately to get rid of his energy shield, which also determines his elemental attacks. He attacks mainly with Seeker Energy. When his shield is down from Color Man or the opposite element to his shield, attack with Projectile chips; regular and charged attacks have no effect. About a quarter of the way through his HP, the battle will end and you will receive the Bass Navi chip (Attack 60, MP 64, attacks all enemies on screen and destroys shields). He cannot be fought again.

If you wish to have more than just one Nav Chipi, go to the Net Battle Simulator. Battle any Navi you wish to have. However, in order to get that Navi you cannot use a Navi Chip in battle. You can only use regular Battle Chips and Restore Chips. Also, you must defeat the Navi quickly. This works best with Fire Man, Guts Man, Ice Man, and Color Man. It is difficult to get other chips because some of the Bosses take too long to defeat.

Go to Pharaoh Man's stage. Near the middle, there is a long hallway with rising spike platforms. Over one of them is a hole with a blue data diamond object and some money on the right. On the left is a ladder going up into a small room. For this trick to work, you must have full health. - Going up into this room with some health missing makes you fight a brown dog. He only gives you a Recov300. However, if you have full health you fight a purple/pink dog that will yield the battle chip called PopUp. Killing the pink puppy is the most difficult part of this trick. Stand in the middle at all times. Do not worry about using chips on it. All attacks do 1 damage. Wait for him to pop up and shoot him with a normal (B) shot. He will drop down and pop up somewhere else (and sometimes where he was before). Do not let him drop down without shooting him or you will have to start again. If you make a mistake, go down to the teleporter, go in, then come back and fight the pup all again. All in all, you have to shoot him a lot. PopUp allows you to stay invisible and invincible for a set amount of time. This is the key to the easy game. For example, if you set this chip to default and go to the Navis in the park, you can get an "S" rank instantly by not taking any damage in the battle (just charge and shoot).

Before battle with Zero, go to the Global Area 1 (where you must go to defeat the Bosses to get the pass codes underneath their warp points for their levels). When you get to Global Area 1, look towards the bottom left. You will see a giant yellow data there. Go there and get it. You will have to take the path under the green Navi that tells you that the Undernet is ahead. When you get the data, Mega Man will tell Lan that this data is hard to read. Lan will then send it to his dad for research. Advance with the story until you get to Zero. When you get to Zero and defeat him, there will be a lot of dialog. Lan's dad will appear, saying that the mystery data he sent him was a backup program for Zero, and that Zero does not have to be killed and can be turned to good. Finish everything, then the professor will appear and say that he has created a new life virus, and will soon hack into the world's networks, take over the missile computers, and kill everyone. Chaud and Lan will jack out. Read the e-mail you get, and Zero will give you his Z-Sabe. He will also give you his own Navi chip. Once you get it, it cannot be duplicated and you cannot fight him in the Net Battle Simulator. You can call him out, giving the enemy three good slashes and a lot of health taken away.

If you go into your Net Battle Simulator, do not battle using any Navi. Instead, use your regular Battle Chips, Restore Chips. and Mega Buster to win. This works best when your Attack and Charge are all powered up fully.

We have no cheats or codes for Megaman Network Transmission yet. If you have any unlockables please submit them.

We have no unlockables for Megaman Network Transmission yet. If you have any unlockables please submit them.

We have no easter eggs for Megaman Network Transmission yet. If you have any unlockables please submit them.

We have no glitches for Megaman Network Transmission yet. If you have any unlockables please submit them.

We have no guides or FAQs for Megaman Network Transmission yet. If you have any unlockables please submit them.