Use the above links or scroll down see all to the PlayStation cheats we have available for Megaman X6. 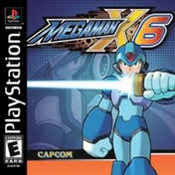 How To Get Across Spiny Area At Recycle Lab

You will know when Alia contacts you. First wait for the compressor 2 come down then start wall jumping on it. When the compressor is at the top use the dash performance to make it across.

If you are using X, be sure to use the blade armor equipped with the ultimate buster parts, stand in front of his front shield do the mach dash upward then slash him with your charged blade. After he is stunned, use either the Metal anchor or Ray Arrow weapons. Do the same technique when he fires his lightning ball attack. If you're using Zero, again stand in front of his shield, do the high jump then use the "Sentsuizan". You will land in front of him but you won't get damaged.

First, use charged X-Buster. Then use Giga Crush.

Complete the Blade Armor first. When it's completed, use the armor. To use the charged blade, you must charge your X-buster to the maximum. When you're completely charged, press the Up button & release the Shot button to execute the move. It is also advisable to use the Ultimate buster parts for X so that you can do the charged blade more easily, without holding the Shot button.

Find Zero with the teleporters and fight him. He will join you after he is defeated.

After getting Zero, go through the teleporters and find High Max with Zero. Make sure to have both Sub-tanks full before facing him. Use the Sharks weapon with Zero. Take your time facing him -- it takes awhile to figure out his attacks and how to get close to him.

Get near your enemy. Press square three times rather quickly. If controls have been changed, use whatever key triggers Slash.

Note: You do both of the codes for the Ultimate Armor X and Black Zero at the same time. To get Zero's Alternate Black Armor at the title screen press L1 three time then press R2 once once you get Zero as a playable character he will be in his Black armor.

To get the Ultimate armor for MegaMan X, at the title screen press Beft 3 times then right once. If done correctly you should hear a noise.

Here are the weapons for those Maverick investigators of Dr. Gate, as follows:

We have no unlockables for Megaman X6 yet. If you have any unlockables please submit them.

We have no easter eggs for Megaman X6 yet. If you have any unlockables please submit them.

We have no glitches for Megaman X6 yet. If you have any unlockables please submit them.

Submit a cheat for Megaman X6