Use the above links or scroll down see all to the PlayStation 2 cheats we have available for Mercenaries 2: World in Flames. 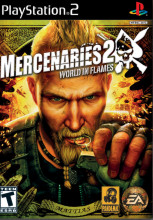 Where To Find A Street Racer

Go to Merida in a helicopter, that's how I found my 5 street racers. It's unknown if it spawns there without being in a heli.

How To Hijack an Allied Minister

Frist go to the guerrillas camp and find the guy with a prototype rifle and git max ammo for the gun and and then go catch a bounty and kill all soldiers around the area and the shoot a the heli till it turns hostle and don't use the scope becase they will shoot at you and thorw off your aim so try to get some where high and shoot the gunners and then go hijack the heli and use the fraction cheat to restore your trust.

All of you know El Diablo right? The big monster truck Eva creates. Right, that one. Want it? I will let you know how to get it. First, make El Diablo. When you're delivering it, cancel the mission. But before you do, get in the truck. Exit it, then accept the contract again. Build another one, deliver it, then you should be at your mansion. Go back to where you left the original truck and it'll be there. Please note that you can only have 1. If you build another one, it'll just disappear.

The first one wasn't correct, here is the real status.
VZ: hate every faction
AN: hate the VZ, Chinese, and like every other faction, Pirates
PLAV: I think all, I'm still figuring it out
Chinese: the VZ, UP, Pirates, and AN
UP: VZ, Chinese, PLAV, and Pirates
Pirates: No known alliance!
( UP and AN are English, if you did the three missions for General Peng, you'd know why)!

Have you've ever been wondering if cars can do something exciting? Well, there are some thing s you can do (Use the Health cheat). Use a VZ truck and drive into a pole, it may not work, but it might do a back flip. And take any car, besides a tank or El Diablo, and go through the entrance of home base.

At the place where you find the mechanic (where you have to build El Diablo) in the back, there is a bunch of box's, behind the box's, in the far right, is a crate, and in it are a few heath packs.

How To Get A Prototype Rifle

Go to the guerrillas HQ and find the guys standing next to the turrents and kill them and still one of there rides and get out of there before you die.

In the mission were you have to go to that bad guys hideout (i forget his name)and you use a Bunker Buster to try to brake open the big metal doors but then it doesn't open the doors so you have to go back to Home Base but then Home Base gets attacked by Carmona and his men and you have to race back to Home Base under a time limit. Well when you get back to Home Base there is going to be a'lot of VZ troops with VZ cars, VZ tanks and even VZ SAMs and they're are going to be aimed at you (well not the SAMs, of course). So if your running low on health, on the left side of the front door there is a crate. If you bash that crate theres like 7 health packs.

First you will need a ribera gunship (venezuelen) and you will also need a lot room in front of you. Find a tank you want to air lift (again make sure you have a lot of room in front of you) hold x and forward otherwise it wont work. Once you are in the air don't let go of x and try not to make sharp turns so you don't lose control of the helicopter.

This can be found on the mission where you go after blanco (as soon as you get on the rig) or when you find general pena (it does regenerate even after you capture him).

Dont Get Killed By Your Allies

press and hold R1, X, and square to do a burn out

Here are some info on the factions. Venezuelans - hate every faction, cannot be allied with UP (Petroleum)- Hate Guerrillas and Venezuelans (Worth allying with). Chinese - Only hate Venezuelans that I know of (probably a good ally). Guerrillas (PLA) - Hate UP and Venezuelans, other hatreds unknown (good to have as an ally but not important). Allies (USA) - Hate Venezuelans and possibly UP (Great allies, once they show up they are EVERYWHERE). Pirates - Not worth going near unless needed.

If your in a helicopter and you come across AA it will appear as a dark red dot on the map. When the dot starts blinking you have several blinks before either it shoots, or you get far enough away to no longer be seen as a threat. The higher you are(375ft is max) and the faster your going will help to outrun the missile. If your basically right on top of the dot on the minimap chances of outrunning it are pretty much impossible although it is possible to dodge it by descending/ascending quickly in certain directions. If your far enough away its possible to outrun it if you keep going, either way I'd suggest using the life cheat or going around it and if they fire just run straight away and you can outrun it normally.

When doing the mission Beijing Cocktail it helps if you have a helicopter. Any fast speed gives you adrenaline boosts and in a helicopter that is pretty much the only speed there is. It also helps even more if you have the life cheat on because of enemy anti-air.

When you are in a battle with enemies and allies both, be careful not to shoot your allies even on accident, if so it will make all of that faction of allies turn on you until you are once again out of sight. If you're still allies, the next time you come upon this faction they will once again be friendly.

If your using vehicles other than civilian type, any faction except the owner of your current vehicle will be obliged to shoot at you even if they're friendly. No two factions are allies in this game. While disguised as someone they will know no different until you exit the vehicle.

Where To Find An Affinity

To find this car, goto Caracas and look around. You'll probably see RTRs and Gypsys just keep looking. It looks similar to a Bentley or a BMW.

Go to the PDA's faction status screen and enter the following on the Dpad: Right, Down, Left, Up, Up, Left, Down, Right. A soft click should confirm the code's activation.

Go to your factions screen in your PDA and press up, down, left, right, down, up, right, left.

Go to the PDA's faction status screen and enter the following on the Dpad: Up, Up, Up, Up, Down, Down, Right, Left. You should hear a sound to confirm the code is correct.

If you never want to die, go to the Factions screen and type in this code. Up, down, up, down, left, right, left, right. [same code as Mercenaries 1] If entered correctly, you will hear a click. If doing contracts or a job you may have to re-enter code.

We have no unlockables for Mercenaries 2: World in Flames yet. If you have any unlockables please submit them.

We have no easter eggs for Mercenaries 2: World in Flames yet. If you have any unlockables please submit them.

Get two other soldiers from Universal Petroleum in any car or military vehicle (not a tank or Heli) and go to a medium sized destroyable bridge (metal and Concrete). Place a C4 and throw it on the very right of a bridge. Go back to the car and let the soldiers out of the car then blow up the bridge and the gun-man that got out will be bent back and his neck will twist around. (I don't know how long though).

We have no guides or FAQs for Mercenaries 2: World in Flames yet. If you have any unlockables please submit them.

Submit a cheat for Mercenaries 2: World in Flames