Use the above links or scroll down see all to the PlayStation 2 cheats we have available for Metal Gear Solid 2: Substance. 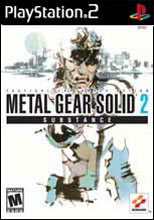 When you see a fire, equip a Cardboard box and walk into the fire. Not only will Snake or Raiden burn, but your cardboard box will be destroyed.

This tip is a beginner tip. After defeating Fatman, as shown in the FMV, he activates the biggest bomb in the Big Shell. You have a little over a minute to find the bomb and if the timer reaches 0, the Big Shell will collapse and the mission fails. If you don't know where it is, this tip will help you. If you equip Sensor A, the area shown is around Fatman and around some of those things I like to call "crates". If you equip Sensor B, it doesn't do anything. Notice that if you get around Fatman, you hear a pulsing sound. That means the bomb must be nearby. More specifically, it's under Fatman. Drag Fatman out of the way and defuse the bomb using the Coolant Spray.

Just shoot out his upper or lower legs with stingers and shoot the targets inside with an M4 or a PSG1. For Snake Tales version, Take Out upper legs, head lower left arm, and rifle(rifle target is a little high.)

To impale a guard you have to be Raiden or Ninja Raiden stands next to a guard with your H.F. blade and it does not matter if its blunt blade or not. Press R3 and now you have impaled one of them.

Use this trick to collect dog tags from nearly all guards. The only drawback is that it may take some time, depending on where you are in the mission; knocking out all other nearby guards before starting and targeting reporting guards last is recommended. If you cannot get close enough to a guard to demand his dog tags without being spotted, begin by tranquilizing him from a distance. Run to where he falls. Pick him up from the shoulders to make sure he is facing up. Position yourself so that you are standing in line with his head (but not literally on top of him). Also, make sure that when he stands up there is enough room in front of him that you can run around and demand his dog tags. When he starts to get up, equip you M9. The moment he reaches a standing position, hold him up. The guard will not have time to turn around and see your character. To wake up guards faster, use either the Coolant Spray technique outlined elsewhere or prop the guard against a wall (feet first, preferably), enter first person view, and punch at the highest part of his body. Both ways will get them up faster, but make sure you are in a good position to hold them up in case they wake up faster than expected. This technique also works well to salvage failed attempts (i.e. you were spotted, panicked, and tranquilized him, which is a good reason never to have your USP or Socom equipped when first holding someone up as you do not risk panicking and killing the guard by accident.)

Save Time In VR Missions

When you are using Ninja and HF Blade, do a vertical slash and hold the Right Analog-stick in position and do not allow it to re-center. This puts your sword in a samurai stance, or Raiden will hold it up. When in this stance, you can completely run on stairs, instead of slowly tiptoeing up, which saves a little bit of time.

Note* This only works in the Plat Chapter. When you are covering E.E. with the sniper rifle, shot a lot of birds. They will contact you on the CODEC. The next time you try to save, Rose will get mad at you.

When playing through Raiden's variety VR missions and you reach Gurlugon, hide behind the tall box on the left closest to Gurlugon. When the box is destroyed, a magazine appears. Gurlugon will go crazy and ends up killing himself. This counts as a success in the VR mission.

Equip a ration icon. When your life reaches zero, the ration will automatically restore part of your life so you do not have to.

When playing in the tanker level, press square on a guard and trip him so he hits the next guard, witch makes a very funny domino effect.

Use a memory card with a completed saved game file from The Document Of Metal Gear Solid 2 to start the game with all bonuses unlocked.

Use only stun weapons throughout the game as kills will ultimately lower your overall score. Bosses such as Harrier and the Rays can’t be beaten with stuns to you will have to use lethal weapons. Some weapons that you can use to stun include: M9 pistol; PSG1-T sniper rifle;Fists; H/F Blade (press Square to switch to the blunt non-lethal edge, again to switch to the sharp killing edge), and stun grenades.

When deactivating the "Baby C4 bombs", the last one for the very easy and easy difficulty settings is under the submarine hanging from the ceiling in the bottom of Strut A Shell 1, where you started out as Raiden. The one on the hard difficulty settings always move around the room, usually in the caged area under the stairs or behind the computer controls.

To knock out an enemy's radio easily, when you hold them up shoot it (on the belt to the right of their back). Also shoot an enemy's radio when they are knocked out to prevent them from calling for help if they wake up.

When a patrolling guard sees you, run into a room where the screen goes black and tells you where you are. The game will not go into alert mode, evasion mode, or caution mode.

Immediately when you enter the engine room, there is a small Vulcan Raven figure standing on the ground with a flashlight shining on it. If you shoot it, it will start shooting very small balls around and will repeatedly say "Raven!", or something similar.

In the Holds 2 room, go all the way to the left to find a hatch. Open it, and you will climb down into a small area. Crouch and go through the vent on the ground. You will eventually see a gun clip fall through and a man will start talking. His shadow will be on the ground. Wait there until his shadow leaves, then move through the area. After you get past that, you will reach an opening and an intermission sequence will begin. After it ends, crawl through a vent on the right side of the small room. After you crawl through, you will find a ladder. Climb up the ladder, and it will lead you to a small perch. Look down at the bottom of Metal Gear RAY, and you will see Ocelot standing there. He will then go away. You can keep doing this and experiment with things to do with Ocelot.

After completing the game once and saving it, start a new game with the saved data. On the Navigation Deck after the battle with Olga, go up the ladder to where you would normally get the Thermal Goggles. On the middle platform, before the goggles, should be a USP Suppresser on the left. You can now equip the USP with it and muzzle the gunfire for the rest of the Tanker chapter.

You can make the Marines in the Tanker chapter appear in their underwear in the room where Metal Gear is being held. Press L2 two or three times when start at the title screen then select the normal difficulty setting. When you get to where you have to take pictures of Metal Gear, the nearby marines will not be wearing their pants.

Successfully complete a Snake Tale to unlock the M9. Begin game, play and use M9 to stun the Bosses instead of killing them to view an alternate ending sequence.

Successfully complete 100% of the VR missions as Pliskin.

Successfully complete 50% of the VR missions as Snake.

Successfully complete 100% of the VR missions as Raiden and Ninja Raiden.

Successfully complete 50% of the VR missions as Raiden to unlock Ninja Raiden in the VR Missions.

Successfully complete the game under the normal difficulty setting.

After completing the game two times, Snake and Raiden will be wearing sunglasses.

Successfully complete the game. The digital camera will be available when a new game is started. The digital camera is located in Strut E Shell 1. Go to the bottom of the screen and locate the platform with three red lights on it. Climb up onto it and equip the Z.O.E. Box. When the conveyor stops, press Action to climb on. You will be taken to another room. Press Action again to get off and retrieve the Digital Camera. Exit the room the same way you got in.

Much like the Codec transmissions, you can press L1 or R1 to zoom in during an intermission. The harder you press, the more the zoom. You will hear a gunshot. While holding the button, use the Right Analog-stick to move the view. Also during certain parts of some intermissions are sections where it looks like you are viewing the scene through a camera or binoculars. You can use the zoom feature with these as well, and the onscreen distance or zoom indicators will increase realistically the more you zoom in. This also can be done at the beginning of the game, before pressing Start.

Press the L1 or R1 to move the faces. Press L1 for a negative response such as "No way" or "Why don't you do it?". Press R1 for positive responses. The responses change depending on who you are talking to.

We have no unlockables for Metal Gear Solid 2: Substance yet. If you have any unlockables please submit them.

We have no easter eggs for Metal Gear Solid 2: Substance yet. If you have any unlockables please submit them.

We have no glitches for Metal Gear Solid 2: Substance yet. If you have any unlockables please submit them.