Use the above links or scroll down see all to the PlayStation 2 cheats we have available for Metal Gear Solid 3: Subsistence. 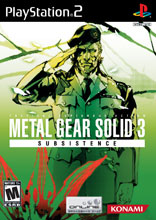 There are 64 Green FROGs in the game you can't eat them but if you shoot them all you will get the steath camo it will be in your itmes.

After you are captured and sent to jail do not remove the tracker Ocelot puts into you. Because when you meet up with Eva she will take it out in a funny way.

The End seems to be a very tough boss right. . . WRONG!!! When I first killed the End in duel mode, I killed him in 5-6 minutes on normal. When you barely start I know where he is. Go up the hill north but keep your eyes on the NorthWest. He is on the hill hiding in the grass. If you look near him with a sniper rifle, his head is shining.Blast 2-3 shots at him before he finds you. As soon as you see him, about a second later he finds you. The camo I always use is Woodland, Flecktran. After you shoot him, he stands up and runs away. After the first time you shoot him in the beginning, head to Sokrovenno North. He is on the right, hiding near the SouthEast. At this point, the entire battle is yours! Whether you were able to shoot him there or not the game is still yours. What's that? Wanna know how, 'ight. If you can, sneak toward the east and go up a hill if the end hasn't seen you yet. Whether or not he has, keep listening. If he hasn't, seen you sneak around the hill where he is hiding. Keep going to your right very quietly (no running). As soon as you see him, use the D-Pad. Go up to him and hold him up with the M37. He will drop his weapon and probaly say "How did you. . .?!" Shoot near him and he'll say "I have this" and give you the Moss Camo. Then blast him 1-2. After that he uses a Stun Grenade. But still, the game is yours. If you have the Flecktran camo on, equip the thermal goggles. W/ them on. you can see the End's footprints. Follow them and once you see the End, sneak, don't run. Blast him again, and again, and again to kill him. If you kill him with the MK22 or EZ gun, You will find the Mosin Nagant after the vid where he blows up. If you are playing Subsistence, and not Persistence, then if you press U,U,D,D,L,R,L,R,S,T while on the map, the End's location will appear. But just remember who's the master at taking out the End, ME!!!

Whenever you see a R1 icon at the top right corner of the screen press and hold R1 and you will see through Snakes eyes.

In the last battle with the boss go by all the logs. There will be a snake on the ground by the log. They are Snake Solid, Snake Liquid, and Snake Solidus. Eat them, because they are delicious.

After the second time in Grozny Grad go to the locker where you stole the mans clothes and put him in. Open the locker to find a special sneaking camo. It is just like The Bosses except black.

Skip The Battle With The End

As soon as you get out of the cave after the battle with ocelot go straight until you get to the water. Go forward but when you get to the end of the water walk toward the left to go to a different area. Shoot the people and go inside the little building. Grab the sniper rifle and leave. Then go the other way. Wait until the movie is over. Then equip your sniper rifle and zoom in on The Ends head. If you shoot him in the head he will die. But you must shoot him quickly or he will leave.

After the movie plays of the shagohod falling off the bridge you will have to face it again. To defeat it easily take out your rocket launcher. Shoot the wheels of it then shoot the back with the big dent in it. It will do a lot of damage to it. Repeat this process until it is beaten.

While in Grozny Grad prison before escape save the game and shut it off. Then when you play the game again you will be a whole different person fighting zombies. Keep killing them to wake up.

Play Around With The Music Video

During the music video "Snake Eater", pressing different buttons will slightly change what appears on screen.

Messin With The Title Screen

You can mess with the title screen by pressing buttons!

We have no cheats or codes for Metal Gear Solid 3: Subsistence yet. If you have any unlockables please submit them.

We have no easter eggs for Metal Gear Solid 3: Subsistence yet. If you have any unlockables please submit them.

We have no glitches for Metal Gear Solid 3: Subsistence yet. If you have any unlockables please submit them.