Use the above links or scroll down see all to the Game Boy Advance cheats we have available for Metroid Fusion. 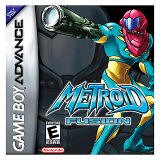 To get the plasma beam you must defeat the plant monster and the core-x and then your beam will pierce your enemies.

Get New Suit At End

When you beat SA-X before at the end, you will see a big monster. SA-X returns and he will give you the new suit! But it is blue ball floating in the air!

This is at the very end. To beat it you must let it hit you then you will be paralyzed for a short time. Then a core X will appear, it's the SA-X! He will help you for a while then get slashed and die. Then absorb the SA-X core. You will get full healt and weapons. Use your beam by aiming at his stomach, right before he slashes you, run then shoot the stomach again. Repeat this till he finally dies. Board your ship when it appears. And you win!

You need speed booster to do this. While you are running with speed booster, press down before you stop running. If you do that correctly, you should still be glowing as if you were still running with speed booster. Now, jump. While you are in the air, press a directional key (I'm not sure if pressing down will work). If you did it correctly, you should dash all the way in the direction you press until you hit a wall, hatch or a passage that requires another method of getting through (bomb, power bomb, missiles, etc.) There are a few places in the game where you have to go straight up in a narrow space. You would have to speed rush up instead of jumping while using speed booster.

To kill most monsters in one blow, run into them with your speed-booster ability (once you get it.)

The Easiest way to beat Serris is to go to the very right of the room, go to the top of the ladder and shoot fro there. That way Serris can't touch you, and you have an easy way to shoot him!

If you get an abilitie that can be used back further in the game go ahead and go back to where it can be used and use it. That way if there is something important there you can get it

Bomb every suspicious place you see. Once you get screw attack, try sommersaulting toward walls. Sometimes you can discover a secret passageway. Don't be afraid to use powerbombs in seemingly empty rooms, because you just might bomb up a passageway.

You will need speed booster and space jump to do this. Gather up your speed, then do space jumps continually. Do not touch the ground or go backwards. Note:You need some practice to be able to do this. Also: You cannot jump into a wall.

While fighting the SA-X you should already know that your wave beam goes through walls, right? If the SA-X is under you near the hatch, which you will need to be fast to do, you can shoot at least one good hit through the floor. NOTE: It won't shoot back, it will try to screw attack up to you.

When dueling the SA-X in the last battle, a lot of people think missles won't work, they do! Not for hurting it, but they freeze its but giving you time to charge that beam and blast it!

So, you beat the SA-X and Omega Metroid and thought you were doing great until you received a lousy little number on your percent completed. When you finish the game, a metroid appears next to your file on the select file screen. This means that on your pause menu, you will find a list showing how many of the possible 20 energy tanks, 48 missile expansions, and 32 power bomb expansions you found. (it adds up to 100 items,1 item= 1%!) That's not all. Under the spot on the pause menu where you see what section you're in (the one at the top in center in writing, not the map)there will be three possible icons, a box with a picture of an expansion and a checkmark. This means you found all of that expansion there is in that area. Don't see it. Then you better get to work and find them.

As you realized the SA-X has all of samus's best abilities. Such as the Screw Attack, Space Jump, Morph Ball, Power Bomb, Varia Suit, Mega Missle, The ICE BEAM, and the Hi-Jump. And eventually in the game you get wind of their being no more than 10 SA-X aboard the station! That's why he appears all over the place.

Besides the Ice Beam, this is the strongest weapon. You must win the rematch fight with the Rogue Security Robot and the Beam Core-X afterwards. This is needed to get into the Restricted Laboratory. It takes nearly 50 missles to beat the B.O.X security robot. The B.O.X is the code named Rogue Security Robot.

You must defeat Serris. Then the Core X afterwards… Then clear a straight line in a long room and… You know what's next… LET IT RIP. At ultra-sonic speed it's Samus tearing down the room. AND... she wins!!!

This is it. The complete package. When this is gotten you can kill any enemy (except bosses) in just one hit. It is combined with the space jump so if the space jump is mastered you will never worry about enemies again. You must defeat the Ultra-Powerful Ridley and the core-X afterwards.

To get Space Jump you must beat Yakuza and then the core X afterwards. It takes practice to master so use it in an enemy-less room. Best used in the room you get it in.

This is impossible to get during the normal game downloads. In order to get the Ice Beam you must defeat the SA-X and the ugly form after it then the Blue Beam core X. Then during the fight with the Omega Metroid the SA-X helps, gets killed then transforms into the blue X grab it and LET IT RIP. Take your wrath out on the Omega Metroid for revenge on the Helpful SA-X.

Once you get the ultra speed regained, go in a big area to catch your speed and then push down once you have it. Then jump and push forward or backward and Samus will fly in the direction you push.

In Metroid Fusion there are 5 different endings depending on your time and percent you have when you beat the game. Below are listed the endings.

Hold Your Gun Out And Run

While running take a shot. If you stop you will have to repeat this.

Turning Into A Ball

To turn into a ball, press down on the control pad twice. To lay bombs, press B. To jump, you can either get hit by the bomb or you can press A.

We have no cheats or codes for Metroid Fusion yet. If you have any unlockables please submit them.

We have no unlockables for Metroid Fusion yet. If you have any unlockables please submit them.

We have no easter eggs for Metroid Fusion yet. If you have any unlockables please submit them.

We have no glitches for Metroid Fusion yet. If you have any unlockables please submit them.

Beat the SA-X for the Final Time

Created by: goku the saiyan master. Read the full guide...

Submit a cheat for Metroid Fusion