Use the above links or scroll down see all to the GameCube cheats we have available for Metroid Prime 2: Echoes. 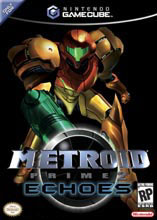 This boss is very simple. First get to the center of the room and defeat Alpha Sandigger by shooting his head off. Then he will turn into bomb guardian. This is all you have to do. Shoot the end of him that is glowing pink with the charge beam. After you damage him, he will spit purple mist stuff out of his mouth, shoot it with a missle. Repeat this process till he goes down.

This guy is easy, but annoying. First of all shoot him with everything you have. When he starts to glow, he will jump and you damage him. When he lands, shoot him with everything. When he jumps down at you after that, jump over his shock wave. If he starts shooting light beams at you, hide behind the crystal. As the battle goes on, he will get faster. You can sneak a missile in at times but you mostly can just fire power beams at him. Do all this till he goes down. Note- If your low on missiles, shoot the pods.

This fight can be a little bit hard. First of all, its a battle of Dark Samus firing attacks and returning the favor with a missile. After you wear her down, she will get a new attack. She will jump in the air and throw herself at you. After she does this attack and her shield goes down, shoot her with a charge beam. Missiles DO NOT work in this part of battle because she has a shield for them. Note- if you have a hard time dodging the that attack, hide behind the center pillar(she cant destroy it)

Suscessfully complete the game under the normal difficulty setting.

When you enter the dark temple, you should see a cocoon. Shoot the support to make it fall in the poison. Chykka Larva (scan) will arise. Shoot him with charge shot when he jumps out of the poison. Double jump to avoid his poison wave and his splash. He'll swim around you and make dark shredders (scan) come up. Beat them for ammo. When he rises up a little, hit him with a charge shot. When he gets on the platform and tries to grab you with his tongue, dodge and hit him in the face with charge shots. If he grabs you, quickly use a super missile, or dark burst if you have it (I did). This form has a ton of health so restock ammo with dark shredders. Then, he'll become Chykka Adult (scan). He'll try to shoot you with poison and ram you so dodge. Shoot him until he's stunned, then look where he's facing and grapple to the platform behind him. Shoot the weakspot on his wings with a super missile. Do all 4 wings. Next, he'll become Dark Chykka Adult (scan). All it can do is release Chykklings (scan), which is actually bad. Beat them for ammo. Shoot his eggsack to do damage. You don't need to attack his wings. He may go back to regular Chykka Adult so read his little lable under his health every so often if you can't tell the difference.

How To Defeat Jump Guardian Easily

When he is about to jump, charge your beam. The second it lands, release your beam. Then keep tapping "A" repeatedly. Do this pattern more than once and soon you'll defeat him.

When fighting the dark GF troopers, just hit them with a charged beam or a missle.

Powering Up The Turret

This is acculy done in Shooting Gallery in Multiplayer. Have a 3 or 4-player game. When someones in the turret, press X then you'll transform. Go into that hole behind the turret. You'll be stuck there until the Samus Aran gets the heck out. When your in the hole, the turret will do 1 shot kills. If that Samus Aran doesn't move, or make the turret shoot, the turret will blow up, and i pressed certin buttons for the Samus to die and for me to get 3 points. Watch on the player's screen thats in the turret, and see if it does 1 shot kills. Oh, and i almoust forgot, when your stuck in the hole, you might be able to damage it the A button. You get 8 points if you can blow up the turret with Bombs in Morph Ball.

When you actually get to the Spider Guardian(I forget which room but it's in the Sancuary fortress), scan him (you'll see him spinning in front of you from right to left (or is it vise versa). So anyway, you will have to fight him in three different stages(entirely in morph ball mode). First off, he will be seen spinning from left to right with a blue magnetic shield of some sort. DO NOT HIT THAT SHIELD. If you do, you'll lose about 30 units of life(pretty annoying huh). Instead, ball jump up to the top level where he is found spinning, and to on to the left side. But first off, get in his way and lay two bombs undereath yourself(one for him to his, and one for you to bomb jump. If he hits your ball, he will be stunned and you will automatically get to go near him. Get to him and lay about three bombs in a row on him. It will show a cutscene showing that your've activated a bomb slot. Get to this bomb slot as fast as you can and bomb it. If you don't get there fast enough, you'll have to stun him yet again to be able to damage him. Do the same thing on the second stage, except you now have to use the half-pipe. I suggest going up to the top left or right of the place by boosting up the half-pipe, then come down bombing bombs as he approaches your area. Do this about three-four times and reach the bomb slot, then bomb away. Next and last stage looks hard, but not at all. He is found only spinning on one level (Spider Guardian), but what the trick is, you have to bomb three bomb slots now before time runs short. First stun him by waiting for him to come your way, and then lay a bomb in his way. When it stuns him(IF it stuns him), then go up to him and lay three more bombs, activating all three bomb slots. First go to the bottom one, then go to the middle one, then go to the last, top one. The reason for this is, is to set a path for him, so he can get sucked into hitting that energy shocking thing, and destroying him.

On the last boss, in the first phase(eyeball), it's kind of hard to shoot the tentacles to make them all retract. When you have a chance(best, when timed right, when boss is swinging tentacles around), get into morph ball and lay a power bomb. If you timed it right, that should take out most of the tentacles. The ones left shouldn't be too hard to shoot, because usually there are only one or two left.

Fully-charge up your Dark Beam and shoot them. Then fire a missile. This also works on almost every enemy (besides bosses) in the game.

Beat the game on Normal Mode.

Get 75% of items in the game, and you'll see Samus outside of her suit after beating the final boss. Get 100% of items, and see a special ending with Dark Samus.

The Boost Guardian is probably the hardest guardian in the game. It's better if you have 4-6 Energy Tanks. I beat him with 3 Energy Tanks but that's after dying 7 times. All it takes are these simple steps. 1) Fully-charge up your Light Beam and shoot him. Super Missiles work well. 2) Shoot him until he starts to charge up the Boost ball. 3) Here's the tricky part since he moves so fast. DO NOT TURN INTO THE MORPH BALL YET. When he comes after you DOUBLE-JUMP over him. He will then bounce harmlessly off the wall. 4) When he turns into the pinkish goo(shoot any Inglets as well) turn into the Morph Ball and start laying bombs in his path. 5) When he rematerializes repeat.

Be Stanley Cup Instead Of Morph Ball

Use your x-ray scanner on the south wall in the hatching room about halfway through the first level. You should find a hockey stick shaped symbol near the center of the wall. Shoot it exactly 57 times. Then try to transform into a morph ball but you will be turned into the stanley cup instead.

We have no cheats or codes for Metroid Prime 2: Echoes yet. If you have any unlockables please submit them.

We have no unlockables for Metroid Prime 2: Echoes yet. If you have any unlockables please submit them.

We have no easter eggs for Metroid Prime 2: Echoes yet. If you have any unlockables please submit them.

We have no glitches for Metroid Prime 2: Echoes yet. If you have any unlockables please submit them.