Use the above links or scroll down see all to the Nintendo DS cheats we have available for Metroid Prime: Hunters. 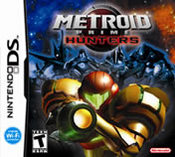 To beat the very first boss you must shoot all the blue spheres, then shoot the cube and then repeat these same tricks until the boss dies.

If you want to go battle gorea phase 2 first battle gorea phase 1 BUT DONT KILL HIM! You will see around the arena colored circles. You will need all the weapons for this. Fire the circles with the same colored weapon and when you shoot them all you will hear a little song and then your ship will send you a message that you probably wont understand but it tells you that you can battle gorea phase 2. And don't forget to kill gorea.

After you get the Magmaul from Alinos, go to Arcterra. Go to the Sic Transit in Arcterra of course and you may have to fight a hunter. (Trace, Sylux, Noxus, or even a guardian) After you destroy hunter; guardian, whatever. From the entrance you came from, go up, then left, and you'll see an orange door. Use Magmaul on it and you should end up at Fault Line. Destroy all the Quatroids and the wall will get out of your way. Pass the wall and you'll end up in a medium- sized arena(Sort of...)and you'll have to fight an Ice Beast thing.(I think it was called Ice Spawn or something)You can use any weapon on this monster except Judicator because the Judicator is Ice type hence the monster; the monster is invulnerable to Judicator. The best weapon to use on this monster is Magmaul because it takes more damage on it better than your other weapons. When you destroy the monster, the Imperialist will show up near the door on the left from where you came to fight the monster. Get it and you have it.

To do the Shadow Freeze, point downward with a charged Judicator. With an aim downward but POINTING AT YOUR BATTLE OPPONENT, fire. From any range you will freeze your opponent. This "glitch" is only done with Noxus and with a UA ammunition higher than 5.

If you are constantly ambushed by trace's alt form, Triskelion, Just look at the bottom screen for a red dot when taking corners. Most players ignore the radar fact then complain when They get killed by a cloaked alt form.

Sylux's weapon, the Shock Coil can take away energy from your opponents using little aim and long distance. Sylux's alt form, lockjaw can create a wire of electricity and if an opponent trips over it, they'll lose energy.

Trace's weapon, the Imperialist is very powerful and can go very long distance. You can use Trace's scope for better aim. When Trace stands still he will become invisible and can attack without being seen like a sniper. Trace's alt form, Triskelion charges at an opponent and can take out around 50 energy.

Noxus's weapon, the Judicator if charged enough, it can freeze your opponent solid and you can attack them without getting attacked back for a few seconds. Noxus's alt form, Vhoscythe can slice an opponent with one kick.

Weavel's alt form, Halfturret will separate Weavel in two parts. The lower half will automatically attack other opponents with Weavel's weapon, the Battlehammer. The upper half will be controlled by you and can walk around and kick opponents.

Spire's weapon, Magmaul if charged enough, it can set opponents on fire and will constantly take energy for seconds. Spire's alt form, Dilanche can climb up walls. Spire is the only hunter that is not damaged when in lava.

Kanden's weapon, the Volt Driver if charged enough, it can distort the vision of your opponents and will make it hard for them to attack or get away. Kanden's alt form, the Stinglarva can move fast and its detatchable tail will track an opponent and attack.

Samus's alt form, the Morph Ball can move fast and can lay bombs three at a time.

When you pass the force curtain inside Council Chamber a Fire Spawn will appear. Circle to the other side of the lava pool and then fight the enemy with the Judicator. After you defeat the Fire Spawn claim the Magmaul in the center of the room.

Get All Hunters In A Snap

This way easier then getting them from 1P. Go on Wi-Fi and choose Match My Ranking on Worldwide. Get 1 or 2 people then if they have a hunter you dont have, kill them and win. Don't camp, or else they will quit, or you'll get disconnected.

Get a 100% game completion in each file.

Getting All The Bounty Hunters

If you dont have all the bounty hunters, they are easy to get. You just have to beat the guy and you will get him.

Getting The Volt Driver

First, go to Celestial Archives. Then to Data Shrine 2. (use the battlehammer to open the green doors) This one is very easy to get, all you have to do is go up to one of the ledges with the yellow force feild the sise of your morph ball. I'm sure you know what to do here. The Volt Driver is on of my favorite weapons, next to the Shock Coil. It can fire as fast as the power beam, if you can tap the L button that fast. It's charge attack moves slow, but does lots of damage. The Volt driver can break yellow force feilds, and open yellow doors.

First, go to Arcterra. Now, go to the Ice Hive. Go up the icy slope, accross the bridge, where the zoomer is, and to the half moon looking thing, and scan it. Your objective is clear, turn into the morph ball, and navigate the path. this is harder than it looks, so it might take a while. The Judicator fires shots of super-cooled plasma, and it fires 3 shots simutainiously when you charge this weapon.

First, go to Vespe Defence Outpost. Then, Go to the Cortex CPU. Follow the path until you get to the elevator thing. Ride it up, then go to the left, until you find the jump pad. Go on it, you will be shot up to another hole by a series of jump pads. After that, it is pretty much straight-forward. Follow the tube to another room where you find the battlehammer. This wepon has no charge attack, but it's rapid fire attack makes up for it. The battlehammer can break green force feilds, and can open green doors.

How To Beat The Green Samus Easily

This took me a week so this is how to do it: You need the whole square line full (it can be like no 3 or 2 spaces not full) and use Power Beam first. Shoot her with power beam 11 times, then use missles, she will die in a matter of seconds.

When playing this game make sure if you are challenging people wirelessly that you are within the recommended distace. Since metriod prime hunters is such a big game the frequency cannot exceed large distances so its best to remain stationary when playing otherwise you could experience time lapses and you DS could freeze up.

How To Turn Around

This took me a while to figure out. You have to use the touchscreen. First touch where you are and then circle the stylis around.

To jump, just tap the touch screen a couple of times.

Successfully complete all of the training courses and get at least fifth place on the leader board on all the training courses. Once you complete the last one, the "Play Video" option will be unlocked on the touch screen. Touch it to se a short video of Samus discovering some enemies followed by a URL, www.metroidhunters.com. After you watch it once, you can watch it again by touching a small red dot at the bottom right of the main screen.

At main title on the screen press Up, Up, Up, Down, Down, Up, Down, Start and you will hear a sound.

At the main title of the game press X, X, Y, Y, R, L, R, L, Start a screen will appear on the screen saying you have infinite lives.

Do A Spinning Fireball

Beat the game 30 times on easy and use the spinning and it will turn into fire.

How To Beat Red Samous

Keep using the red chip you will unlock this after you beat the game on medium ten times.

We have no easter eggs for Metroid Prime: Hunters yet. If you have any unlockables please submit them.

We have no glitches for Metroid Prime: Hunters yet. If you have any unlockables please submit them.

How to get Weapons (all)

Hunters and their recommended levels.