Use the above links or scroll down see all to the Xbox cheats we have available for Mortal Kombat: Shaolin Monks. 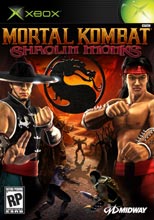 NOTE: You will need the Wall Jump to do this. In the Wasteland level, grab a sword. Climb up the wall and find the little niche by the bridge. Wall jump up the niche and slice the body of walls. Go forward for a glorified game of Donkey Kong. At the top, a cutscene will trigger which you save a guy. The guy happens to be Torque from 'The Suffering.' He throws down his weapons, and after Rayden berates Kung Lao for whatever, pick up the sexy, sexy swords Torque dropped and get ready for a total rampage.

Shang Tsung:
First, what you must do is buy Combo 2. This will make your experience with the big Tsung much easier. The combo is X, X, Y, B. This takes a nice little chunk from his bar. Repeat until you get one of the lamest fatalities ever.
Kintaro:
This is too simple to even deserve a hint. All you have to do is one thing: SPAM THE ICE SLIDE! Go back and forth with the Ice Slide. Occasionally, Kintaro will lose his balance, in which you must slam him with the B button. Keep going and you'll get a major improvement over the last disappointing fatality.
Shao Kahn:
Kahn can be daunting for the inexperienced. In other words, a total prick. Use your freeze attack and Ice Slide. He deserves every bit of it. When he pulls out his big ol' hammer, things start to get hard. Scrap the Ice Slide method and pitch Kintaro's head whenever you get the chance. Keep using the freeze attack. When he starts to spin his hammer, get out of the way. Use two long jumps and a double jump if necessary. Keep on doing this until he drops.

On multiplayer choose sub-zero twice and the second person who selects him will be Noob Saibot!

Once you defeat the game with Lui Kang and Kung Lao The character menu for the single player and the ko-op menu will allow you to select sub-zero and scorpion as an alternate character even though the story is the same and you get to use their powers too.

First drop down to the pedestal and grab the sword, if you miss it don't worry. Then repeatedly attack him. If he raises his club get out of the way! and jump when he brings doen his club. Using aerial attacks can also help especially Kung Lao's aerial kicks to avode him from touching the ground.

This trick requires a full level 3 fatality meter. As soon as the battle begins, approach one of the Tarkatans (or Demon Generals if you are fighting the one in the Foundry). Hit them with the Fatality Stunner and perform a Brutality. While in Brutality mode, keep attacking the Hellbeast with quick attacks to deal lots of damage to it. It will be dead within a few seconds.

Santa Claus And Other Flying Objects In The Pit

At Goro's layer, just before you see Reptile, stand by the lion and look at the moon. Wait a short time to see Santa Claus and his reindeer, a witch, and a rocket ship. There is about a one minute delay between each of them.

As soon as you defeat Inferno Scorpion, he will be pulled down by Hell's Skeletons. As soon as he get burned to his head, he will put his thumb up. In Terminator 2 the T-101 wants John and Sarah Conner to burn him in lava, then puts his thumb up as soon as his head is under lava. Midway also produced the arcade game Terminator 2: Judgment Day.

Baraka has four strategies while fighting. The first is just a basic one-on-one fight. Use your best combos and juggles, but do not keep him in the air too long or he will strike you with his blades and knock you back. After fighting awhile, and when you damage him enough, a short intermission sequence will start, showing Baraka freeing some monks and lighting them on fire. He will then throw two monks at you that run around on fire. Do not get too close to them and pick them off. This will give you a small amount of health. Keep battling Baraka as before. Eventually, another intermission sequence will begin. After it ends, you must fight a projectile battle with Baraka. Use your hat as Kung Lao, your fireballs as Liu Kang, and keep moving and evading. This round will not too long. Once you have damaged him enough, you will see the last intermission sequence. Baraka will go berserk and gives you access to two weapons, which you will need to use against him. Pick up the weapon closest to you and start hacking away at Baraka. Note: You cannot block while holding your weapon. When he is sufficiently damaged, a Test Your Might will occur, and you must win to stun Baraka. While he is stunned, impale him on your sword. Next, pick up the other sword, damage him, and repeat the above steps. After you impale him the second time you can use your fatality and finish him.

At the main menu, hold White and press X, Up, Down, Right, Left, Black, X to unlock the classic Mortal Kombat 2 arcade game in the Kontent menu. If you entered the code correctly, you will hear a sound. Alternately, successfully complete all five Smoke missions. Note: This feature is not available in the European version of the game.

We have no unlockables for Mortal Kombat: Shaolin Monks yet. If you have any unlockables please submit them.

We have no easter eggs for Mortal Kombat: Shaolin Monks yet. If you have any unlockables please submit them.

We have no glitches for Mortal Kombat: Shaolin Monks yet. If you have any unlockables please submit them.