Use the above links or scroll down see all to the GameCube cheats we have available for MVP Baseball 2004. 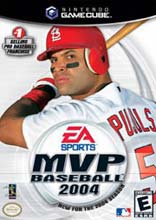 When you are batting, try to hit a triple and stay on third. When your next batter is up try and hit a sac fly to deep center. Tell your runner at third to tag up and go home. When you are very close to home plate press R to return to third. He will touch home and head back to third. He will start to go to third then and will head back to the dugout. When your next batter comes up to bat, the runner who scored will be back on third base.

Make a profile. Then get 5000 reward points. Save your profile. Go to the rewards, pick a player, then save your rosters. You can do this to get anything in the rewards. This will not get legendary teams. It's just fun to play with Babe ruth or Nolan Ryan.

Create a player named Nick Roy and make sure to save the player and your profile to unlock all MVP Rewards.

Go to create a player. His first name Jacob and his last name Paterson. Make him a "Free Agent" and in Dynasty Mode get rid of one of your players. Look for him in "Free Agents" and select him. He has a huge bat and almost every time he's up he nails a homer!