Use the above links or scroll down see all to the PlayStation 2 cheats we have available for MVP Baseball 2004. 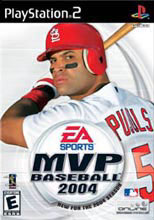 In case you haven't already noticed Barry Bonds isn't in the game but a person similar to him, Jon Dowd, is. The thing is, Jon Dowd IS Barry Bonds, and you can change it so he actually seams like it. Go to edit player and change his name to Barry Bonds, number to 25, bats left, throws left and face to whatever you feel likes Barry Bonds.

When playing Dynasty Mode in the beginning of the settings, select Draft-"Yes" and make it so you make the order. Make your team the first pick and simulate the draft so you don't have to do all the work. When you simulate it's always a different player picked first, like Pujols or Beltran.

Easy Way To Get Good People

For more MVP points go to pitcher showdown and pick whomever you want, put difficulty on MVP mode, and when you get to the game go to options and put it back on rookie mode. When you win you will get the same number of MVP points for playing on MVP mode.

Create a player named MVP, then save your rosters. This unlocks the 1986 California Angels Jerseys

Create a playere at the Roster Managment screen and make his name "Jacob Paterson". Once he is in your lineup, he can hit homeruns up to 700 feet or towering homeruns and line drives.

Create a player with the name Erik Kiss (case sensitive), and he will have a thinner bat, which is easier to break.