Use the above links or scroll down see all to the Xbox cheats we have available for MVP Baseball 2004. 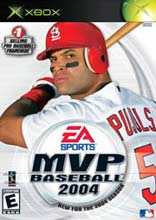 The max number of MVP points is 50,000. I know because I own everything and can't get any more MVP points.

To intentionally walk a batter hold the L button and click the right thumbstick.

To hit a homerun hold the left trigger up.