Use the above links or scroll down see all to the PlayStation 2 cheats we have available for MVP Baseball 2005. 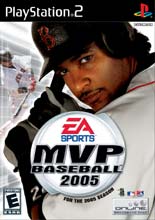 Every non-created player that has the number 86 is a player in real life. For example, the Red Sox's first baseman Anthony Friese #86 is actually Kevin Millar #15.

First pick whatever team you want to use. Then go to your roster and release every single player on your team, no matter how good they are. Then go to Create-A-Player in Owner Mode and create 2 for each position except you'll need more for pitchers. Make all of the players skills at zero and sign them for a cheap $300K, 7 year deal. Once they're on your team edit all of them and make their stats to as high as they go which is 99 or 100 depending on what you're upgrading. Since you're signing them for a cheap deal you'll be able to save tons of money, which helps you last longer and you have good players for a long time while doing that.

Use Pithcher Every Game And Does Not Get Tired

Go to edit player, go to your favorite pitcher, and increase his stamina to 99. After every game increase to 99 then you can star him every game, and he will not get tired.

Select the "Create A Player" option, then enter "Katie Roy" as a name to unlock all rewards, staduims, legendary players, and uniforms.

Player With Even Smaller Bat

Create a player and name him Neverlose Sight.

All you have to do is create/edit player. And create a player named Katie Roy.

Select the "Create A Player" option. Create a player named erik kiss (case-sensitive). The player will have a skinny bat that will break every time and send a little dribbler to the pitcher for a sure out. Also, you cannot bunt with him; it will just go foul. Note: You can use this player to your advantage: Create erik kiss, make his stats all full, then trade him to a rival team. Then, go to "Locate A Created Player", and reduce his stats. Your rival will now have a bad batter on their team.

Enter kenny lee (case-sensitive) as a created players name to increase and fully change the player's size. Each bicep and other parts of the body can be changed differently from the other. When you go to the body part it says both press X to switch it to one side or the other.

Select the "Create A Player" option. Create a player named keegan paterson, jacob paterson, or isaiah paterson (case-sensitive). The player will have a very large bat. He will hit a home run or a hard line drive every time you make contact, no matter what his stats are.

Go to "Manage Rosters" and then "create/edit player"

All rewards (jerseys, stadiums, players, and teams) will be unlocked in "My MVP Rewards"

We have no unlockables for MVP Baseball 2005 yet. If you have any unlockables please submit them.

We have no easter eggs for MVP Baseball 2005 yet. If you have any unlockables please submit them.

We have no glitches for MVP Baseball 2005 yet. If you have any unlockables please submit them.

Submit a cheat for MVP Baseball 2005