Use the above links or scroll down see all to the GameCube cheats we have available for Naruto: Clash of Ninja 2. 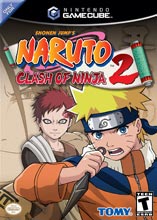 How To Become Hokage

If you select either Kakashi or sharingan Sasuke get chakara full then if you hold x. You can get a massive damage. Enjoy!

To get extra money go to oboro mode and grab all the money.

When using Haku jump in the air and hold (A) the needles will stay air born till you let go.

Select Rock Lee and fight against Gaara. Open the first link then use the special by pressing X as usual. He will do a combo before he grapples Gaara with his bandages, just like in episode 48 of the anime. Get your opponent to have his or her back to a wall. Press B until Rock does a double-kick to knock the opponent into the air, then press A to do an extra roundhouse. When the enemy's head faces the ground while he falls, press X to do Rock's special. When timed correctly, this combo takes about 50% of the opponent's life.

Because Rock Lee has no long distance attacks, you must keep up with your opponent and stay close to them. Use some of Rock Lee's aerial kicks when you are far away from your opponent. This will move him across the field a lot faster. The closer you are to your opponent, the more of an advantage you have.

Highlight a character and press Y at the selection screen.

Successfully complete the first twenty episodes of story mode to make this available for purchase at Anko's shop.

Get the best score in time attack mode to make this available for purchase at Anko's shop.

This mode is useful for earning quick money. It is not easy, but it is faster than regular fights. To make it available for purchase, you will need to buy several characters. You must buy characters in the order they appear until you have bought Mizuki. After that, return to Anko's shop and Oboro Mode (along with Orochimaru) should be available for purchase for 3,500 points.

Press Away, A when your character does their special technique.

Press Down, B(2), Forward, B(2), A, B(3), X. Neji will do a low kick, a high kick to hit the opponent into the air, a two handed blow, a punch, then pull out a kunai, have three punches, then finishes it off with Hakke Rokujyuu Hanshyou (Sixty-four Points of Divinity).

Buy all of the bonus story mode battles to make this available for purchase at Anko's shop.

Successfully complete the first twenty episodes of story mode to unlock a new episode that is available for purchase at Anko's shop.. Complete that episode to unlock the next bonus episode. There are a total of ten bonus story mode episodes that can be purchased.

Rock Lee has a lot of combos and strong attacks. He becomes stronger when he opens the Gates of Life. Try to dodge as much of his attacks as possible, or keep him at distance with long range attacks or your special technique. It may also be wise to not let him use his special technique; the more Gates of Life he opens, the more powerful he becomes and soon his Primary Lotus will become a Hidden Lotus. However you can take advantage of that and attack Rock Lee when he is done using his Hidden Lotus because his health will be very low. Make sure you also have enough Chakra and health remaining.

At the character selection screen, highlight Neji and press X to change Neji's costume. Fight against Rock Lee and use Nekki Genkai Byakugan. Notice that it seems to do a greater amount of damage to Rock Lee. While performing the attack, quickly press B, Down, Up numerous times, then Down. If you are lucky, Neji may do a group of punches and kicks.

Sasuke with Sharingan has an aerial special move. Jump in the air and press X to execute a Phoenix Flower Jutsu. This move is a range attacks that goes in a straight line. This is useful for attacking multiple enemies, but it can be blocked. One combo to ensure that you will hit your opponent (if it is only one) is Down + B, Up + B, X. Sasuke should execute a leg sweep, kick his opponent into the air, then use the Phoenix Flower Jutsu without fail. Note: Timing is essential; you must practice the combo to use it well.

1 On 2 Battles Or Triple Threat Battles

Go to battle in four player mode. Select the three characters you wish to fight with. Instead of choosing a fourth opponent, press Start. You will go to a team setup screen with a maximum of three teams instead of four. After you set up the teams, choose a location and/or handicap and begin battle.

Extra Points In The Store

Do The Hidden Lotus With Rock Lee

When the match begins, get your chakra gauge to the green mark. Then press down and x at the same time to enter into the first gate. After that push down and x again until Rock Lee says "Gate of Life Open" then it'll raise your chakra gauge all the way up. Press x when your opponent is on the ground to do the Hidden Lotus. NOTE:this will take your life to the lowest level. NOTE: You can do your special anywhere on the stage, you dont have to get close to your opponent.

Complete the unlockable story mode and the buy from the shop for 100,000 coins.

Beat story mode and keep on going to the shop. Every time you go there you can buy a character.

He's last to get in available spaces; get 7,500 coins to purchase him with in Anko's shop.

Play As Akamaru, Crow And Kankuro

Successfully complete the game to unlock the corresponding sounds for that person available for purchase at Anko's shop.

Successfully complete story mode to make this available for purchase at Anko's shop.

Successfully complete the game to unlock the corresponding character profile for that person available for purchase at Anko's shop.

Get the best score in time attack mode to make this available for purchase at Anko's shop.

Have a saved game file from the original Naruto: Clash of Ninja on your memory card.

Finish in first place in survival mode to make this available for purchase at Anko's shop.

Unlock Kankuro and then get 3500 more points.

Complete story mode and buy from shop for 2000 coins.

Unlock Iruka and Sharingan Kakashi and then get 15000 more points.

Complete story mode and buy in shop for 2000 coins.

Unlock Guy Sensei and then get 2500 more points.

Beat 1 player mode with neji, guy wil be in the shop.

Unlock Iruka and then get 3000 more points.

Unlock Neji and buy from shop for 2500 coins.

Unlock Crow and Akamaru and then get 5500 more points.

Unlock every unlockable character other than Sharingan Sasuke and then get 50000 points.

Unlock Iruka and then get 4000 more points.

We have no easter eggs for Naruto: Clash of Ninja 2 yet. If you have any unlockables please submit them.

We have no glitches for Naruto: Clash of Ninja 2 yet. If you have any unlockables please submit them.

Submit a cheat for Naruto: Clash of Ninja 2