Use the above links or scroll down see all to the GameCube cheats we have available for Naruto: Clash of Ninja. 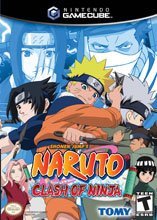 You must defeat One Player Mode as every character twice. However, it cannot be done in any order. You must play through once as each character to unlock all of their Ninja Files, and then repeat the process to unlock Naruto's Kyuubi form. Then by pressing X over Naruto at the character selection screen you will play as demon Naruto in his orange suit. If you press Z however, he will wear his alternate red clothing.

To do this you need to beat one player mode with all the people at least 4 time to unlock it. When you do, press X when you select naruto for his demon form.

When you have Sharigan Katashi. You have to press A and leftt at the same time. When your oppenent uses thiere special move. When they hit you it will start. (it doesn't work on Haku)

Beat Zaibuzan in story mode without using continues, and then beat Rock Lee when he appears.

What you have to do is on the character selection screen, pick Kakashi, and it won't matter who your opponent picks. When you are in battle push the thumbstick awayfrom your opponent and press "A' at the same time, and Kakashi will start reading his book. If your opponent attacks Kakashi up close, he will use the "Thousand Years of Pain" attack. (NOTE: This does not work with ranged attacks.)

Beat one player mode with Sasuke, using all of the difficulties(1-4), without losing to anybody.

At Character selection screen press X on Haku and he wiil be shown with no mask on.

To unock Sharingan Sasuke (well it ain't easy at all) just play as him on one player mode and get a score of 999,999 and get a ranking as Hokage. You must do this 13 times and get the same score every time. If you even get one point over the score I listed, you have to start over.

You know how Haku wears a mask? Press X instead of A when you choose him, and you can play without the mask.

After you unlock Rock Lee, you must beat 1 player mode as everyone twice, then it will say you unlocked Kyubi Naruto (aka Nine tailed fox.)

After you've unlocked Kyuubi Naruto (Fox Demen Naruto) play as Kakashi in one player mode and without losing and having to continue, complete it and you will get a message saying you've unlocked Sharingan Kakashi!

All you have to do is go through story mode undefeated to unlock him.

We have no cheats or codes for Naruto: Clash of Ninja yet. If you have any unlockables please submit them.

We have no unlockables for Naruto: Clash of Ninja yet. If you have any unlockables please submit them.

We have no easter eggs for Naruto: Clash of Ninja yet. If you have any unlockables please submit them.

We have no glitches for Naruto: Clash of Ninja yet. If you have any unlockables please submit them.

Submit a cheat for Naruto: Clash of Ninja