Use the above links or scroll down see all to the Wii cheats we have available for Naruto: Clash of Ninja Revolution 2. 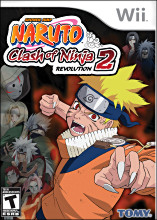 To get naruto ninetails you need a full chakra gauge and naruto's health in the orange zone. Then use secret technique + control down. He will burst in chakra and become nine tails nauto. NOTE: this tip will only last till the round is over.

When you are close to the opponent press down secret tech only in two man sqaud. It will do combo tech.

Choose kakashi and sasuke and do team combo then sasuke and kakashi will do lightingblade/chidori and hit.

So I was Playing and then I was wondering "Hey does Towa and Komachi have a combo? " so I tried it, and it worked! So to do this you press the special and on the "Nunchuck" press down or side-ways and it will work!

Kabuto goes under ground and touches your legs you fall to the graund and orochimaru summons a giant snake and the snake body slams you.

Choose Shikamuru and Choji in double battle. Do the double attack ( stick faceing opponet while pressing right on remote). Choji will use Expansion jutsu then jump in the air while Shikamru uses Shadow Possession jutsu and Choji will fall on the opponet!

Select Orochimaru and Kabuto then Battle someone. Then while playing, step back a little then speed run up to them. While speed running run to them, press left or right then Kabuto will go behind him and make their feet where they can't move then Orochimaru will do summoning jutsu and Orochimaru's Snake will slam his on The Person.

When you choose lee and guy press down on the nunchuck and down on the wii remote then lee will run and punch you to the side then guy will punch in the air then guy and lee will use dobble primary lotus.

When in the team character select screen, choose Itachi and Kisame. To perform the team combo, use the normal buttons, but press the direction your opponent is facing. Itachi will pull the opponent into the Tsukuyomi and stab him, then Kisame will go in and slash the opponent with his sword.

The Best Way Or

The best way to do this is to start out with story mode difficulty 2 and we know it's a little tough but after you do that start out by doing mission completion in this order: Kurienai, Asuma, Orochimaru, Anko, Baki, Yugou, Itachi, Kisame, Kabuto, Bando, Kagura, and then whatever order you choose to unlock look at other cheat codes in the mission mode cheat codes.

To unlock everyone you first need to unlock survival mode then do 1, 000 battles and will get every one even nine tiles naruto and second state sasuke note:it needs to be in survival and they don't need to be in a row so you can lose and keep going and still unlock everyone.

Beat 9 tailed naruto and sasuke with each other 20 times.

How To Get Baki

Do the first three and last three mission of that character.

Beat score attack with Sasuke with at least 200000 points.

We have no easter eggs for Naruto: Clash of Ninja Revolution 2 yet. If you have any unlockables please submit them.

We have no glitches for Naruto: Clash of Ninja Revolution 2 yet. If you have any unlockables please submit them.

We have no guides or FAQs for Naruto: Clash of Ninja Revolution 2 yet. If you have any unlockables please submit them.

Submit a cheat for Naruto: Clash of Ninja Revolution 2