Get the latest Naruto: Clash of the Ninja Revolution cheats, codes, unlockables, hints, Easter eggs, glitches, tips, tricks, hacks, downloads, hints, guides, FAQs, walkthroughs, and more for Wii (Wii). CheatCodes.com has all you need to win every game you play!

Use the above links or scroll down see all to the Wii cheats we have available for Naruto: Clash of the Ninja Revolution. 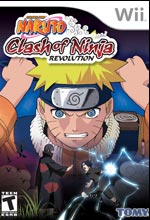 It's the same as to hit your opponent except you have to keep pressing the Z and B button on the WII remote those are the substitute buttons and if done correctly your character will look like it's about to hit your opponent but teleport on the ground.(But be warned sometimes they will turn around in the air so you don't have the advantage you wanted and they won't slam into the ground and take damage either).

Naruto is the best character to do survival mode with because one, if in a crisis, you can summon the Nine-Tails Chakara. This can give you incredible power to comeback from a messy sitution plus, if you win the battle you can recover stamina from the Burst of Red Chakara and when you enter the next battle which also heals some of your stamina and the second reason is that you can use a Shadow Clone to help assist you by pressing Control stick left + A.

Easily Get Through Mission 11

Instead of battling it out with Itachi and risk losing just keep pressing down a to use that Jutsu where you go underground. its time consuming and you usually wont get hit back.

To unlock the 4th Hokage, defeat the game's story mode on the fourth difficulty.

To unlock a new mini game all you have to do is play the previous one a couple of times to get the next one.

To attack while changing areas Continuously shake the WII remote and your character will punch your opponent.(But be warned your opponent can dodge your attack if that happens they won't hit the ground and lose health).

The fastest way to beat the game is to use your specials whenever possible and keep a high defense.

We have no cheats or codes for Naruto: Clash of the Ninja Revolution yet. If you have any unlockables please submit them.

To unlock this, you have to beat Story mode in Hard Note: (this will not work if you beat the whole game)

To unlock Kisame, beat single player with Might Guy.

Go to mission mode and beat the second mission. Then, go back to main menu and TenTen will be unlocked.

We have no easter eggs for Naruto: Clash of the Ninja Revolution yet. If you have any unlockables please submit them.

We have no glitches for Naruto: Clash of the Ninja Revolution yet. If you have any unlockables please submit them.

Submit a cheat for Naruto: Clash of the Ninja Revolution